The DESI Legacy Imaging Surveys says it produces a model of “the 14,000 square degrees of extragalactic sky visible from the northern hemisphere”. But I thought the whole celestial sphere (like any other sphere) had only $(180/\pi)^2 \approx 3282.8$ square degrees. How should I understand this? Is this counting each of the 7 bands it scans in (in which case it’s an average of 62% of the whole sky)?

This doesn't solve the disparity however. Perhaps the key is the term "extragalactic sky" that is used in the referenced web page. Is there a cutout in the coverage to account for the Milky Way?

GrapefruitIsAwesome has already explained why the sky is significantly larger than 3300 square degrees; I'd like to explain why the sky coverage is precisely the value it is.

The wording is admittedly not ideal. The portion of the sky visible to the surveys are limited by 1) dust in the Galactic plane that prevents them from observing extragalactic sources beyond it, and 2) the finite declination range of a given telescope, arising from both its latitude and the limits on its elevation range.

Dey et al. 2019 provide basic parameters of the DESI surveys; that $\approx14,000$ deg$^2$ area is defined to be the portions of the sky with galactic latitudes above $15^{\circ}$ (the Galactic plane at work) and declinations of $\delta>-20^{\circ}$ (the limit imposed by the position of Kitt Peak, one of the observing sites). Dust in the plane actually cuts this into two separate regions, the North Galactic Cap and the South Galactic Cap, which together have the total area listed. Even this is in fact slightly modified even further, to "minimize scheduling issues" and to avoid regions with more stars - not an excellent thing to have in an extragalactic survey.

Here's what this ultimately looks like (Fig. 1, Dey et al.), with the regions surveyed outlined in red. The other shading and labels denote coverage by other spectroscopic surveys. 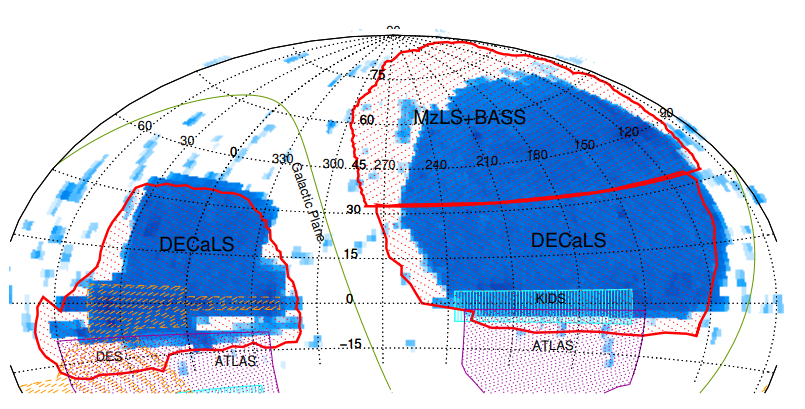 Not the answer you're looking for? Browse other questions tagged mathematics terminology sky-survey .