But what is the basis of 1pm in Greenwich ?

My question really is, what is the basis of Greenwich mean time or clock time ? Because if there's no actual point of reference, then does LMT of other places makes any sense ?

Since sun movement is not static (equation of time), so only clock can measure constantly. I get that. My problem is, when is the starting point or day in history to begin the constant measurement ? Like 14 April 2022 is when solar noon is at 12pm clock time. So can the measurement starts from that point ?

Local Mean time is based on the Average position of the sun.

The actual sun might not be on the meridian at noon LMT but on average. Some times the sun moves faster and sometimes slower (for example due to the elliptical orbit of the Earth).

But if you replace the sun with an orb that moves constantly and has the same average motion as the sun. This orb will be on the Meridian at noon each day.

To work out the local mean time you need to observe the sun over a period of a year to find out it's average motion over a year. This is what astronomers did in Greenwich hundreds of years ago. Once they had worked out how the real sun deviates from the average sun, they could use the real sun to work out the Greenwich mean time. They could then use the sun as a very accurate clock.

In practice the real sun doesn't deviate very far from the "average sun". 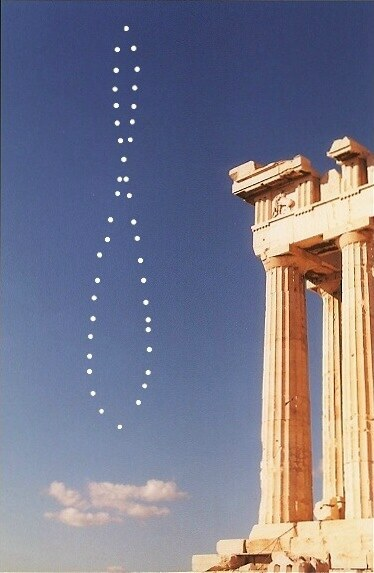 This is the position of the sun at noon. (From http://www.perseus.gr/Astro-Solar-Analemma-102816.htm) You see the figure-8 shape. The average sun would just go up and down over the year.

Greenwich mean time is just the mean time in Greenwich. It was the basis for "Universal time", which is based on the rotation of the Earth. It is convenient to calculate your local mean time from Universal time, rather than do your own measurements of the local sun to calculate an average motion.

Time zones have a reference meridian where the average noon is at 12h local time (disregarding daylight saving).

The location of the 0° meridian is essentially totally arbitrary and goes through Greenwich observatory just by definition and convention and general agreement between the countries to faciliate a common understanding of time. Before that definition was adopted, Paris tried to become the defiintion of 0-meridian as well, still documented in its observatory, not at ~2°E. The internationally agreed-upon time reference is UTC. Without such agreement, one could not meaningfully communicate time. The same is true for the definition of basically every unit, be that to know weight or temperature or length: Essentially the definition of "1m" is arbitrary - just chosen to be convenient within the system of all units. Each country essentially decides independently what offset to GMT they want to use, thus chooses its own time zone. For convenience usually this is done in one hour steps, though there are some time zones which have fractional offsets like UTC+4:30h.

The difficulty with the time of the meridian passage of the Sun is that for a fixed 24h clock, the time of local noon changes daily - you write that yourself. The annual variation is around +- 15 minutes. This is described by the equation of time and is expression of the ellipticity of Earth's orbit.

The definition of time is done by international agreement via UTC which is defined by a weighted mean derived from atomic clocks all over the world run by the national standardization institutions. There must have been an agreement on how to establish the initial synchronization (thus the 0-offset at the time UTC and TAI were introduced), but I don't find this value referenced other than that TAI was synced to the previous existing time definition in 1958.

Like 14 April 2022 is when solar noon is at 12pm clock time. So can the measurement starts from that point?

The modern definition of the Equation of Time (EOT), according to the Astronomical Almanac of the USNO, is that it's the difference apparent solar time minus mean solar time. The EOT has two principle causes: the eccentricity of the Earth's orbit, and the tilt of the Earth's axis relative to the ecliptic (the Earth's orbital plane), known as the obliquity of the ecliptic. This gives the graph of the EOT two principle components. The eccentricity gives a sine wave with a period of one year. The obliquity gives a sine wave with a period of six months. Here's a graph (created in Sage using the simplified EOT formula on Wikipedia) which shows these components. 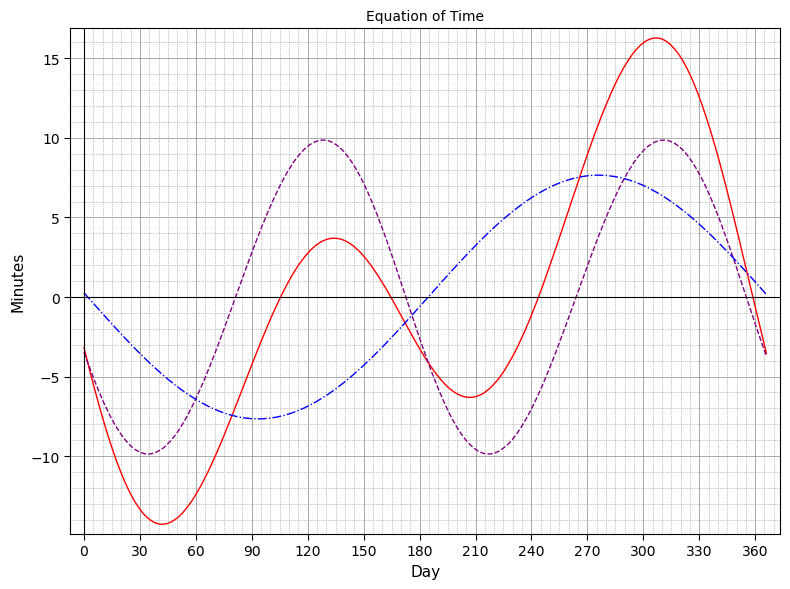 Here's another approximate graph of the EOT. 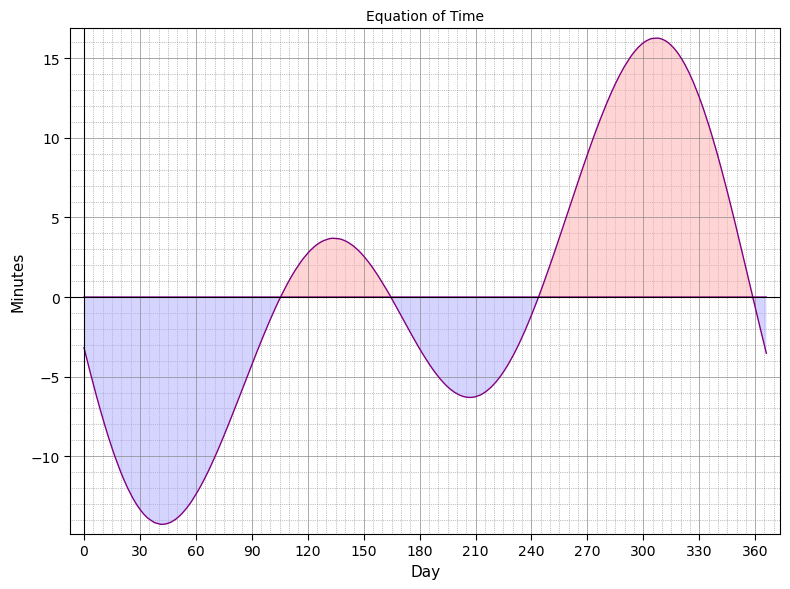 Over a one year cycle, the mean solar time is the mean of the apparent solar time, so the red portion of the graph above the X axis has the same area as the blue portion below the X axis.

Consider a first fictitious Sun travelling along the ecliptic with a constant speed and coinciding with the true sun at the perigee and apogee (when the Earth is in perihelion and aphelion, respectively).

You mentioned "Equation of Time," so you should be able to answer many of your questions yourself. You understand the problem. The Wikipedia article will tell you more than you want to know. There are 4 days during a year when EoT is 0.0 seconds. Are you just concerned with the exact EoT vs. local or civil time? How much precision do you need?

Not the answer you're looking for? Browse other questions tagged the-sun .

6
The moon rises at a different time each day, but that difference changes. Why?

3
Math for calculating the terrestrial longitude directly under the sun with time
3
What is the abbreviation for solar time, hour angle of the sun?
3
How to calculate the maximum and minimum solar azimuth at a given location?
8
Effect of the obliquity of the ecliptic / tilt of the Earth on the equation of time
2
Computation of mean sidereal time at Greenwich using solar position algorithm
2
Geographical Point of the Sun
6
A vertical stick's shadow at solar noon should be straight north/south, right?
1
Sundial terminology
4
Does the earth spiral around the sun's movement/motion path?