Which planet came first in our Solar system?

The planets (probably) formed by the accumulation of planetesimals, and they all formed over roughly the same time span. Inner protoplanets had access to more matter, so they probably were able to accumulate that matter faster. On the other hand, a lot of the matter in the Solar System is volatile, so it's more likely to condense in the colder parts of the protoplanetary disk.

Also, gravity favours a "greedy" formation mechanism. A more massive protoplanet will tend to accumulate matter faster than a smaller protoplanet in the same region, due to its stronger gravity.

Most of the matter in the Solar System outside the Sun is in Jupiter, so it's reasonable to assume that Jupiter was an early winner in the matter gathering contest. There are good reasons to believe that Jupiter actually formed closer to the proto-Sun, migrated even closer, and then migrated outwards when it had accumulated a large fraction of its mass.

the grand tack hypothesis proposes that Jupiter formed at 3.5 AU, then migrated inward to 1.5 AU, before reversing course due to capturing Saturn in an orbital resonance, eventually halting near its current orbit at 5.2 AU.

We can use computers to test theories of Solar System formation. You set up a mathematical model with a bunch of planetesimals, dust, and gas orbiting the proto-Sun, and then crunch the numbers to see if it evolves into something resembling the real Solar System. If it does, your model might be correct. If it doesn't, you adjust the parameters and try again. This process consumes a lot of computing power, since you need to make accurate gravitational calculations involving hundreds and thousands of objects. So the people doing this research generally run their models many times, looking for solid trends, and to help them weed out effects that are due to errors caused by the modeling calculations.

These studies have found that it's quite likely that a lot of planetesimals were ejected into the outer Solar System, or even out of the Solar System's gravitational well and into interstellar space. And of course a lot got thrown into the Sun.

One current theory of late system formation is known as the Nice model, originally published in 2005. However, as that article mentions, more recent research indicates that the Nice model needs some adjustments.

A study from 2011 claims that there's a high probability that our system originally had 5 giants, but one of them got thrown out of the system.

Recent studies of solar system formation suggest that the solar system's giant planets formed and migrated in the protoplanetary disk to reach resonant orbits with all planets inside 15 AU from the Sun. After the gas disk's dispersal, Uranus and Neptune were likely scattered by gas giants, and approached their current orbits while dispersing the transplanetary disk of planetesimals, whose remains survived to this time in the region known as the Kuiper belt.

Here we performed N-body integrations of the scattering phase between giant planets in an attempt to determine which initial states are plausible. We found that the dynamical simulations starting with a resonant system of four giant planets have a low success rate in matching the present orbits of giant planets, and various other constraints (e.g., survival of the terrestrial planets). The dynamical evolution is typically too violent, if Jupiter and Saturn start in the 3:2 resonance, and leads to final systems with fewer than four planets.

Several initial states stand out in that they show a relatively large likelihood of success in matching the constraints. Some of the statistically best results were obtained when assuming that the solar system initially had five giant planets and one ice giant, with the mass comparable to that of Uranus and Neptune, was ejected to interstellar space by Jupiter. This possibility appears to be conceivable in view of the recent discovery of a large number free-floating planets in interstellar space, which indicates that planet ejection should be common.

It depends what you mean by "form". The planets all began their formation at more-or-less the same time in the first few hundred thousand years after the protosolar cloud contracted. But they ended their formation process at different times.

Solids and planetesimals begun to condense within a few hundred thousand years and the first planetary-sized bodies (say Moon-sized and above) likely formed within 1-3 million years in most parts of the protosolar system. In the inner Solar System where the density of solids was higher, it is possible that the timescales for the accumulation of these solid protoplanetary bodies would lengthen moving outward to lower density regions. However, Spitzer & Kleine (2021) show, using various radiometric dating techniques, that ancient meteoritic bodies, whose isotopic composition indicates they formed at different radii in the protoplanetary disk, nevertheless began their formation within a million years or so of each other.

These protoplaneta and planetesimals are not the fully-formed planets we see today. The inner Solar System likely endured 10-100 million years of turmoil and collisions before settling into the 4-planet arrangement we see now. Our own Moon is evidence of one of these titanic collisions.

Current models for the formation of Jupiter suggest it fully-formed in about 5-10 million years because the accretion of its gas envelope onto a rocky/icy core (once it had accumulated) would have been very rapid. I think it is fair to say "Jupiter formed first" in the sense of arriving at close to its final state earliest (a view shared by Kruijer et al. 2017 on the basis of meteoritic dating as well as the results of hydrodynamic models). Saturn would have been a little slower because its core would have formed later than Jupiter's and the gas density would be lower further out.

The ice giants may also have been fully formed after about 10-20 million years too, but in the sense that their slower growth may have been truncated by the dispersal of the protoplanetary gas disk at that time. In fact it is unlikely that Uranus and Neptune formed where they are found because the growth rate prior to disk removal would have been too slow.

It is fair to say that a lot of the details of this picture are still being worked out. A massive uncertainty, in my opinion, is how long the protoplanetary disk survived and whether and at what rate it cleared from the inside outwards. This timescale is essentially the timescale for the formation of the giant planets (although Jupiter may have been large enough to essentially accrete all the gas it could prior to disk dispersal). It also sounds the starting gun for the period of chaotic rearrangement and collisions in the inner Solar System, because prior to gas removal the drag would have kept the planetesimals in well-behaved orbits.

As a supplement to the other fine answers already posted, I'd like to post an image of the disk surrounding the star HL Tauri, created in 2014 using ALMA, the Atacama Large Millimeter Array in Chile. 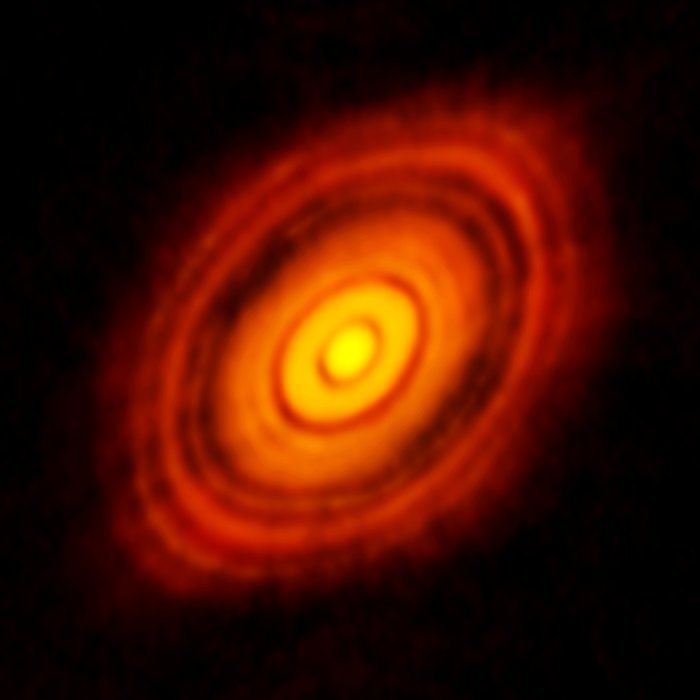 These features are almost certainly the result of young planet-like bodies that are being formed in the disc. This is surprising since such young stars are not expected to have large planetary bodies capable of producing the structures we see in this image.

While this certainly isn't proof that all the planets in our Solar System developed around the same time, this image certainly lends support to the earlier models of near-simultaneous planet formation from a protoplanetary disk.

The old theory about the formation of the planets was that they were torn from the Sun by a chance passing star and condensed into solid bodies.

It was also believed that the planets solidified from lava into solid rock faster the farther they were from the heat of the Sun. Thus the outermost planet would be the oldest and the innermost planet the youngest.

But that theory of planet formation has been obsolete for about 70 years.

The present theory is that the planets formed out of a disc of gas and dust left over from the formation of the Sun. Motes of dust that collided at slow enough speeds clumped together to form larger dustballs. Eventually pebble sized objects were formed, and boulder sized objects, and ever larger objects. Eventually there were countless thousands and millions of plenetesimals which gradually clumped together to form larger masses. And some of those masses eventually had high enough escape velocities to capture and hold gas molecules.

And there are many theories about that process and how it operated. So possibly some theories might claim that some of the present planets began forming and/or completed forming earlier than other planets. But the formation periods of all of the planets probably had a high degree of overlap.

17
How do we know that the planets of our solar system began their formation at more or less the same time?
4
Could or has a Ninth planet ever be "formed" in our solar system?