Jupiter FM - What are practical and inexpensive ways for the amateur detection of signals from Jupiter, especially of the transit of her moons?

What modifications to a standard AM/FM or shortwave radio are needed in order to be able to detect radio-wave signals emitted from Jupiter?

Would it be possible to detect the transit of the major moons and even minor planets (maybe even Ceres and Mars) using this method?

@Arne is right in his answer about two things, that the most suitable frequency for Jovian amateur radio is 20.1 MHz, and that this is a 15 meter wavelength. However, the antenna can actually be half the wavelength, and amateur radio astronomers have had good results listening to all kinds of Jovian sounds, including detecting occultations of its many moons as they produce change in frequency due to the Doppler shift when passing in front of it, amplification due to echo of Jupiter's own radio wave signature when close beside it from the observer's vantage point, and other effects causing radio wave frequency and amplitude changes with a simple dual dipole array that might look something like this: 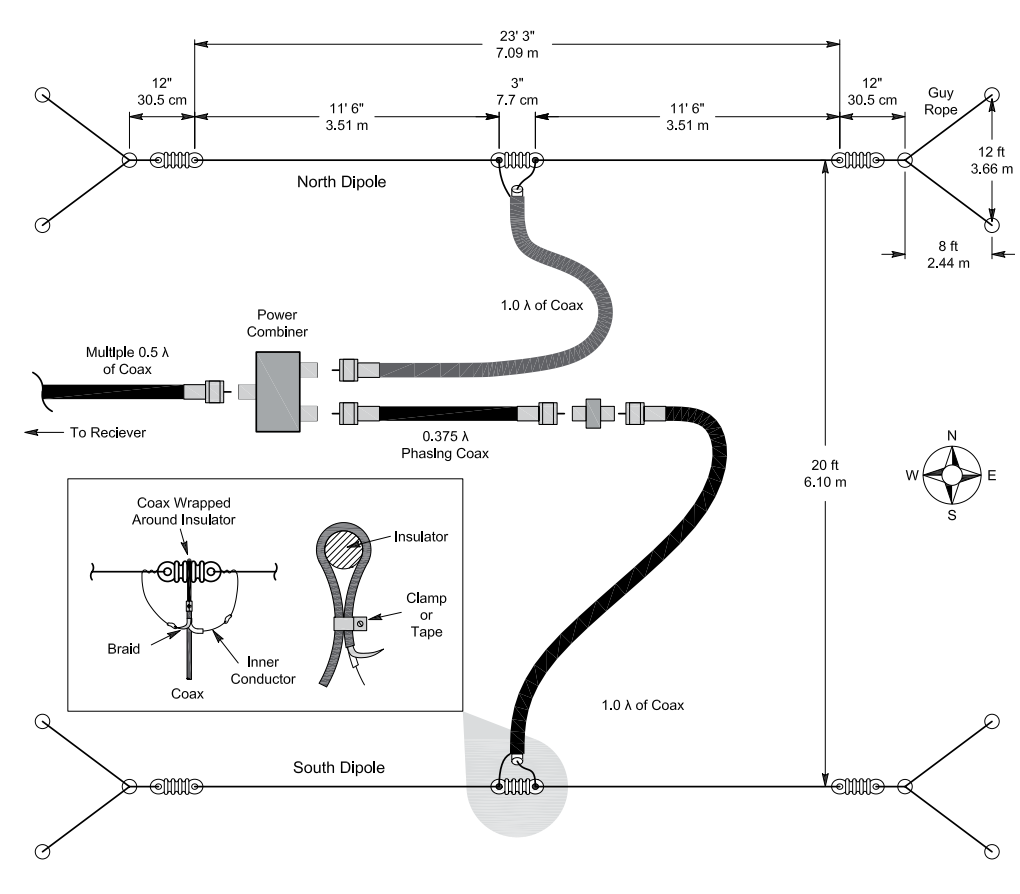 The Jove dual dipole array. Dipoles are suspended between PVC masts. Signals from the dipoles go to a power combiner and
then to the receiver. Source: Amateur Radio Astronomy Projects — Radio Signals from Jupiter (PDF)

Now this dual dipole antenna is more or less a simple two-piece of roughly half the wavelength of coaxial cable, stripped of insulation at the dipole ends and run dipoles parallel to each other at roughly 6.1 meters (20 ft) apart suspended over PVC masts. That is perfectly acceptable for nearly any amateur radio astronomer in both space and the price of the parts needed. There are also ways to help oneself with a lot smaller antenna, which I'll mention a bit later. Let's first clear the frequency range discussion with this really informative quote from Radio Receiver for Jupiter webpage (based on NASA's Radio JOVE project):

The peak of Jupiter signals occur around 10 MHz. Still this frequency is not that suitable, as it is very near to Ionospheric cutoff. The best suitable frequencies are in between 18 to 22 MHz, as the chances of getting emissions are more. In practice 18.7 MHz, 20.1 MHz, 22.3 MHz are common. The frequencies above 30 MHz are not suitable because of less strength. The frequency of 20.1 MHz is used for this project, as the probability of getting emission is high. So the entire receiver is designed considering 20.1 MHz as the operating frequency.

Antenna is of course merely one part of the story. Second thing that is required is the receiver. NASA is sponsoring Radio JOVE project with an assembly manual for roughly 100 electronic components and pieces of hardware worth RJ1.1 Receiver (Radio Jove 1.1 Receiver) that can be almost completely assembled out of parts ordered from Radio Shack (it even includes RS part numbers). I'll add a photograph and a few other links, and you'll have to be on your own then: 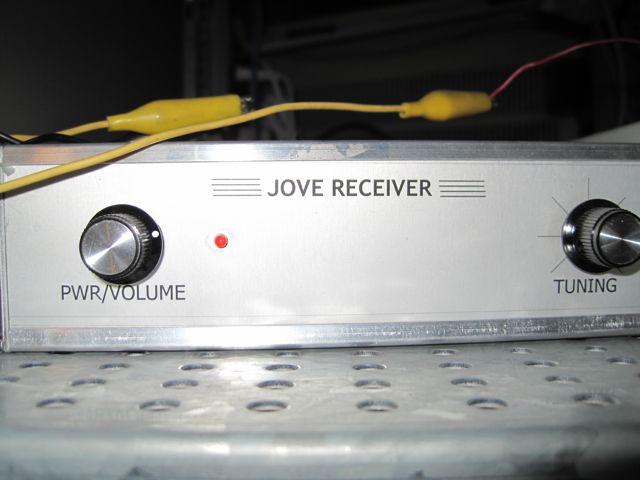 Some relevant links for building Radio Jove (or Jupiter FM, if you like, it will be your own receiver so name it as you wish), starting with already mentioned ones:

So there are indeed many ways to build your own antenna and receiver out of affordable and easily obtainable electronic parts, and some of these websites listed above will help you through the process of self-assembly, even providing some tricks how to do it easier, like for example assembling a smaller, in-house antenna array.

Now, one other thing that all these websites mention is also using various PC software that lets you analyze through computer's sound card received Jovian radio sounds, but since there's many different and free solutions out there, including NASA's own that runs on Windows PCs, I'll let you discover those on your own. Here's one page listing many links, to get you started. More computer savvy of you might even write your own software for this purpose, this is Stack Exchange afterall.

And if anyone is wondering what such self-assembled radio receivers and antennas are capable of, here's a link to a collection of various Jovian sounds in the radio wavelengths on Astrosurf.com, and another one as a collection of solely amateur radio astronomy sounds of Jupiter and its moons (scroll a bit down to the list of recordings). And here's a short description of various sound types one might hear:

And so on. The last two on the list are probably a bit of a stretch for amateur astronomers, with auroral radio emissions average frequency range at 100 to 500 kHz, and whistlers cutoff at usually around 30 kHz, and both requiring too big antennae, but I wouldn't bet against it being possible with smaller antennae either, although bow frequency cutoffs might prevent identification of actual aural events. But there are many other sounds to listen to both from Jupiter, as well as it's many moons, mostly though the bigger and closer ones.

Good luck tuning in to your own Jupiter FM and happy hunting for rare radio frequency events!

The StarGazers lounge featured a radio kit article for Jupiter radio astronomy. The same article is also featured over at the Radio Group of BritAstro.

It seems that 20.1 MHz is the suitable frequency for amateurs observing Jupiter. I am far from being an expert for radio astronomy, but for a small source such as Jupiter, I would assume that you need a big parabolic dish (for antenna gain and directionality), and a proper feed antenna, suited for 20.1 MHz. You will probably also need to have a motorized mount for the antenna, to track the motion of Jupiter across the sky.

I will post more info, after I have asked a friend, who's an expert on antenna design, which configuration may be suitable.

Edit: Ok, the infos are in. A parabolic dish is out of the question -- 20 MHz corresponds to about 15m wavelength. And dishes need to be many multiples of a wavelength. So we could use a dipole antenna, but those are not very directional. Also, the dipole needs to be rather large, for good gain. To make it directional, you need an array of steerable dipole antennas.

Summary: I think it is not really feasible to do this on an amateur scale. Of course, I am gladly being proven wrong!

There are posts mentioning it not being practical for amateurs because of the size of the antenna (generally) required combined with the need to "point it" in the right direction.

One answer to this is -- if you can just point a static antenna structure toward the sky (front poles supporting the forward-most element higher than the real-most support poles supporting it, thereby angling the beam toward space) then you simply let Earth be your antenna motor. The excitement comes from waiting for the precise time that Jupiter naturally moves through your window of opportunity. This is a wonderfully feasible method of aiming huge wire antennas toward space for pretty low frequency signals of all kinds.

As far as "never knowing if it's just a terrestrial signal", for one thing, man's signals are not super-ultra-wide band like that. Receiver parameters should be set before being aimed at Jupiter, and results compared before and after. Plus there are all sorts of other tests and identification factors. With enough know-how, which is the free and laborless aspect of it, one can rule out man and extraneous natural interference.

At a minimum, you'll need a highly directional antenna appropriate for the frequencies in question (I do not know what they are). The radio would also have to able to detect the frequencies that you expect to hear signals on.

9
How big a dish do I need for radio astronomy?
7
What radio frequency ranges are most beneficial for astronomy?

19
What practical considerations are there for amateur observations of transiting exoplanets?
19
What are practical considerations for backyard radio-astronomy detection of black holes?
1
What kinds of stars would it be possible to observe in M31 with a small amateur telescope?
8
Why are the ALMA receivers' ADCs only 3-bits?
6
What colours can rocky planets (or moons) have
15
The compatibility of the Grand Tack hypothesis with the "core-warping impact" theory of Jupiter's diffuse core
7
What radio frequency ranges are most beneficial for astronomy?