As we know, Type Ia supernovae are used as standard candles since their absolute luminosities are expected to be roughly constant. The consensus model, as seen from the Wikipedia page, suggests this is because Type Ia SNe come from a binary star system with a white dwarf and a red giant, where the mass of the red giant slowly accretes onto the white dwarf, until it reaches the Chandrasekhar limit, where runaway thermonuclear fusion begins, causing the supernova.

Question. If only <20% of Type Ia SNe are single-degenerate and have a fixed luminosity, then how can we use them as standard candles at all?

I get the impression from the above paper that it is in general very difficult to understand whether a particular Type Ia supernova fits into the single or double degenerate scenario. In this case, how can we have any confidence in distance measurements with Type Ia SNe?

The fraction of type Ia explosions caused by single degenerate (SD, mass accretion from a "normal" companion) and double degenerate (DD, white dwarf mergers) is highly uncertain. That is because there are no unambiguous observational distinguishing characteristics in the majority of cases.

It is quite feasible, or even likely, for a DD merger to produce a supernova that looks similar to that produced in an SD scenario. That is because in both cases, the thing that explodes is a near-Chandrasekhar mass white dwarf. In the SD case, mass is accumulated from a higher mass, non-degenerate secondary until it approaches the Chandrasekhar limiting mass and ignites. In the DD case, the mass is accumulated from the tidally disrupted lower mass white dwarf in the merging system; it is then (only) the primary WD that explodes, again at just below the Chandrasekhar mass.

There are I suppose two (main) questions that are important for using Type Ia supernovae as "standard candles". Can the observational characteristics of a given supernova be used to "standardise" the candle and hence estimate its absolute luminosity; and is the standardisation calibration universal, in the sense of being the same at all cosmic epochs and hence distances?

The answer to the first question appears to be yes. The majority of local type Ia supernovae (with distance established by other means) appear to follow a reasonably tight relationship between light curve width and peak absolute magnitude. This is known as the Phillips relationship. There are outliers - maybe at the 20% level - but most of these do show other observational peculiarities and could be filtered out given sufficiently detailed data for more distant supernovae. An example is shown below. 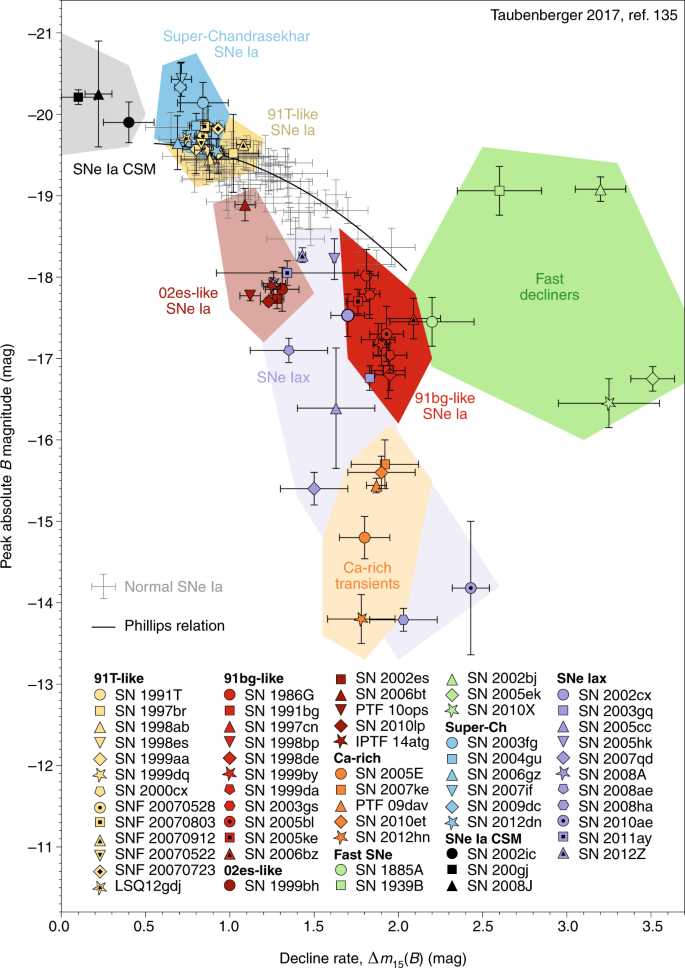 The relationship between absolute magnitude and light curve decay width/rate for local type Ia supernovae (from Taubenberger 2017). The majority of SNe follow the tight Phillips relationship that facilitates their calibration as standard candles, but there are a significant fraction of outliers.

The answer to the second question is more uncertain, since one might expect changes in the relative proportions of SD and DD progenitors at different cosmic epochs and metallicities. DD supernovae are likely to have shorter delays between star formation and explosion and so could be more predominant at higher redshift? The balance of progenitor types could be different in different metallicity environments? Whatever dispersion exists in the Phillips relation is likely different for SD and DD supernovae and so this could bias results.

There are no firm answers to these questions as yet, but the premise of your query isn't quite correct. Although many, if not most, SN Ia explosions may have DD progenitors, the majority of (local) SN Ia follow a tightly empirically calibrated absolute magnitude vs light curve duration relation.

Not the answer you're looking for? Browse other questions tagged observational-astronomy distances supernova white-dwarf .

4
How massive does a main sequence star need to be to go type 1 supernova?
4
How bright can white dwarf stars glow as they accrete matter?
6
If a white dwarf collides with a giant star, could it create a TZO?
6
Why does the Chandrasekhar limit affect white dwarfs differently?
2
What is the most distant observable White Dwarf known?
3
Searches for dipole form of anisotropies (on luminosity distances) in the universe with type Ia supernovae
1
Do white dwarfs lose mass as they fade to black dwarfs? Is there a correlation between temperature, mass, and radius?
8
The colour of blue dwarf stars