Why will HD 84406 be chosen as the first target for testing JWST?

HD 84406, is a star approximately 241 light-years away in the constellation of Ursa Major. HD 84406 will be the first star to be imaged by the James Webb Space Telescope in order to test the focus of the telescope. The star is a spectral type G star and has a high proper motion.

Why aren't the other more popular stars like Alpha Centauri or Betelgeuse chosen for the first light instead?

Which properties of HD 84406 make it beneficial to the telescope mirror testing? Spectral type? Magnitude? Distance? Does the star have any interesting stuff? Or is it just for the reason that the position of the star is the most convenient for JWST to locate during the test process?

The most important selection criterion is that the star should be available for observation for a prolonged time.

Because James Webb observes in the infrared, it must hide the Sun (and Earth and the Moon) behind its sunshield, and can hence only observe some 39% of the sky at any given time (source: NASA). Webb needs around three months for its optical alignment, so we need a star that has just entered its field of view$^\dagger$.

In addition to this, we also don't want a star in a field that is too crowded, and HD 84406 is located in a rather isolated region in the NW part of Ursa Major: 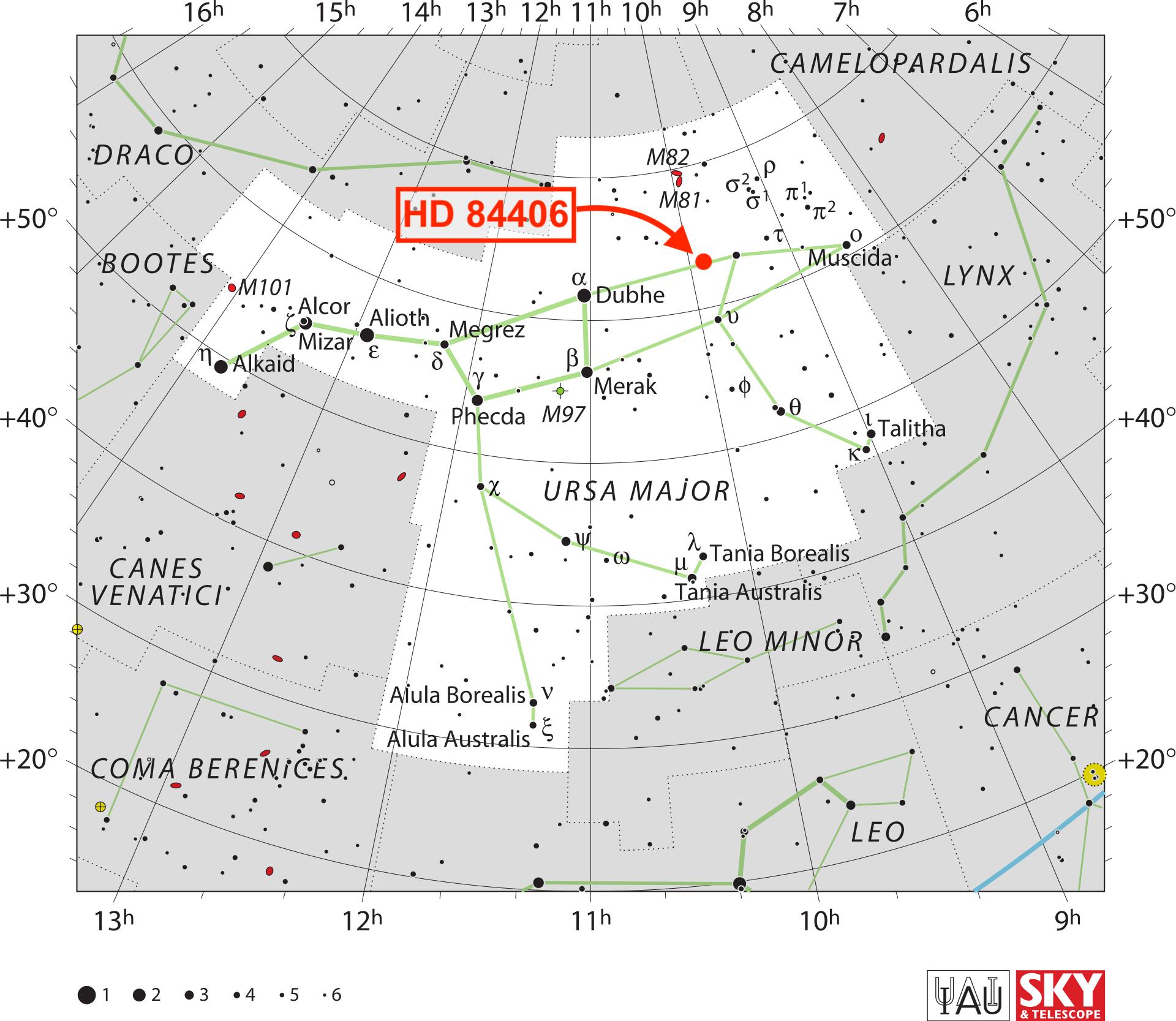 The star should be bright, but probably not too bright (like Betelgeuse), since we don't want to burn MIRI off from the beginning. EDIT: After discussing with several colleagues, damaging MIRI permanently is probably not going to be an issue. Bright sources can however damage the detector temporarily, showing a "ghost image" of the star in subsequent exposures. I've done that myself on a 1.5 m Earth-based telescope, and JWST has a ~20 times larger area, and ~10 times higher resolution, meaning several 1000 times more photons per pixel.

Anyway, as you see there are some important constraints, but many other stars would fit as well; there are quite a lot to choose from.

And the best part: HD 84406 is a magnitude 6.9 star, so while you can't see it with your naked eye, it should be visible in a pair of regular binoculars.

$\dagger$Stars too close to the ecliptic are only available for a more limited time, so a star that is close to the poles is preferred.

This hot off the press, from Bill Ochs, Webb project manager:

This is just the first step; HD 84406 will be too bright to study with Webb once the telescope starts to come into focus.

Not the answer you're looking for? Browse other questions tagged star observational-astronomy james-webb-space-telescope .

34
Why does the alignment evaluation image from JWST look like this?
2
What exactly is the risk to any JWST instrumentation when looking at objects that are "too bright"?

8
Will JWST be as durable as the hubble telescope?
3
Why the chosen orientation for the M87 black hole image?
4
How will microshutter arrays be used in the James Webb and future space telescopes?
4
How does NASA's ASTHROS stratospheric telescope compare to its James Webb space telescope?
2
Were K2-141b and WASP-63b selected as the first two exoplanet atmospheres for JWST to look at during its first year of observations? If so, why?
2
Are the dispersion directions of the prism and the grating in Hubble WFC3 UVIS G280 perpendicular? Can we call this a "grism"? With cross-disparsion?
1
If Betelgeuse dimmed because of dust, what became of the dust?
4
How clear will the images taken by the JWST be, compared to the rest of the telescopes?
1
What is the maximum magnitude that the JWST can safely observe?
34
Why does the alignment evaluation image from JWST look like this?