How are radio telescopes pointed?

In the past, I worked as a programmer in a radio astronomy station, and since then I have a question on my mind.

Well, even most optical telescopes aren't steered by hand and guided by human eyes - aside from a small fraction of objects, most sources are too dim to be seen by the naked eye or even with assistance, and observations require precision far beyond the ability of humans. A hobbyist telescope where less precision is needed and most sources are relatively bright could be adjusted by hand; a telescope being used for research couldn't - or certainly shouldn't.

Radio telescopes use a procedure also utilized by telescopes at other wavelengths: observing scripts and scheduling blocks. These contain information about the observing parameters - such as the telescope configuration, receivers and backends used, and the sources themselves - and commands that tell the telescope to slew to a point in the sky, take data, track the source, etc. Here's an extremely simple demo scheduling block for use on the Green Bank Telescope (see Section 6 of Observing with the Green Bank Telescope for additional details on it):

This block can use Python commands within it, allowing it to, for instance, loop through a list of sources. Notice that it loads in a source from a catalog (the Catalog() command) and automatically slews to the source (Slew()) without any human intervening; you just submit the block and let it run. The catalog contains all the information needed for the telescope to find a source, including its right ascension and declination.

Pointing and focus errors can creep in and do require additional calibrations, particularly for high-frequency continuum observations. This can be somewhat achieved by applying a pointing model (e.g, White et al. 2021) taking into account the telescope's structure, current positioning, thermal deformations, etc. However, for even better pointing correction, calibration sources should be used, which may be chosen from a specific catalog of pointing sources. Again using the GBT as an example, this can be achieved by running AutoPeakFocus() in a scheduling block to perform pointing and focus scans prior to gathering the actual data, or simpler variants to just do one of the two. This will then automatically update the corresponding corrections. Again, this is significantly more important in certain regimes and certain targets.

It is possible for the telescope operator - the observatory staff member on site in the control room coordinating and aiding observations - to interrupt scripts and make unscheduled changes. This is typically in the event of high winds (the GBT, for example, must be stowed if winds exceed 35-40 mph) or if snow or ice has built up on the dish, in which case observations must be paused for the snow to be dumped. That said, this isn't really done by the operator looking at the telescope (two kilometers away from the control room), but by computers that can calculate and move the telescope to the precise position necessary to keep it safe.

There are several ways to point a radio telescope. 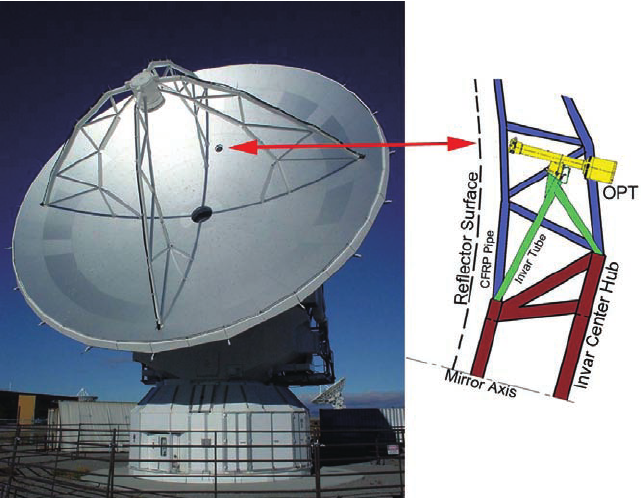 If an amateur astronomer can see and identify a specific star in the sky with their naked eye, they can point their telescope at that star. Many telescopes come with smaller spotting scopes attached which have a wider view of the sky. If the target star can be seen and identified through the spotting scope the main telesceope will be pointed at that target star.

But there is one big flaw with spotting a star and aiming your telescope at it.

Actually there are only about 6,000 to 9,000 stars that can be seen with the naked eye from Earth, and "billions and billions", not to be overly precise, of other stars which can be detected in telescopes, to say nothing of other astronomical objects invisible to the naked eye but visible in telescopes.

And when someone discovers a new object, or something new about a known object, they publish the coordinates of that object so others can observe it.

An amateur or professional astronomer who wants to look at a specific star and can't recognize that specific star when they look at teh sky, can look up the coordinates of the object, and have a computer program calculate where to point their telescope to that star for their location on Earth and the time and date. And then the program will instruct the motors on the telescope to turn to point at the star, and to keep turning to keep that star centered until told to stop.

All professional telescopes and all the fancier amateur telescopes have motors to turn the telescopes which can be programmed where to point them.

And of course the same goes for steerable radio telescopes. Their motors can be instructed to point them at any location in the sky that is to be studied.

1
How do ASKAP's focal plane phased array feeds interact with the entire array phasing?
2
"Mysterious radio signals" - how could a geostationary satellite and Ross-128 line up with Arecibo?
7
How large does refraction become in radioastronomy?
10
How can I hear (or at least detect) a pulsar at home?
13
How do radio astronomers avoid having their receivers burned out by ground-imaging radar from satellites?
8
Highest frequency that's been imaged by a radio telescope?
1
In the 1950's how were radio-astrometric positions with portable dishes so precise they could be assigned to their dim optical counterparts (Quasars)?
3
Open source library to calculate image from signals of a distributed set of radio dishes?
1
What is notable about LOFAR's sub-arcsecond radio resolution of distant galaxies? Does lower freq. range enable new capabilities that mm wave can't?