How is the star 'Spica' pronounced?

Pronunciation seems to vary depending on the source, usually either SPY-kuh or SPEE-kuh. Which is correct?

There is no general accepted pronunciation. Spica is a Latin word and there is no globally uniform pronunciation for Latin. How you pronounce Latin depends on your mother tongue as Latin most often is pronounced as if it were pronounced in the most familiar way to the language you speak. Yet, Wiktionary gives the pronunciation as /ˈspiː.ka/ or [ˈs̠piːkä], thus spee-kuh.

Many foreign words are pronounced in English as if they were English words (which is fine, of course - especially for a word like Spica which has been in the English language for centuries, found even in its original Latin meaning), so in the English-speaking world you might most often find it pronounced as Spy-kuh [ˈspaɪkə].

It might depend on global locality or language being used. As a native English speaker I pronounce it as SPY-kuh. Then again, with the current omicron variant of Covid 19, most non British speakers of English pronounce it as OM-ikron, whereas many British speakers of English pronounce it as Ohm-ikron. The British and Americans can't agree on a common pronunciation of tomato, leisure or oregano. They even have different words for capsicum/bell pepper, zucchini/courgette, freeway/motor way, pavement/sidewalk (elsewhere foot path), diabase/dolerite.

Then there's the tricky issue amongst English speakers of how to pronounce Uranus and how the word is divided into syllables. American pronunciation is usually Uran-us, elsewhere it can be pronounced You-ranus - something very close to a part of the anatomy, which is unfortunate.

Pronunciation seems to vary depending on the source, usually either SPY-kuh or SPEE-kuh. Which is correct?

The Oxford English Dictionary or "OED" calls itself:

The definitive record of the English language

The page has little audio players, one for each. They both sound pretty much "SPY-kuh". "Spy" like with "my little eye" (I'll call it a long "I" vowel) and kuh like in "cusp". 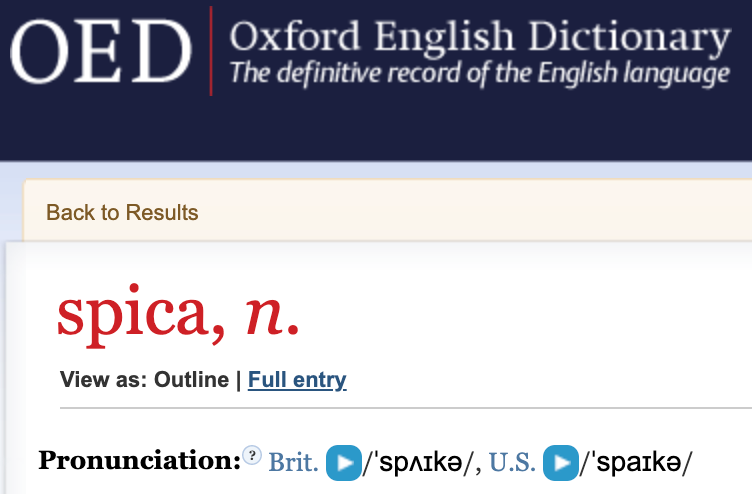 1
What's known about Odd Radio Circle appearance? What would they look like if we could see them? Are they transparent/translucent in radio, or opaque?

3
Can we know the orbital planes of extraterrestrial planetary bodies?
5
How can a gas planet become tidally locked with a star?
4
Why nobody cares to give the nearest stars better names?
16
Is parallax a "technique to measure the star distances" or a "tiny shift in star's position"?
1
How is the distance of a star from Earth calculated in the HYG star database
0
Is there a website out there where I can find/compare data on stellar parameters for the brightest stars?
1
Eta Cassiopeiae star type; G0V? F9V? Both?
4
How can I validate star names and designations?
2
How do I intelligently revise the Yale Bright Star Catalog?