Moon orbits crossing each other

Some planets, such as Mars, have 2 or more moons. Giants, like Jupiter of Saturn have a lot of moons!

How likely the orbit of one crosses another one's orbit? Is it possible for two moons to collide? If yes, what would exactly happen?

There is one known pair of moons in the solar system that seemingly swap orbits every couple of years. That's Saturn's Epimetheus and Janus. Their orbits are so close together that they interact gravitationally every couple of years (when the inner moon catches up to the outer moon), so that the outer moon is slowed down, and the inner moon is accelerated.

Each moon changed direction from prograde to retrograde and vice-versa in two co-orbital horseshoe orbits, never crossing paths as they exchange a bit of momentum when closer but Saturn's gravitational pull prevails and pulls each of these two moons back in the opposite direction where they came from, swapping from lower to higher orbit. It's a bit tricky to explain in words: 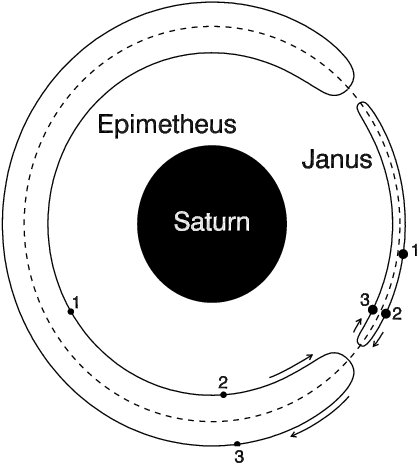 Though it's probably very unlikely in a solar system as old as ours (~5 billion years), I would not put it out of the realm of possibilities. Most of the collisions of this scale and magnitude have already happened - the early days of the formation of the solar system was violent and full of collisions between protoplanets.

In fact, one hypothesis for the formation of the moon was that it formed from the debris of just such a collision.

Additionally, the axial tilt of Uranus could also be explained by the collision of the planet with a protoplanet billions of years ago.

Is the likelihood zero? No. But I would bet money that collisions between planets and asteroids/comets are much more probable.

Not the answer you're looking for? Browse other questions tagged planet orbit natural-satellites or ask your own question.

1
Is there some upper limit in the moon size distribution?
7
How is it that all planets (and moons) in our solar system are in equilibrium orbits?
1
How to watch at best this week's planet alignement?
10
Why don't we have in-between planets?
2
How did "oddball" Valetudo, Jupiter's new prograde moon, end up in a wider orbit?
24
Why do planets and satellites in the Solar system look so wildly different if they came from more or less the same matter?
2
Various moon orbits
6
Has any moon achieved "retrograde equatorial orbit"?