How did Hubble know the red shift difference between "moving away" and "old"?

My 9yo daughter is very into space at the moment and asked a question that my physics knowledge (6th form college, 20 years ago) is way too poor to answer.

Her space book tells us that as stars age, they get redder. On the next page, it tells us that Hubble knew the Universe was expanding because distant galaxies were red, and thus moving away.

She (and I!) would like to know (in layperson's language please 😊), how did Hubble know they were moving away and not just old?

The "redshift" measurements that Hubble used to determine his law are based on looking at the spectrum of distant galaxies. That is, splitting the light coming from the object in its constituent colors (e.g. by passing it through a prism). If you look at such a spectrum, you will notice that certain lines (colors) are missing. These are so-called absorption lines, and correspond to the physical properties of specific atoms in the object. The location of these lines are determined by physics and are universal; they are the same for all objects.

However, if you look at the spectrum of a distant object you find that all these lines are shifted a little bit towards the red. By comparing to the absorption lines of gases on Earth, we can establish how far the lines are shifted, the so-called "redshift".

This is very different to the reddening of older stars. As the stars grow older they cool down, which means that the light they emit has more red light (compare to a fire burning bright yellow when it's hot and a darker red when cooling down). This shift affects the overall distribution of the emitted light, but importantly does not affect the absorption lines, which stay in the same place (color).

To show this, here's two spectra from BBC revision notes for exams taken at age 16.

Spectrum from the Sun:

Spectrum from a distant galaxy:

You can see the lines in the latter have shifted towards the red end.

Disclaimer: I am not an astronomer or physicist. I welcome any corrections or clarifications.

The light from stars and galaxies has a color. For stars that are close enough and bright enough, you can see their color with your eyes just by looking up on a clear night1. Galaxies are dim enough that they just appear grey to our eyes, even when looking through a telescope. But if you use a camera and set the exposure long enough, the camera will capture the color of the galaxies, too.

Light is a wave2 and is subject to the Doppler effect just like sound is. Think of the sound of a car zooming past you. The pitch of its engine starts high, and then drops low. It start high because the sound waves are being compressed as the car moves toward you. As it zooms past, you hear it shift lower. The car is now driving away from you, so the sound waves are being stretched out.

This is what redshift and blueshift are.

Star color vs. redshift: How to tell them apart

How can we tell if the color of a star is from the star itself, or has just been redshifted because it is moving away from us?

To answer this question, we need to take a bit of a side quest and talk about spectral lines.

How do we know what stars are made of?

We know stars are made primarily of hydrogen and helium, plus smaller amounts of other elements. But how do we know this?

It turns out that when you heat up atoms, they glow3. Each element--each unique kind of atom--glows in a specific color of light. If you heat up sodium or any other element to a temperature sufficient to make it glow, and then pass that light through a prism, the spectrum that comes out is NOT a full rainbow. Instead, it is only slices of the rainbow so thin they look like lines, which we call spectral lines. Importantly, each element produces a unique set of lines distinct from all other elements. The same element always produces the same lines. They look like this: 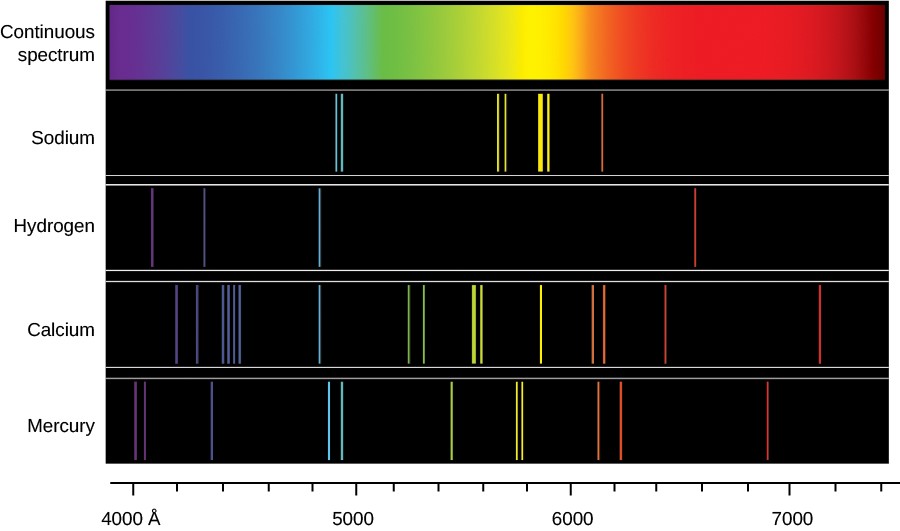 Let's recap what we know so far.

So now we have all the tools to find out what stars are made of! Simply pass the light from a star through a spectrometer, and use the resulting spectrum to see which elements are present based on the spectral lines produced5.

Tying it all together

Now we know enough to understand how astronomers can tell the difference between the color of a star or galaxy and its redshift.

1 At first glance the stars all seem white, but as you look a little closer, you'll notice they're lightly red, blue, yellow, orange, and white. Once you see it, it's hard to unsee!

2 Light is also a particle. Light is weird and fantastically complicated.

3 It's even cooler than that, actually. Everything glows, all the time! It's called thermal radiation. The "color" or wavelength of light the thing emits depends on its temperature. Even people glow! This is how night vision cameras work. They can see the infrared light you give off. The only way to not glow is to have a temperature of −273.15 °C, which is 0 K, known as absolute zero.

6 In fact we rarely need to do this. Having the composition tells us considerably more about the star than its color alone would. But in principle, we have enough information to know its true color, too.

On a small scale, some stars are red-shifted and some are blue-shifted. As we look out over larger scales, however, there's a general trend as stars get further and further away from us for more and more to be red-shifted, and in higher amounts. This is consistent with an expansion of the universe, but is difficult to explain in terms of temperature; why would stars further away from us be colder? The expansion of the universe is isotropic, which means that it looks the same from every point; we see another galaxy moving away from us and redshifted, but that galaxy sees us moving away from them and measure us as being redshifted. A temperature gradient would be anisotropic; every observer in the universe would agree that Earth is in some special high temperature zone.

Other galaxies being lower temperatures also just wouldn't match what we know about astronomy. Different astronomical bodies tend to be in different temperature ranges. If stars far away from us were colder, they would be outside the normal ranges of star temperature ranges. Moreover, astronomical bodies don't emit light in just one frequency, they emit an entire spectrum. These spectra show particular patterns, such as lower amplitude at particular frequencies. The term "red-shifted" refers to how this entire spectrum is shifted: it has the same pattern, just at different places. Suppose you hear two musicians, and you hear one note from each musician. If those notes sound different, you won't be able to tell whether that's because they played different notes, or are moving at different speeds. But if they both play an entire song, it will be easy to tell whether or not it's the same song. A star moving away from us explains why it has the same "song", but at a different "pitch". A star being at a different temperature doesn't explain it.

Not the answer you're looking for? Browse other questions tagged star galaxy redshift age .

4
Can Hubble red shift be interpreted as time dilation?
4
Why is there no time in the distance equation using Hubble constant, red shift and speed of light?
2
Black hole darkness a result of gravity or temporal distortion?
2
Are blue and red shift visible?
5
Could a contracting Universe create the redshift effect observed by Hubble?
9
Cosmological redshift vs doppler redshift
4
Is the age of the Universe really 13.8 billion years?
9
Can you tell me which star this is?