How did astronomers "measure a large (>40 degrees) misalignment between the black hole spin and the orbital spin" of MAXI J1820+70?

A team of astronomers recently observed an askew black hole just 10,000 light-years from Earth. The black hole’s spin axis is out of alignment with the plane of debris orbiting it by at least 40 degrees, the most extreme misalignment of its kind yet seen by astronomers.

The system is called MAXI J1820+70, and it contains a small black hole (about eight times more massive than the Sun) and a star that’s about half the size of the Sun. Astrophysicists recently calculated that the black hole, an incredibly dense object with a gravitational field so intense that not even light can escape, is spinning at an awkward angle compared to stuff orbiting it; the researchers think its tilt may be a relic of how the object was born, in the violent death of a star.

“The main result is that, for the first time, we measure a large (>40 degrees) misalignment between the black hole spin and the orbital spin,” said Juri Poutanen, an astrophysicist at the University of Turku in Finland and the paper’s lead author, in an email to Gizmodo. “In this case, the likely formation channel is a large kick (due to asymmetric neutrino emission) to the black hole during the collapse of the core of a massive star.”

Question: How did astronomers "measure a large (>40 degrees) misalignment between the black hole spin and the orbital spin" of MAXI J1820+70?

How direct/indirect is this "measurement" of >40 degrees? Is it something that can be visualized in an image somehow? 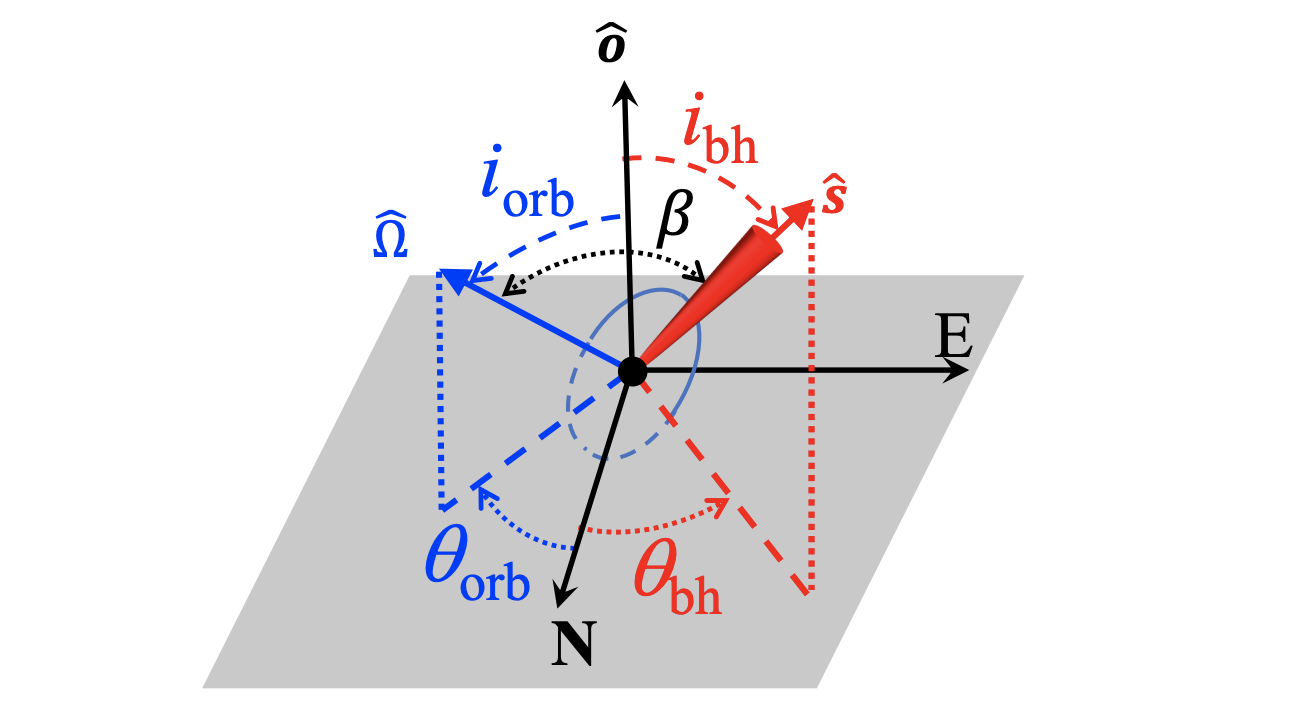 Before this paper, other works had made measurements of $i_{jet}$ and $\theta_{jet}$. Simply put, the inclination of the jet affects how blobs of jet gas move across the sky (proper motion) and the position angle of the jet can be seen in images. Simulations show a "magneto-spin alignment" (Mckinney et al 2013) effect which align the jet direction with the black hole spin (shown in red above).

The orbital inclination $i_{orb}$ "has been constrained ... by the lack of x-ray eclipses and the detection of grazing optical eclipses." In simpler terms, a $i_{orb}$ too close to 90 degrees would produce x-ray eclipses since we'd be seeing the orbit close to edge-on. On the other hand, there were some observations where it appeared that the donor star just barely passed in front of the accretion disk (grazing optical eclipses) so the orbital inclination has to be large but not too close to 90, resulting in a range of possibilities between 66-81 degrees. You can see more details here.

Each of the 4 angles are derived by making (usually justifiable) assumptions but nonetheless a layperson would probably say these are indirect measurements that cannot be really "seen." The most obvious angle is $\theta_{jet}$ since you can see which direction the jet is pointed on the sky (just as you might see which direction Orion's bow points on the sky), but $\theta_{jet}$ is just a tool to estimate $\theta_{bh}$.

"Directness" is a very relative thing especially in astronomy. I think this measurement of misalignment is very interesting because each of the 4 angles required a different approach to estimate, and then they must all be statistically combined in the end to provide an estimate of misalignment.

Not the answer you're looking for? Browse other questions tagged observational-astronomy black-hole data-analysis accretion-discs modeling .

26
What are the differences between a Black Hole and a Supermassive Black Hole
1
How does a black hole spin?
9
Can matter fly directly into a black hole and avoid the accretion disc?
0
How Did Early Astronomers Measure Distances?
19
Why can't supermassive black holes merge? (or can they?)
42
How do we know that black holes are spinning?
4
What is a black hole's "shadow" and the best angle to view it to measure the spin?
0
Can the interferometer called "Gravity" measure "a few centimeters on the Moon"?