From an outside observer, if matter falls into a black holes from only one side, would the black hole's growth be asymmetric, and would it's gravity be non-isotropic?

Any asymmetry would disappear extremely rapidly, damped by the emission of gravitational waves. This is demonstrated by the briefness of the ring-down phase after a binary black hole merger - which is about as extreme an asymmetric accretion event as you could imagine. The outcome of the merger is an axisymmetric, but not spherically symmetric, Kerr black hole.

There are two classes of black hole asymmetries I will consider in this answer. The first the is Kerr black hole which is the class of black holes with non-zero angular momentum and no net charge. These black holes have a non-spherical event horizon, and therefore do not have spherical symmetric, but they do have rotational symmetry about their axis. This is a steady-state configuration and will persist unless perturbed. 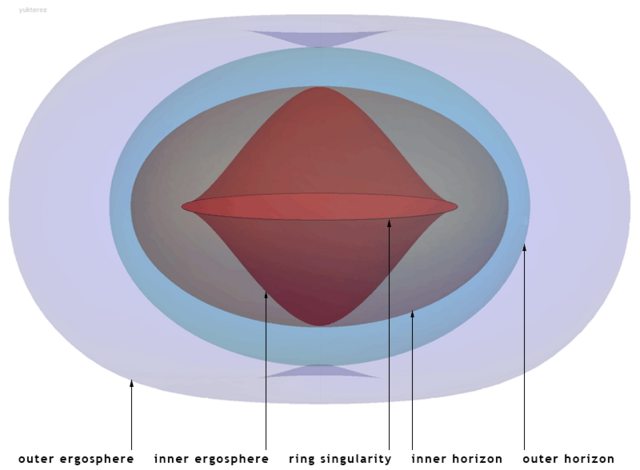 The second case considered is a non-steady state such as might be found during the merger of two black holes or another compact object such as a neutron star. These effects will also occur when any matter enters the black holes, as it will be non-steady-state, but the magnitude of the effects will be smaller.

Prior to the Merger
Prior to merging, black holes can be deformed by tidal effects. This does not seem to be a general effect, but only impacts black holes that were not spherical to begin with.

Through new theoretical analysis, Le Tiec and Casals predict that tidal bulges can indeed occur during mergers. For a black hole spinning at 10% of its maximum possible rate in an asymmetric tidal field, their calculations show that tidal bulges can appear, with a corresponding quadrupolar TLN of 0.002. In comparison, the quadrupolar tidal Love numbers (TLN) for a much more deformable Earth is 0.3, while a neutron star has a number of about 0.1. (Spinning black holes can be deformed by tidal forces, calculations reveal)

During the Merger
During a black hole merger the shape of the event horizon can be come quite complex.

As two black holes approach each other, a 'duckbill' shape protrudes from each of the two event horizons towards the other one. This protrusion extends longer and narrower until it meets the protrusion from the other black hole. At this point in time the event horizon has a very narrow X-shape at the meeting point. The protrusions are drawn out into a thin thread. The meeting point expands to a roughly cylindrical connection called a bridge. (Wikipedia) 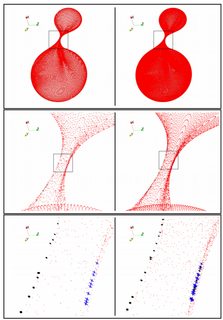 Image from On Toroidal Horizons in Binary Black Hole Inspirals

See also Are black holes spherical during merger? (as mentioned by uhoh in the comments)

After the Merger
Post merge, the event horizon transitions from a complex state to the steady state Kerr configuration by exiting gravitational waves.

The merger of a binary black hole gives birth to a highly distorted final black hole. The gravitational radiation emitted as this black hole relaxes presents us with the unique opportunity to probe extreme gravity and its connection with the dynamics of the black hole horizon.... Once the BHs merge, a highly distorted BH settles into a Kerr BH radiating exponentially decaying ringdown emission. (Post-merger chirps from binary black holes as probes of the final black-hole horizon)

See also What causes a black hole ringdown and why can it prove the no-hair theorem?

The only black hole with an isotropic gravitational field around it is the Schwarzschild black hole, but astrophysical black holes have spin angular momentum and thus are instead better modeled by the Kerr black hole. The Kerr black hole spacetime is axisymmetric, i.e., cylindrically symmetric, about its spin axis. The region that surrounds a Kerr black hole is known as the ergosphere, which is poorly named because it's not spherical for arbitrary spin, and instead is like an oblate spheroid for modest spin and more like a pumpkin for high spin. Essentially, the ergosphere is "a region of spacetime around the black hole dragged by its rotation faster than the speed of light, meaning that from the point of an outside observer any matter inside is forced to move in the direction of the rotation of the black hole." A Kerr black hole has several important surfaces, compared to the simpler Schw case. The ergosphere is bound between the outer event horizon and the outer surface of infinite redshift.

From an outside observer, if matter falls into a black holes from only one side, would the black hole's growth be asymmetric, and would it's gravity be non-isotropic?

You seem to be asking about the effect of accretion. In principle, an accretion disk forms around the black hole, so that it accretes matter from the inner-most stable-circular orbit which is beyond the event horizon.

I am not sure what you mean by "would the black hole's growth be asymmetric?" Are you asking about the change to its shadow perhaps? In the case of the supermassive black hole at the center of galaxy M87 that was imaged by the Event Horizon Telescope, the shadow deviates from circularity within 10%, consistent with prediction of General Relativity for Kerr black holes. The asymmetry in the accretion disk is essentially due to relativistic beaming. The shadow of a Schw black hole is circular. This implies that an initially non-rotating black hole that begins accreting will start with a circular shadow but will begin to appear as non-circular, as its spin increases, to far away observers. If you're wondering about the ergosphere, as a Kerr black hole accretes, its spin increases, which makes the ergosphere more pumpkin shaped as the outer surface of infinite redshift widens at the equator but is squished at the poles. This wonderful animation from the wiki page for Kerr black holes shows how the ergosphere depends on the black hole's spin, and how the non-circularity of the black hole's shadow increases with spin.

Some hydrodynamical models consider asymmetric Bondi-Hoyle accretion onto a Schw black hole, but as far as I can tell, it is often assumed that the gas is treated as a test fluid and does not effect the spacetime geometry, implying that the gravitational field around the black hole remains isotropic, for example here. In principle, accretion should increase the spin of an initially non-rotating black hole, and thus would remove the isotropy of its surrounding gravitational field, resulting in the Kerr geometry. In models that consider asymmetric accretion onto a Kerr black hole, things are even more complicated. But in principle, the axisymmetry of the Kerr spacetime is preserved as the spin and mass increase due to accretion. This is an area of research for magnetohydrodynamical numerical studies of accretion in the Kerr spacetime.

41
Why are there uneven bright areas in this photo of black hole?
34
Are black holes spherical during merger?
2
What can be learned from, or noted in this LIGO Orrery video?