How is this picture of the moon possible?

I need help understanding this images I personally took. If the phases of the moon are determined by the position of the earth, moon & sun. Then how is the moon a crescent while it is rising in the east with the sun & still a crescent while setting with the sun? What is the obstruction creating the crescent considering the moon is between the earth & sun?

What is the obstruction creating the crescent considering the moon is between the earth & sun?

The moon. The part of the moon that's dark is in the shadow of the rest of the moon. Because the crescent moon is nearly between the earth and sun, the side that's lit (the side that's nearer the sun) is mostly facing away from us.

The Moon doesn't really rise and set exactly "with the sun", it is usually somewhat north or south of it, because its orbit is somewhat tilted with respect to Earth's orbit.

In this picture the bright side of the Moon points very close to where the Sun is. As discussed below, this doesn't work as well when the Moon is fuller, but for the purposes of understanding a crescent Moon it helps us understand what's going on.

This is a flat picture so we can't see depth, but the arrow point strongly into the page because the Sun is much further away the than the Moon.

The following paper The Moon Tilt Illusion by Andrea K. Myers-Beaghton and Alan L. Myers takes us through perspective projection to show that when the Moon is much further away from the Sun this doesn't work as well, but for the purposes of this answer about a thin crescent Moon it's perfectly fine to assume the Sun is in the direction where the bright side of the Moon suggests it is. 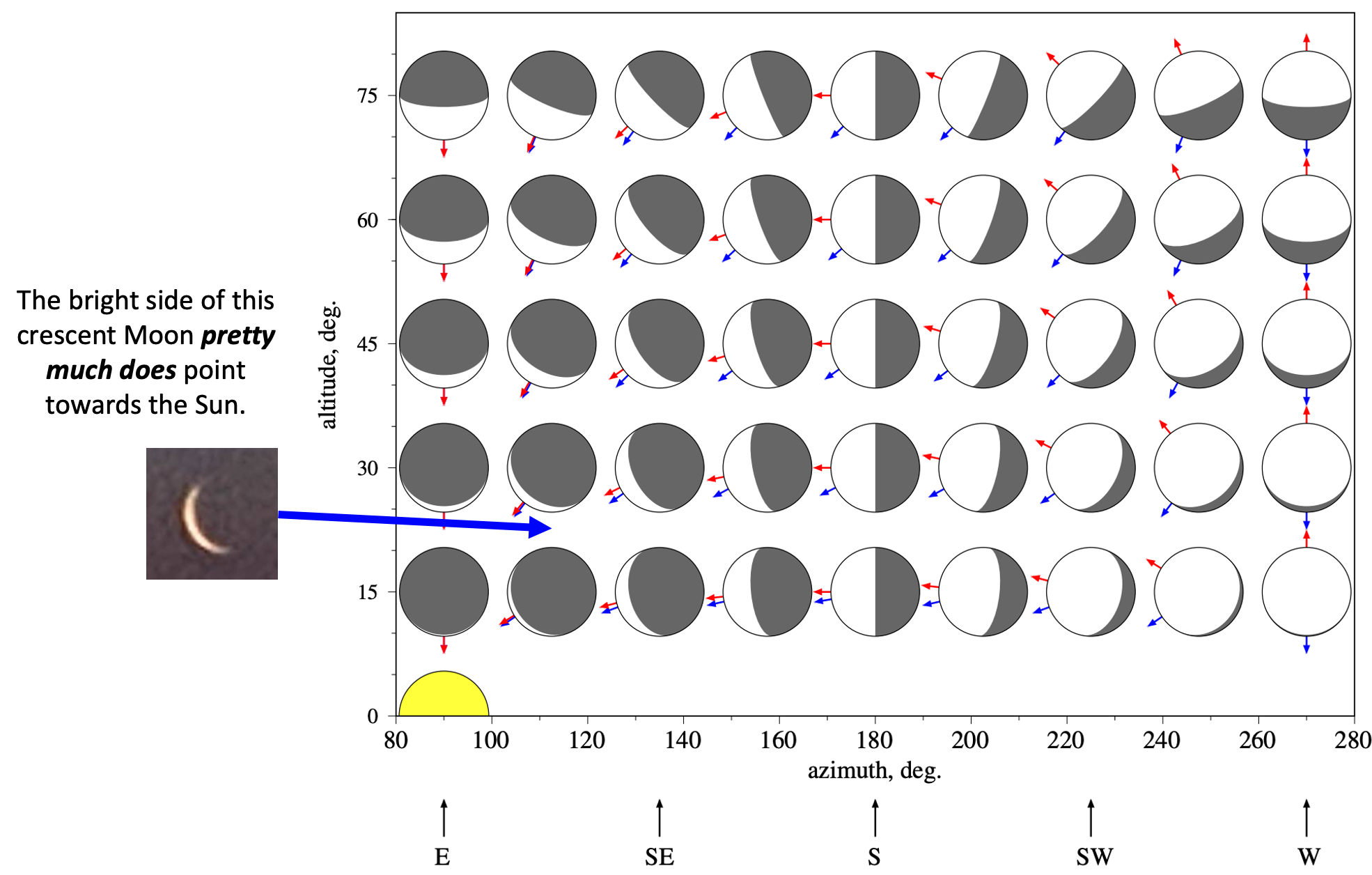 It's not a shadow. The only time the moon is shadowed is when it's full and there's a lunar eclipse. What you saw was the moon when most of the side we see was facing away from the sun. At the time of a full moon all of the side we see is facing the sun.

As you said in your question, the phases of the moon are determined by the positions of the Sun, Moon and Earth in space (it is easy to test out the principle at home using a light bulb and a ball and changing their relative positions to yourself). The dark parts are just those parts of the Moon that are on the backside as seen from the Sun. And these thin crescents appear when the Earth, Moon and Sun are close to being in one line (in that order) i.e. at a time close to New Moon. But you will never see the crescent both at sunrise and sunset on the same day. You will either see it a couple of days before New Moon shortly before sunrise or a couple of days after New Moon shortly after sunset (it is in this order as the Moon appears to move slightly slower in the sky than the Sun (the orbital motion of the Moon is opposite to the Earth's rotation)) .

Based on these insights, one can conclude that, if your picture was taken in the northern hemisphere, it must actually have been taken at sunrise (not sunset as it claims). This is because because the Sun and Moon are both moving from East to West, which means in the northern hemisphere from left to right. So if your photo would be a sunset photo, the crescent would be moving from the top left to the bottom right. The Sun would have already done that and would be ahead of the crescent below the horizon. So the illuminated side of the crescent should broadly point to the right. But it is in fact broadly pointing to the left, which means the crescent was rising from the bottom left to the top right, with the Sun about to rise behind it.

This is also confirmed by the figures in the scientific publication mentioned in some of the comments here. The possible phases at sunset are not consistent with the photo at all 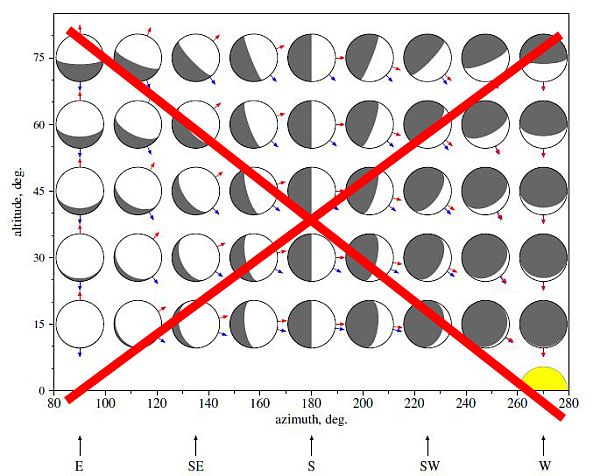 whilst the possible sunrise phases contain instances that are consistent with the photo; 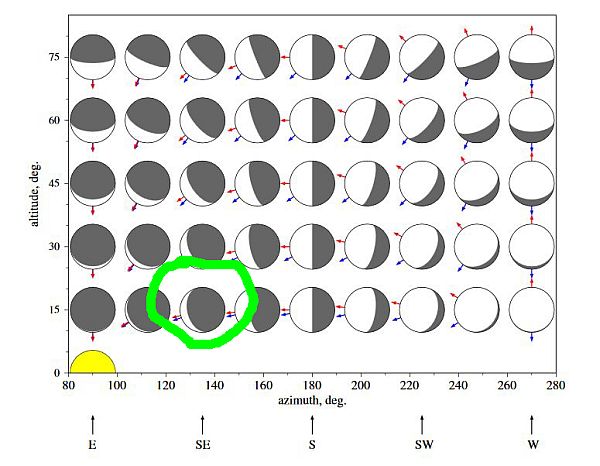 If the photo was indeed taken at sunset, it must either have been taken in the southern hemisphere (where everything would be reversed) or flipped horizontally.

Here are the sunset/moonset and sunrise/moonrise views visible from Albuquerque, New Mexico around New Moon on 1 Feb. 2022 (courtesy of Sky and Telescope Skychart ) 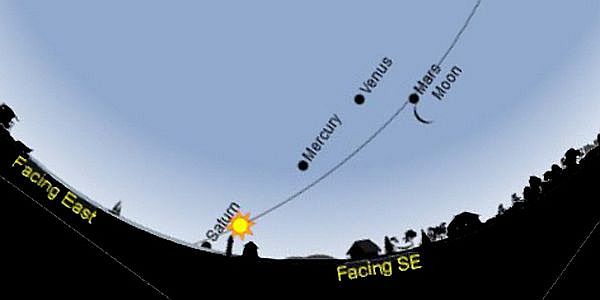 And below again the photo taken by the OP (obviously showing the scenario slightly later/earlier than the charts, with the Sun below the horizon) 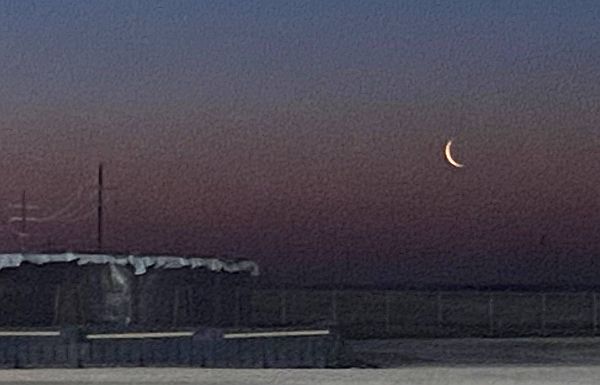 So if the photo indeed taken at around the last New Moon (which is not confirmed by the OP as yet) it could only have been taken at sunrise not sunset. The chart shows a few planets near the Moon on this occasion as well, but they may have been too close to the horizon to show on the photo given the probably shortish exposure time. If that would be a sunset photo, the illuminated side of the crescent would not only point opposite to the sun (which is impossible, and which I have never seen in 50+ years observing the sky) but it should have been considerably higher in the sky as well)

What you need to consider is, that the fastest moving object in this story is you moving from west to east in half a day, while standing on a spinning planet. Compared to you, the sun, the moon and the earth hardly move, so why would it look much different?

To address your question:

The Set up: We're walking single file into the low setting sun and I am directly in front of you. You are following behind me looking right at the back of my head and the low setting sun is likely blocked from your view by my head. So you, me, then the sun all in alignment. (Our shadows would align stretching behind us)

You would see zero directly-lit, sun-reflecting parts of my face. (My head is the "moon" here)

The Change: Then you quicken your pace and are behind me still but just off to the side a bit (as if to catch up to walk along side say. We're not aligned anymore) The sun would be in your view now, as you've sidestepped a little, and almost immediately, once you move out from behind me, you would catch a sliver of my face and it reflecting the sunlight. That sliver of reflecting face would grow as you caught up to me.

The Conclusion: So when there is a crescent moon that means the earth (you) and the moon (me) and the sun (the sun) are very closely in alignment to get only a sliver of the moon to be lit up and in your view. When there is a crescent moon and you are pointing at it in the sky you would then need to move your finger only a little bit to redirect and point at the sun. They always appear near each other in the view of the sky.

As to the direction of your crescent photo some were discussing (not sure they'll get to see this but): Oddly enough there are times when the moon sets north of where the sun sets. So the sun would be on its left as we face it by the time the moon is all the way down. This might be why the lit part was on the bottom left. So I am not agreeing about the northern hemisphere crescent moon "always" being lit on the bottom right as one suggested (I mean, I believe you anyway) But for most crescent nights I believe it will be bottom right. Just a rare few that aren't (and only at the horizon).

Its arc in the sky changes over the course of a few days even. As you know the sun's arc crossing the sky is higher in the sky in summer and lower (more southern) in winter. (Think tilted hulahoop) This similar arc change for the moon happens much faster. I remember seeing the moon rise one night on the south side of a local mountain from my view. The very next night it rose on the north side of the mountain. So I knew it was setting similarly. I never really put together how much it moved like that before. (Helpful website down below)

I can't quite pinpoint the date of your photo but I'll leap at Feb 3rd 2022? This was one of those times where the moon set after the sun, and was north of where the sun went down (in NM). You can see this effect on mooncalc .org -That's a link so in good practice google search it- You can change the date to around Feb 7th and see its arc set really north vs Feb 28th. Click and move the dot along the top timeline too. A similar site is called suncalc .net just for the sun instead. Also helpful is time and date .com

I'm more photographer but night photoing got me to dabble in astronomy too, timing for moonless nights.

9
The moon in the first phase visible in the sky is tilted
9
How does the Moon move in the "night" sky as seen from the poles?
2
Lunar terminator illusion

14
How does moonrise/moonset azimuth vary with time?
5
Connection between Earth, Moon, Theia, and asteroid belt?
4
How Soon Could a Waxing Crescent Moon Be Seen?
1
calculating lunar phases
12
How does the Moon look like from different latitudes of the Earth?
4
Where is the sun relative to my lunar rover?
4
Would people on opposite sides of the earth see different details of the moon, if so are there actual photos demonstrating this?