Why does the alignment evaluation image from JWST look like this? 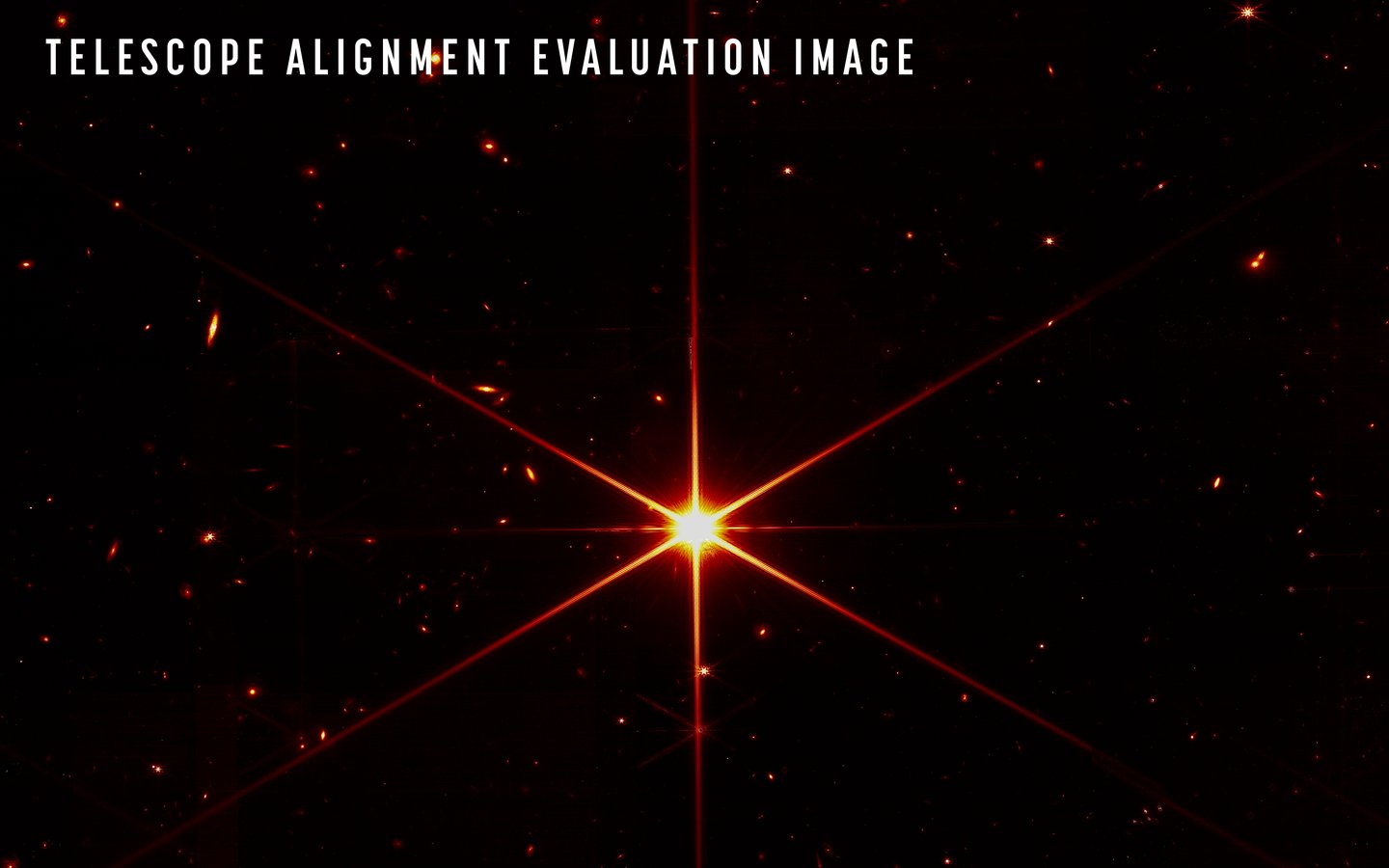 To my untrained eye, the star looks like it would look when viewed from a mirror that has a small smudge at the center. There are multiple lines at 45 degree originating from the star (and also couple of fainter ones at left-center and bottom-center of image).

Is this because of the brightness of the star (it is "only" 258 about 2000 light years away)? Or are there some image post-processing steps that have not been applied to the image? Would the star look the same, if, for example, Hubble Space Telescope photographed it?

A quick check by pasting the image into PowerPoint and rotating a line shows that the spikes have threefold symmetry; they're at -30°, 30° and 90°.

This is exactly what you would see from diffraction by the "spider web" of the dark edges that separate the 18 hexagonal subunits of the primary.

But it's also exactly what you would see from a single giant hexagonal aperture.

The devil is in the details, since the pattern will change depending on how wide of a range of wavelengths is being passed, which will tend to smear out some aspects of the power spectrum.

The secondary mirror is supported by a spider with elements at 60°, 90 and 120°. The three diffraction spikes they will produce will be perpendicular to them, but also spaced every 30° degrees rather than every 60°.

I took the Fourier transform of the monochrome image illustrating JWST's clear aperture from @pela's answer and we can instantly see similarities.

The horizontal spike at 0° is the diffraction pattern of the vertical element of the spike, and the light/dark banding in it (characteristic of slit diffraction) is nicely reproduced.

The other two that should appear at at +/- 30° are hidden under the sixfold star pattern of the mirror's "hexagonal theme".

How much of the six-pointed star's power is from the "spider web" of the internal gaps between elements versus the mirror's external jagged edge versus just a big giant hexagonal hole? It's difficult to say without a more careful analysis with a full model.

and here's the script:

Any telescope will have diffraction of the light due to the edges between mirror and non-mirror. This sets a fundamental limit to the telescope's resolution, given by the size of its primary mirror. Earth-based telescopes will usually not have this problem, since the atmospheric seeing will dominate, but James Webb is in space, and so is "diffraction-limited".

The diffraction pattern depends on the shape of the mirror, as well as on anything that is in front of the mirror, i.e. the secondary mirror and the arms holding it (called "struts" or "spider"). In general, an edge will result in spikes perpendicular to that edge. A round mirror, such as Hubble's, results in concentric rings, but its secondary mirror is mounted on a plus-shaped spider, and hence point sources observed with Hubble will have plus-shaped spikes, as seen below: 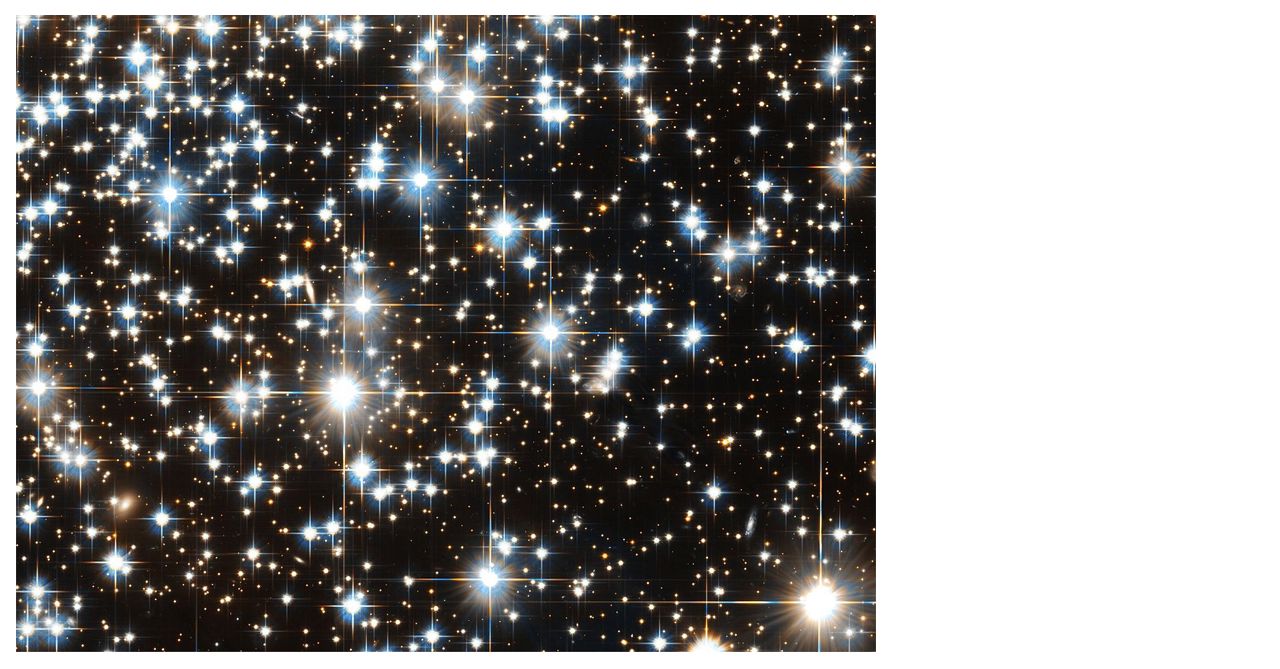 James Webb's mirror is made up of 18 hexagonal segments. The edges of the outermost mirrors hence all follow three different directions, which are aligned at 60° to each other. This is the reason for the six brightest spikes.

Additionally, Webb's secondary mirror is mounted on three arms. The two lower arms are actually aligned with the hexagonal pattern (on purpose, I presume), so the diffraction caused by those fall on top of four of the six spikes. But the upper boom is vertical in the images, and thus gives the fainter, horizontal spikes.

You can see the alignment here on this "selfie" (created using a specialized pupil imaging lens inside of the NIRCam instrument that was designed to take images of the primary mirror segments instead of images of space): 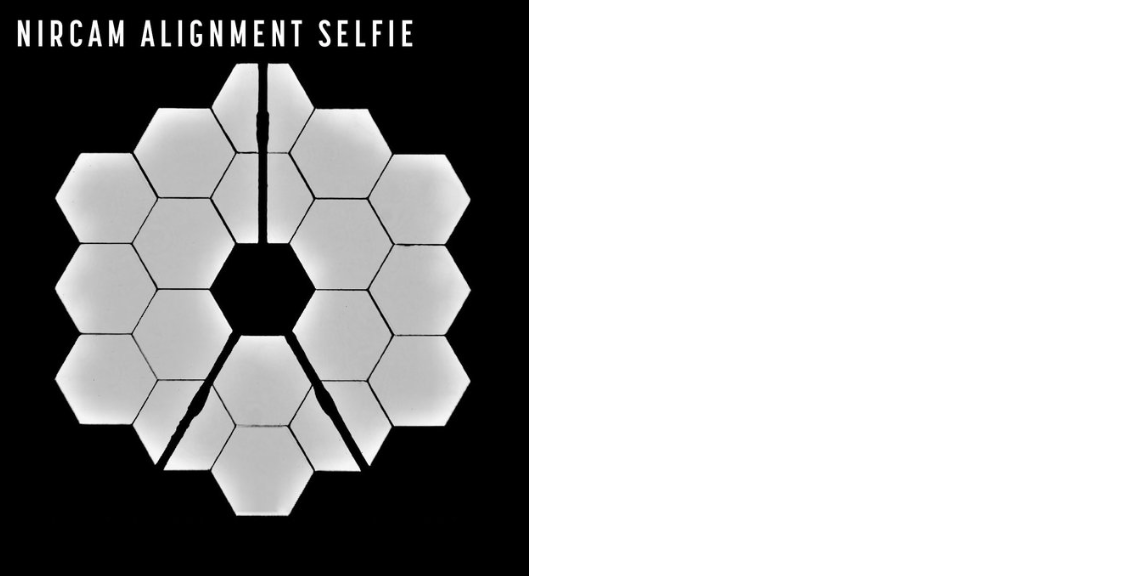 Below you see the resulting diffraction pattern from various spiders:

Diffraction is seen for point sources, which will typically mean stars, because they are bright. The brighter a source is, the brighter the spikes will be. If you exposed for long enough, you'd also see a diffraction pattern from the fainter point sources. Almost all the other sources in this image are galaxies. In principle you also see diffraction from extended sources, but as John Doty comments the pattern will be convolved with the surface brightness of the source, smearing out the spikes.

The bright galaxy seen ~edge-on at ~10 o'clock in the JWST image is a very distant one, with a redshift of 0.285 (source: Grant Tremblay's tweet), placing it at a distance of almost 3.8 billion lightyears.

20
Why will HD 84406 be chosen as the first target for testing JWST?
7
What are the bright dots in some galaxies in the first JWST image?
4
General process of calculating what a telescope's diffraction spikes would look like?

3
Why does the Moon's terminator look "wrong" in this image?
1
How to photograph Saturn
4
What's going on in this photo of Halley's comet's tail?
4
Why does the moon 'peel' away from the horizon in this photograph?
5
Why does the background noise in this image of 2020 QG look like corduroy?
3
What does the celestial sphere look like in thermal IR?
7
JWST First Image With Star 18x - Which image is from which mirror?
10
What is this object visible in the Chandra image of the Cartwheel galaxy that isn't visible in JWST image?
3
What is the story behind this supposedly incredibly detailed image of the disk of Proxima Centauri attributed to the JWST?
1
How close to itself can the JWST see? Inside our own system, or must it look beyond like it is far sighted? Essentially, can JWST see Mars or others?