How to determine the scale on astronomical images?

I've always been amazed at the many beautiful images of objects in the night sky. The Andromeda galaxy is a superb example. But it was only a few years ago that I discovered that Andromeda in those images is about six times bigger than the Moon. It is very very much fainter, of course, but it's actually a huge object in the night sky - covering more than three degrees.

The image below is NASA's Astronomy Picture of the Day for 2020 September 25 Moon over Andromeda, Composite Image by Adam Block and Tim Puckett. 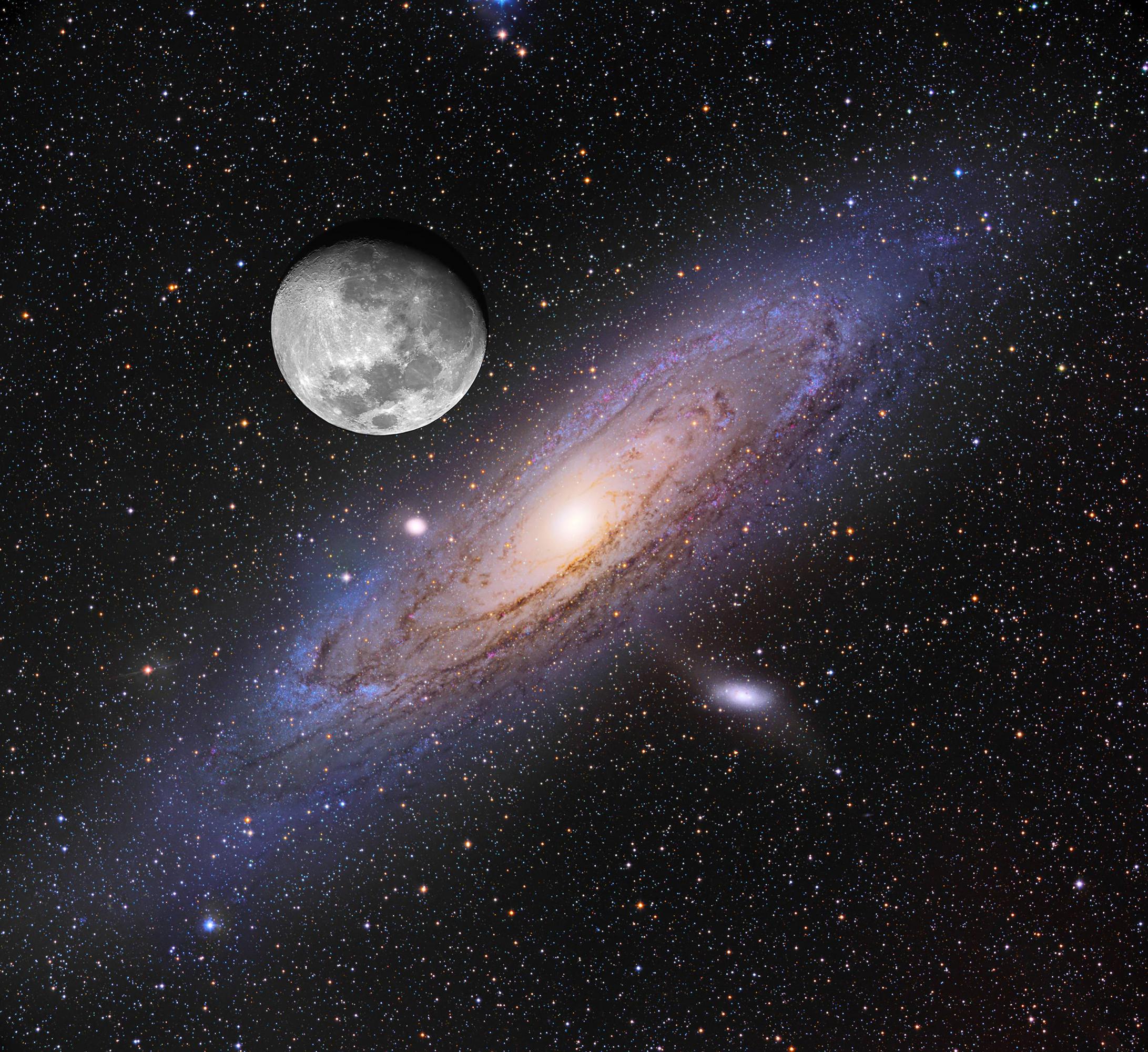 Explanation: The Great Spiral Galaxy in Andromeda (also known as M31), a mere 2.5 million light-years distant, is the closest large spiral to our own Milky Way. Andromeda is visible to the unaided eye as a small, faint, fuzzy patch, but because its surface brightness is so low, casual skygazers can't appreciate the galaxy's impressive extent in planet Earth's sky. This entertaining composite image compares the angular size of the nearby galaxy to a brighter, more familiar celestial sight. In it, a deep exposure of Andromeda, tracing beautiful blue star clusters in spiral arms far beyond the bright yellow core, is combined with a typical view of a nearly full Moon. Shown at the same angular scale, the Moon covers about 1/2 degree on the sky, while the galaxy is clearly several times that size. The deep Andromeda exposure also includes two bright satellite galaxies, M32 and M110 (below and right).

I've been looking at that very recent JWST focussed image of a test star with the beautiful diffraction pattern and the faint sprinking of background galaxies. Again, there's no scale. I'm guessing from the diffraction pattern arising from that vertical boom that the largest of those background galaxies is about 5 microradians (that boom looks about 10 cm thick and at 1 $\mu$m wavelength will produce a pattern with $10^{-5}/2$ radians between peaks - about the same size as that largest galaxy).

What is the scale on the image, officially? Where is it listed?

Scale is difficult in astronomy.

The only scale one can be sure about after careful calibration is the field of view, the angle one observes, thus the "arc seconds per pixel" or "degree per image width".

Every other size information derived from this already is part of the interpretation and needs additional information like the distance to the object which you cannot determine from that single image alone. And the distance information often is subject to change when further observations have been made and add to the available information on the object, forcing a re-evaluation along with the pre-existing data. Thus often the data are presented in the original form (e.g. this analysis by Godoy et al on exoplanet system observed with direct imaging) to allow quick re-adjustment of distance when the parallax of the object is evaluated differently than the original authors have.

The displayed image in the question is a good example that it would be very difficult to show any other scale than an angle scale even if one wanted to: the Moon is so much nearer than M31 that any length scale has to be wrong - depending on what part you look (and besides that, this particular image is of course a composite composed on the computer and not one image which aquired both Moon and the galaxy at the same time. But the same argument goes when imaging a distant galaxy with other objects in the Milkyway in the foreground). Actually it serves as a good measure for angular scale (about 30') - which might be the whole point for this composition, similar to how you place a well-known coin for size reference in macroscopic images.

Add to that uncertainty in linear scale, that images shown in magazines and on web pages are typically made to impress and show as much as convey scientific information, this information is often omitted. In the original FITS file from the observation (an image file format used predominantly in astronomy), the meta information on the FOV, pixel size etc. is often found, thus is the image already has that information.

This paper by J. Gardner quotes 0.032 arcseconds per pixel and 2.2 × 4.4 arcminutes for the field of view for JWST NIRCAM.

Not the answer you're looking for? Browse other questions tagged telescope photography size .

6
How does the Hubble telescope capture long-exposure photos?
44
How do we have photos of galaxies so far away?
1
False-color wavelength assignments in this "drop-dead gorgeous" image of NGC 2903?
2
High quality, detailed images of planets on web
7
What is the LSST's plan to address frequent satellite trails in data?
0
Questions about amateur astrophotographer Nik Szymanek's telescope
5
What is it about the layout of the three gratings in a Bahtinov mask that makes its indicate focus in this way?
5
How was the recently publicized Hubble image of a distant galaxy showing clearly resolved lensed in an Einstein ring produced? When was it produced?