In the Darian calendar entry on Wikipedia we read (emphasis mine):

Edit: I think I have found a possible solution: probably around the time of South hemisphere Summer, Mars is closer to the Sun. Though if it so, the South Summer is shorter in time.

The intensity of sunlight is therefore significantly stronger during the southern hemisphere summer. 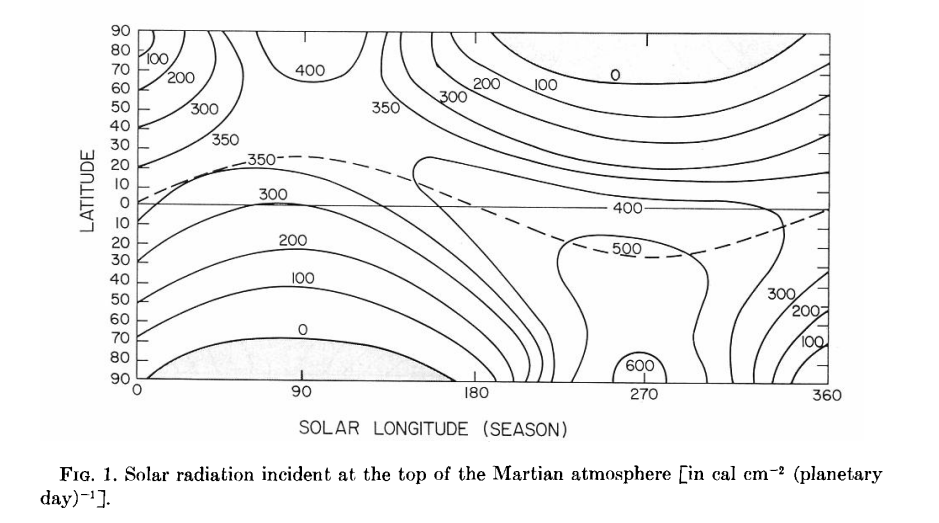 This chart, from "Solar Radiation Incident on Mars and the Outer Planets: Latitudinal, Seasonal, and Atmospheric Effects" shows that during the Northern summer, no part of the planet receives more than 400 cal/cm²/day, and mid-latitudes receive about 350. Whereas at Southern solstice, much of the Southern hemisphere receives more than 500 cal/cm²/day

Apart from the eccentricity you pointed out that has a role in a difference in the weather, one more factors that plays a role is the difference in the terrain and topology between the hemisphere. This is known as Martian dichotomy. The two hemispheres' geography differ in elevation by 1 to 3 km. The average thickness of the Martian crust is 45 km, with 32 km in the northern lowlands region, and 58 km in the southern highlands. The northern highlands is relatively flat while southern highlands has most of the impact craters.

What role does Martian dichotomy play on the weather?

Not the answer you're looking for? Browse other questions tagged orbit mars declination climate eccentricity .

10
Why is the time between equinoxes different?

11
Why is Mars considered the outer edge of the "goldilocks zone"?
5
What are the cloud-like blobs in the Martian southern hemisphere?
1
Why is declination positive in the northern hemisphere?
1
Day/Night Cycles and Seasons if the Earth's Rotational Axis and Orbit Changed
8
Why are Mars northern/southern hemisphere altitudes so different?
0
Does Mars' "Northern ocean" have another name? What about the "Inland Sea"?
2
Why are cirrus clouds more common on Mars?
23
When did people first measure that the Earth was closest to the Sun during January?
3
When and how was the length of a Mars year determined?
3
Is the 'spin' of Earth and the 'spin' of Mars a significant contribution to their angular momentum?