How much larger will the "observable by us" universe be when JWST becomes operational?

Right now, using all our various current means of observing, we can "see" a sphere of X diameter around us. Webb will increase that to Y diameter. So our observable volume will increase by some percent (Volume Y - Volume X) / Volume X.

I'm not sure I can rely on any values I find for X and Y using google searches. As of April 2022 what is the diameter of what we can presently observe and what is the expectation for JWST?

ADDITION: my apologies for not having enough subject matter expertise to frame my question as well as it might have been. I was thinking along the lines of pela's response. With JWST having a better set of instruments etc our practical ability would have farther reach. I've known there were physics limits to what could ever be observed that could not be changed. the CMB is not the type of observation I had in mind when asking the question.

I assume that by the "observable-by-us Universe", you mean not the theoretically observable Universe, which is given by the distance light has had the time to travel since the Big Bang, but the part of the Universe where we may practically see galaxies and other objects, not including the cosmic microwave background.

How far will James Webb see?

Predicting the redshift record for James Webb is not easy, since it depends on the unknown physical conditions of even younger galaxies. The important quantity is their (surface) brightness which depends not only on intrinsic properties such as their star formation rate, dustiness, and compactness, but also on the properties of the intergalactic medium, in particular to which degree it is (re-)ionized and hence able to transmit the light from the galaxies. Moreover, we also don't know how many there, so estimates rely on extrapolating their distributions of luminosities (luminosity functions) from lower redshifts.

However, sometimes we're lucky and line up with a massive cluster of galaxies acting as a gravitational lens which magnifies the light from distant background sources by factors of tens, hundreds, or even thousands. This may potentially allow James Webb to see some of the very first galaxies, predicted to have formed at $z\sim20\text{–}30$, 100–200 Myr after BB. I don't know of any peer-reviewed papers doing any serious estimates, but NASA routinely cites Webb's predicted record as "200 (or 250) Myr, possibly even 100 Myr" af the BB (e.g. here). If we really discover a galaxy 100 Myr after the BB, that would correspond to $z=30$, and a distance of 38 Glyr, i.e. a volume of $225\,000\,\mathrm{Glyr}^3$ which is 60% larger than our current "observable-by-us Universe".

The extension of our probed volume may not seem like a lot. A better way to understand the significance of this is to think about the age of the Universe at that time: It is likely that we will make the unknown epoch of the Universe half, or maybe even a quarter, of today's value.

The figure below is pretty much to scale: 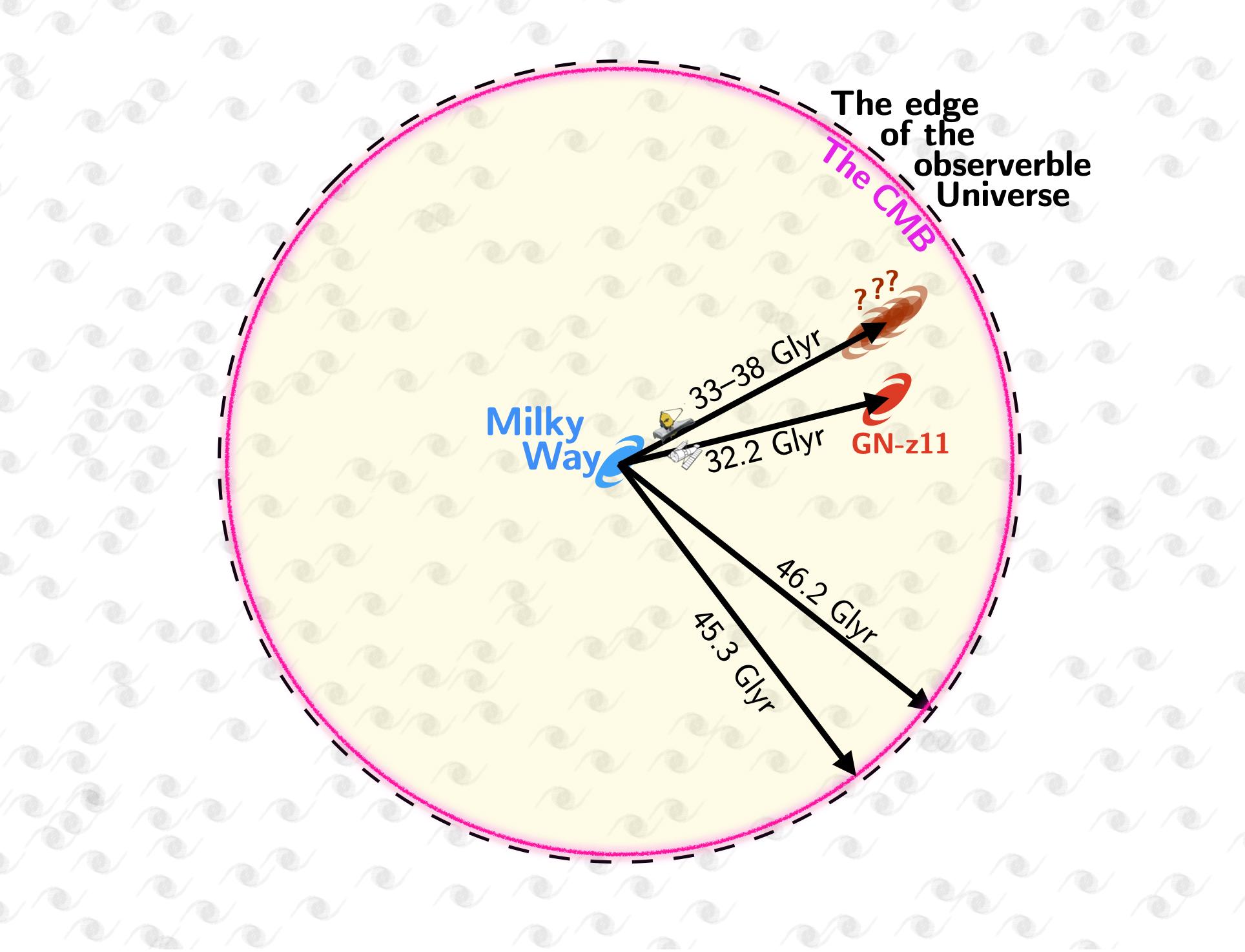 Not the answer you're looking for? Browse other questions tagged observable-universe james-webb-space-telescope .