Is there a better explanation of this picture showing the very distant star "Earendel"? 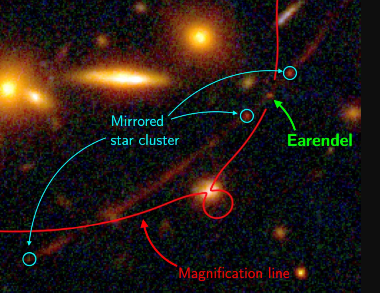 "Close-up of the tiny region where Earendel happened to fall right on top of the narrow line where the magnification increases by (tens of) thousands of times. A cluster of many stars is seen slightly offset from the line, resulting in a much smaller magnification but instead being mirrored by gravity. Credit: NASA/ESA/Brian Welch (JHU)/Dan Coe (STScI)/Peter Laursen (DAWN)" from phys.org.

The photo has been annotated by way of an explanation, but it's still not very clear to me what's going on.

There is a well-defined faint diagonal arc of light with several 'lumps' in it. Three lumps are labeled "Mirrored star cluster" and one is labeled 'Earendel'. The center of the arc is far beyond the top left corner of the image. This is presumably where the lensing galaxy cluster is centered. Do those bright objects in the top left have anything to do with this?

Why does it appear as an arc with blobs in it? Is it because the lens itself is a bit bumpy?

Then what about the red "magnification line"? This seems to be associated with the bright foreground(?) galaxy just below the center of the picture. The line forms a horseshoe loop around it. Is this an estimated line along which the field from the background galaxy cluster and the field from the foreground galaxy conspire to focus along two dimensions (more like a regular lens) and create a brighter more-familiar image of any object that happens to fall on that line?

Looking forward to a good explanation! 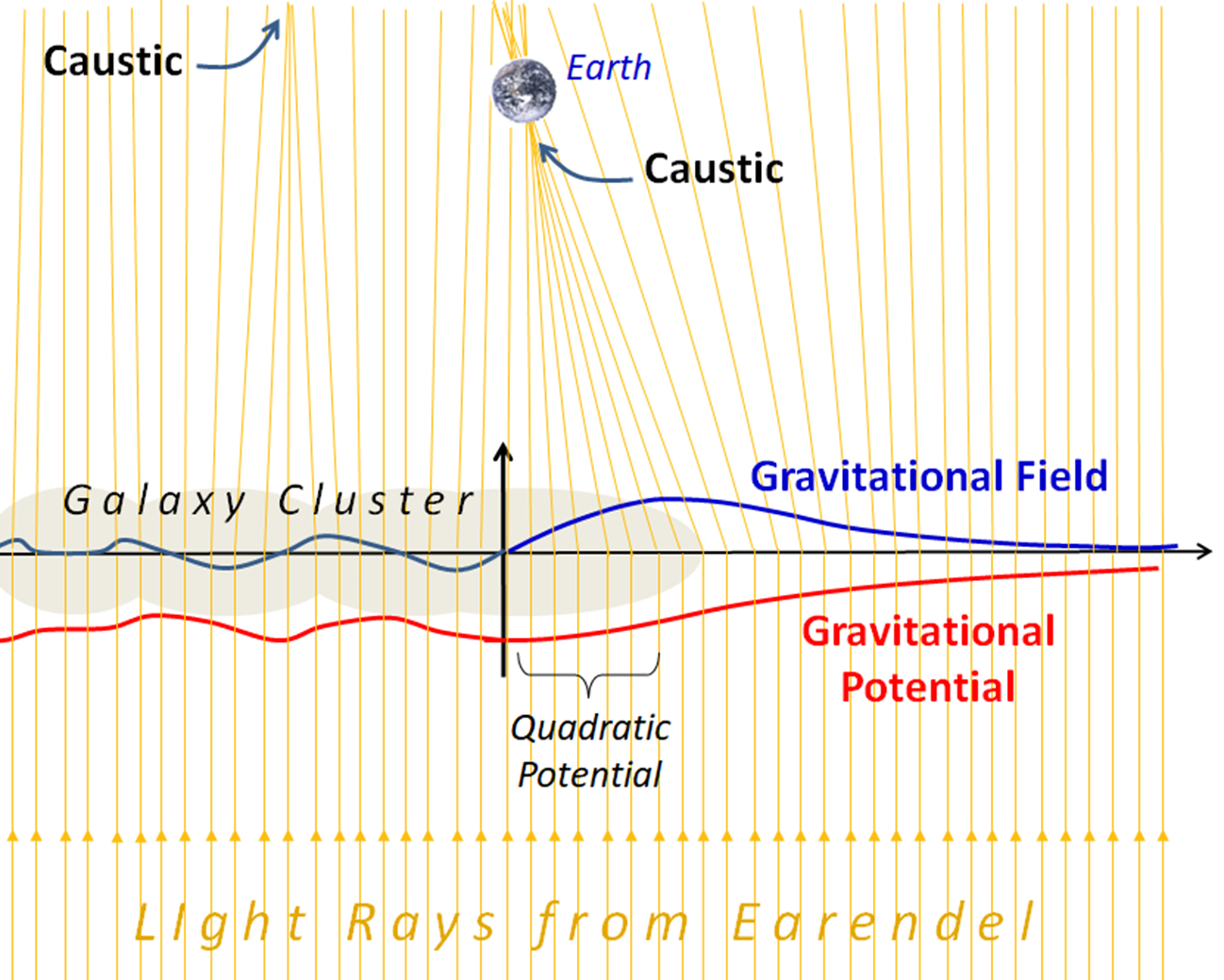 Cross section and ray-tracing to illustrate caustic formed as rays are bent by the gravitational field from the foreground galaxy cluster. The lens is effectively cylindrical - rather like a long, thin, lumpy sausage bent around the galaxy cluster.

(BTW I spent far too long making this picture!)

I did the annotation of that figure for the press release, so let me start by apologizing for the poor explanation, and then try to dig deeper into what's going on :) (although you already seem to pretty much get it right).

The big orange galaxies all belong to a foreground cluster called WHL0137-08. For known point masses, there is an analytical solution to how exactly the mass deflects and magnifies light from background sources, but galaxies are not points, and we don't know their exact masses. Nevertheless, based on the observed distribution of light, assumed stellar mass-to-light ratios and stellar mass-dark matter halo mass relations, as well as assumed halo density profiles, we can estimate numerically how light from a background source travels through/around the cluster, and hence how it's magnified.

This is called a lens model, and because of these not always too well-constrained assumptions, there are quite a few different models. This is why the mass of Earendel is only constrained to within an order of magnitude, namely 50–500 $M_\odot$.

A lens model thus returns a magnification factor for each 2D point in the vicinity of the cluster. In certain regions called "caustic lines", or just caustics, which lie along 1D lines, the magnification increases tremendously (in principle to infinity).

In the picture you see such a caustic, drawn in red. It bends smoothly around a handful of galaxies in the upper left corner, but where it comes close to the galaxy a little below the center, it bends around that one. The reason we're able to see Earendel is that it happens to lie almost exactly on top of the caustic.

Figure 2 from the paper (which isn't yet available online, but I think it's ok to share here with proper credits) showing the caustics predicted from four different lens models:

The red curve that I used in the image you post is the "Light-Traces-Mass model" (LTM; Zitrin et al. 2015). To understand the effect of the uncertainties in the model, the posterior distribution was sampled and used to generate critical curves from each resultant parameter set. Those are the thin brown lines close to the red. In 80/100 of such model runs, Earendel is within 0.1 arcsec of the line, with a maximum of 0.4".

If an objects lies close to, but not on top of, a caustic, its light will be bent around it and reach us from two different directions. Close to Earendel lies a small star cluster (called "1.1" in the paper). Because of the way the caustic bends, 1.1 is mirrored not twice but three times, indicated in cyan. In fact there's a second star cluster called "1.7" that I didn't mark, to keep it simple, but you see it as slightly enhanced dots of light along the red arc.

So, what is that red arc? That's the host galaxy — called WHL0137-zD1, but nicknamed the "Sunrise Arc" — of both the star clusters and Earendel. This is a typical feature of gravitational lenses, distorting background galaxies to banana-shaped arcs along directions which are more or less tangential to the cluster. In fact, the Sunrise Arc is one of the longest known, being 15 arcseconds long.

Stars are much too small to be spatially resolved by our telescopes, however, so they are seen as point sources. In principle their sizes do increase when they're lensed, and in principle they may also be elongated, but they are so small that they're still way below our resolution, and will always be seen as point sources. Hence, for stars the magnification just refers to the increase in brightness.

If Earendel is 10× the diameter of our Sun, its angular extent seen by us would be $\sim10^{-10}\,\mathrm{arcsec}$. Even if Earendel is magnified $10^5$ times — the estimated maximum according to the lens models — it's still of the order of ten microarcsec, unresolvable by both Hubble and James Webb. This resolution is actually within reach for interferometry, but that would require Earendel to be bright in the much longer wavelengths required for that technique, which it isn't.

3
What exactly is it that is being magnified 50 times in this gravitational lensing observation?
5
Earendel and HD1; identifying population 3 stars and galaxies
3
Why does Hubble's F850LP filter have a different shape than all the others shown in Dr. Becky's video "ALL THE DETAILS on Earendel..."?

7
Very bright star in the east at northern hemisphere. What is it?
3
Why can't this be the simple (and obvious) explanation for the dimming of KIC 8462852?
4
Can the explanation of Tabby's star KIC 8462852 be an intervening planet in orbit around another star?
6
If we had the right technology could we see a distant star in detail?
9
What's the white glow around this star?
5
How was the recently publicized Hubble image of a distant galaxy showing clearly resolved lensed in an Einstein ring produced? When was it produced?
3
Why does Hubble's F850LP filter have a different shape than all the others shown in Dr. Becky's video "ALL THE DETAILS on Earendel..."?