Intrigued by my recent question about the average angular distance between the Sun and the Moon, I tried to inquire this little more in attempt to find the source of the asymmetry. Basically I have two questions about my finding: (1) A diagram of the frequency of the elongation (this time all 360 degrees) was constructed using average of 1900 years (23500 synodic months). this pattern could be easily discerned even using only 19 years though less clean (I didn't try less). 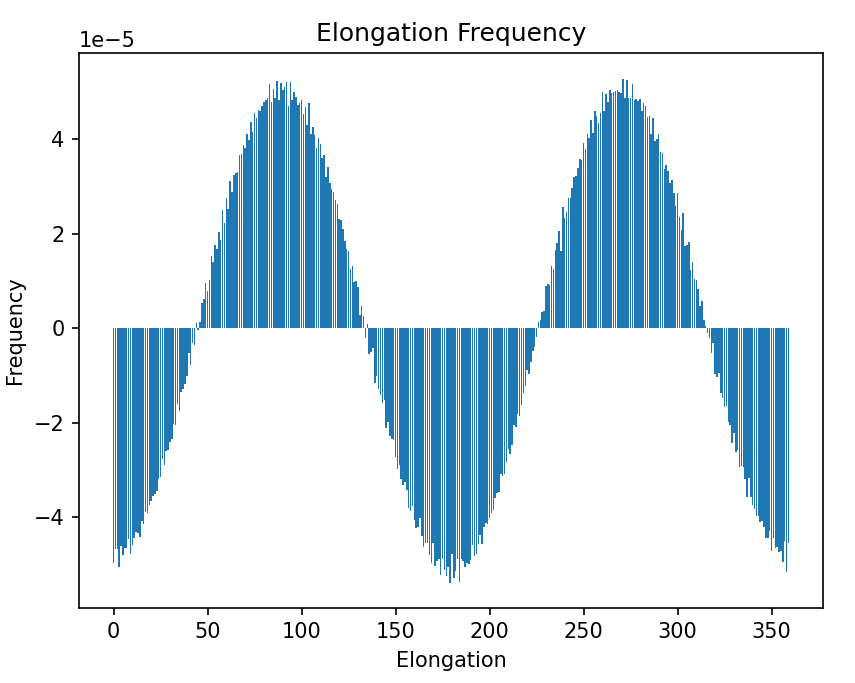 The diagram shows for each whole degree of elongation, how much its frequency is above the average frequency of 1/360. I was expecting to see in the diagram the effect that called Parallactic_inequality, Since this is the only principle term that is solely dependent upon the elongation (mean elongation rather than the true, it should be noted); Other terms, I thought, are mix between elongation and other parameters (like perigee location) hence should be expected to cancel over the long term.

We can clearly see something - which is probably indeed this effect of Parallactic_inequality- but after some thought, something still does not add up to me: If I understand correctly, the term of this inequality $ -125''\sin(D)$ is basically accumulative in nature: meaning we should see the greatest effect at an elongation of 90 and 270 where the Moon will be mostly removed from his location. but what elongation location contributes the most to this accumulative effect? If we look at the derivative of the term, we see that the Moon is slowest in New Moon when the elongation is 0. But according to the diagram the Moon is slowest at 90/270 elongations. What am I missing? It actually also matches what Wiki says "Its effect is that the Moon is a little behind at first quarter, and a little ahead at last quarter" - hence it follows that the Moon should be slowest at the new moon between the last and the first quarter.

(2) Now, for the second part, which is why I started the inquiry in the first place: namely that the average elongation is less than 90 (or less than 180 if we use 360 degrees). For that end, this diagram was created: 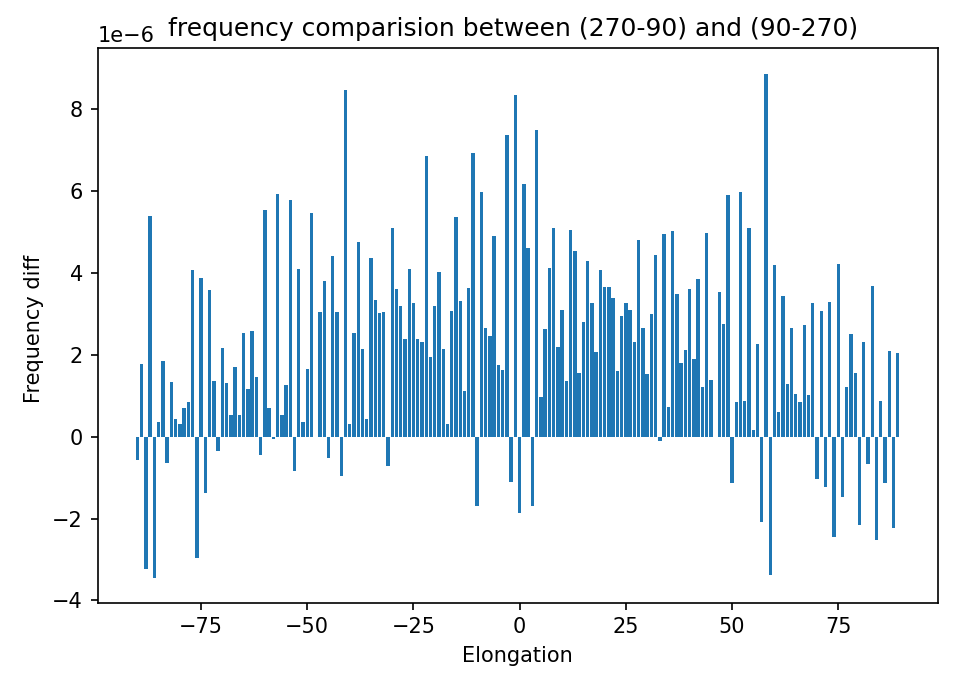 The diagram displays the for every elongation near the New Moon (between -90/270 and +90), the difference with the corresponding elongation in the Full Moon half (between 90-270). We can see the asymmetry, but it is quite ugly and not sinusoidal; rather it runs across all board (expect near the quarters). i.e., the frequency of elongation 30 is higher than the elongation of 210 in about the same that elongation 60 is higher than elongation 240. In my previous question, in which I suspected this effect exists, and in my answer there I said it might be due to some "complex" mechanism that is basically due to the fact the irregularities and precessions of the Moon are not independent of each other since they are related to the Sun so we might see this kind of effect. But, though I believe the recent diagram gives some evidence to my idea, I can't pass the level of hand-waving here - and great chances of being wrong. I seek an explanation to this phenomenon. It might turn up eventually to be sinusoidal - but resulting from not significant small term. At any case, it should be reminded that this asymmetry is only visible when we average a lot of years. The average might be above 90, even for a period of above 50 years.

5
What is the average angular distance between the Sun and the Moon?

37
Why does the Moon appear gray when passing between the Sun and the Earth?
3
Length of a tidal day or by how much is the Moon late each day?
5
Are these parallel lines I'm seeing in this image a real pattern on the Moon?
9
When the Moon formed and early on, did it orbit over the Earth's equator?
2
How to calculate exact angle to the moon?
1
This article says the moon may start moving closer to the Earth in the distant future; could this be true?
4
How to calculate the nodal precession range of the Moon with respect to the celestial equator?
5
What is the average angular distance between the Sun and the Moon?