What is the current understanding of the results of the merger associated with GW190425? Black hole? Neutron star? Something else?

In an exhibit on gravitational waves I saw a display of events. Each event was in a box, two circles at the top represent the orbiting objects before merger, a single circle below them represent the "best guess" resulting object.

The sizes (and numbers next to them) represent the masses of each, and the color (black or blue/gray) indicate assignment as a black hole or a neutron star. In cases where there is substantial uncertainty or near-even probability, the circle is divided in half, one side black the other blue/gray.

I noticed that for the GW190425 event the two initial objects are 2.0 and 1.4 solar masses and shown as neutron stars, and the final object at 3.2 solar masses is shown with both black and blue/gray halves, indicating that the assignment wasn't made.

I looked at Abbott et al. (2020) GW190425: Observation of a Compact Binary Coalescence with Total Mass ∼ 3.4 M⊙ which as far as I can tell doesn't say anything about the nature of the final object or even show a strain waveform.

Due to the large total mass of GW190425, the two stars form a black hole shortly after the merger, in contrast to GW170817. In addition, the mass of the ejecta matter and the debris disk mass is significantly smaller than for GW170817, which makes a detection of an electromagnetic counterpart very unlikely and might explain that no electromagnetic follow-up observation has been successfully detected an electromagnetic transient.

which seems fairly conclusive, though I can't yet figure out why they think so or find a source.

Question: What is the current understanding of the results of the merger associated with GW190425? Black hole? Neutron star? Something else?

Wasn't there some way to analyze the ringdown in order to identify whether the result was a neutron star or a black hole?

For reference only: this is what got me curious enough to ask the question. 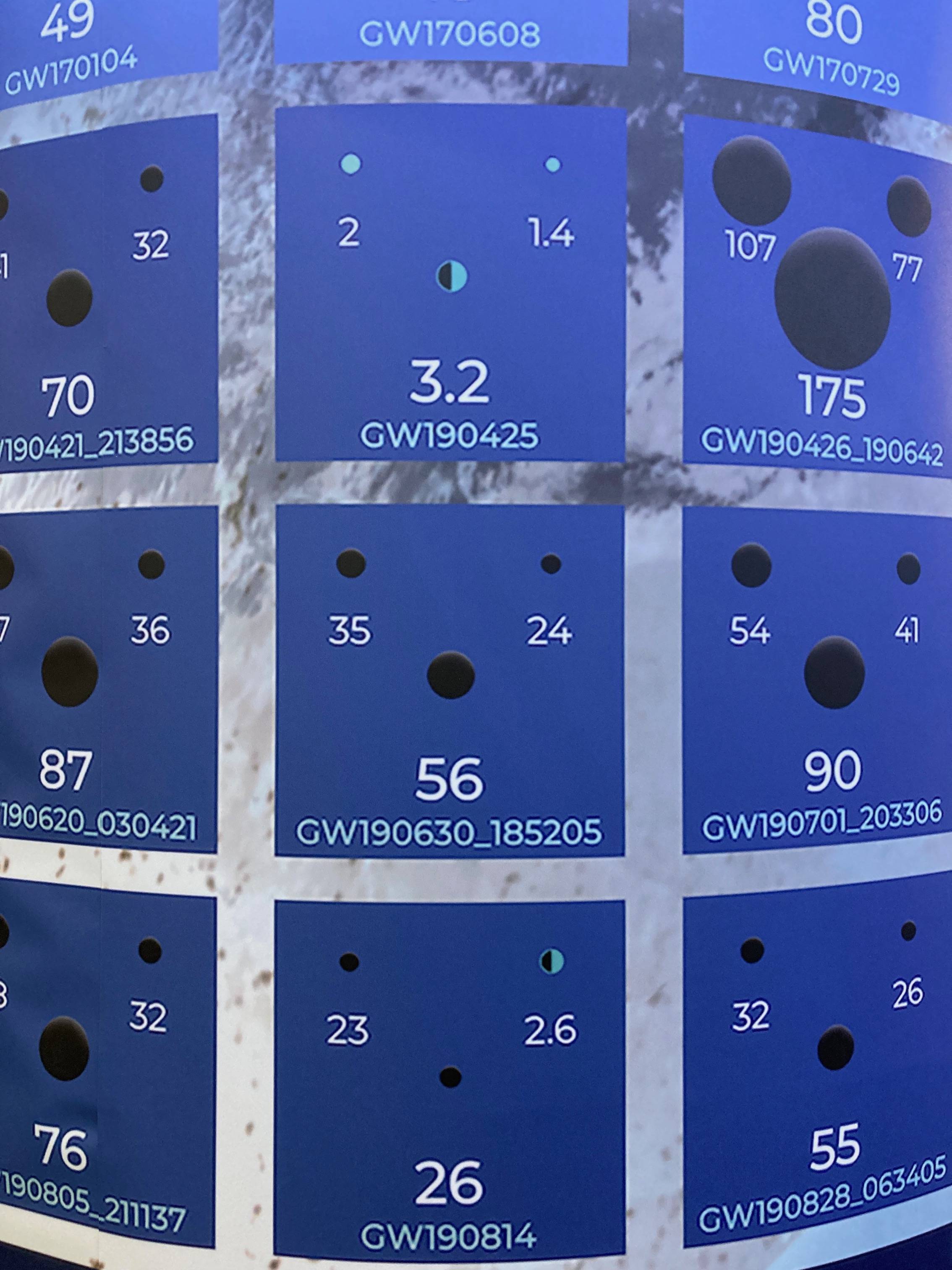 GW190425 was the first event to be confidently detected based on data from a single detector. This means that the localization on the Earth's sky was likely not as good as if multiple detectors observed it. As such, no electromagnetic counterpart was observed for this merger.

The source-frame chirp mass and total mass reported by LIGO/Virgo are larger than those already known of binary neutron stars in the galaxy. If one considers many possible formation scenarios involving neutron-star binaries and black-hole neutron-star binaries, then it's most likely that this event resulted in a black hole remnant, and such models imply that if there was an electromagnetic counterpart it would have been redder and fainter than the counterpart of GW170817 meaning that electromagnetic observations may have missed the counterpart. However, high mass neutron star binaries are not generally expected to produce observable EM counterparts.

Assuming that the sky was searched for an EM counterpart with sufficient accuracy and there was no kilonova to be seen, numerical relativity simulations can be useful for constraining the mass ratio of binary neutron star mergers.

Regarding your question about using ringdown to constrain the type of compact remnant, the ringdown signal for BNS mergers is at frequencies of several kHz and is not easily measurable by current LIGO/Virgo detectors. The original analysis of LIGO/Virgo attempted an unmodeled search (meaning without assuming a particular type of source) for the postmerger and found no statistically significant signal (see section F.7 of this). Future detectors, such as 3G detectors, will more easily access the kHz regime, where tidal deformability in the ringdown may be observed for neutron star remnants and may be used to determine the type of remnant.

Not the answer you're looking for? Browse other questions tagged observational-astronomy gravitational-waves .

3
Observation of Gravitional waves by LIGO from binary black hole merger
11
What would it feel like to be orbiting near a merging black hole?
17
"Who saw" the binary neutron star merger first? What was the sequence of events? (GRB/GW170817)
11
Do mixed type remnant collisions produce anything interesting?
0
What is the "hypothesized lower mass gap" between 2.5 and 5 solar masses?
5
Why isn't IMBH candidate GW190521 very "chirpy"? Which types of events will produce the most chirp-like behavior?
1
Fraction of initial mass lost (radiated) by neutron star mergers compared to black hole mergers?
4
What would a kHz gravitational wave detector look like? (mountains on millisecond magnetars) How would it differ from LIGO/Virgo?