I'm planning on making a video related to Fermi Paradox, and I've used Omni Calculator's Alien Civilization calculator as a reference. I noticed they have a field that calculates the "maximum" distance to an alien civilization based on the amount of civilization in the Milky Way.

I've attempted to recreate the equation used for calculating this as their calculator doesn't explain how this is calculated, but my number doesn't exactly match theirs. I used the following equation:

What it does is take the number of civilizations in the galaxy, then find how large a sphere volume one civilization would take up assuming they were evenly distributed, and then finds the diameter of such a sphere, and that diameter is the maximum distance to an alien civilization. So, by definition the Earth would be at the center of our volume, and to get to the next civilization you would have to leave our volume, so the distance to the next volume is the radius of the volume, and to get to the planet at the center of the next volume you'd have to cross another radius of distance, meaning the total distance is the diameter of the volume. To be clear, I'm not sure if this equation even calculates a meaningful number even assuming the civilizations are evenly distributed, which they are not.

So, if I take the number of civilizations in a galaxy as 928, and the volume of the Milky Way as 8.333 trillion cubic light years:

the result of 2579 light years is about 1.29 times lower than the Omni Calculator's result of 3320 light years.

Does this equation even work assuming the civilizations are evenly distributed across the galaxy, and does anyone have a better equation for calculating the maximum distance to an alien civilization?

EDIT 1: I might have found the equation in the scientific paper The Astrobiological Copernican Weak and Strong Limits for Intelligent Life, but I'll have to read it thoroughly to actually understand it, so I'll update here when I do that.

EDIT 2: I believe I have found the exact equation used in the scientific paper The Astrobiological Copernican Weak and Strong Limits for Intelligent Life, and on the Omni Calculator's page, the equation is (I slightly modified it to add the civilization volume, which was in the paper a separate equation) as follows: $$d_{max} = 2\times\sqrt{\frac{\frac{1}{N_{civilizations}}V_{galaxy}}{0.3 kpc\times\pi}}$$

where N is the number of civilizations in the galaxy (you can derive that number either from the Drake Equation or from the equation used in the mentioned paper), the V is the volume of a galaxy (Milky Way's is approximately 8 trillion cubic light-years) and kpc is the distance unit (1 kpc = 3261.56 light years).

The results match almost 1:1 to Omni Calculator's. I believe the very slight difference is due to the different galaxy volumes used. I used 8 trillion cubic light-years when calculating, and Omni Calculator might have used a more specific number), or potentially due to Omni Calculator more precisely calculating the civilization volume based on the given parameters (the latter is likely correct).

Note: The number given by the equation has a very large uncertainty.

Suppose civilizations are randomly distributed in the galaxy (not necessarily evenly, but independent of each other). That means that there is a CDF $\Pr[d<x]=F(x)$, the probability for the distance $d$ to one of them being less than $x$. If there are $N$ civilizations, then the probability that all of them are inside distance $x$ is $\Pr[d_1,d_2,\ldots d_N<x]=F(x)^N$. So if you know $F(x)$ you can easily find the median distance for a random civ by solving $F(x)=1/2$, and the median distance to the remotest by solving $F(x)=2^{-1/N}$. You can calculate the mean too by cleverly integrating the CDF. Note that the same trick can be used to find the distribution of the closest civilization distance: it is $\Pr[d_1,d_2,\ldots d_N>x]=1-(1-F(x))^N$.

The above is nice and general, but not exactly what the question is. In fact, trying to reverse engineer the calculator formula is likely wasted effort: it doesn't make much sense (more civilizations should make it give a more remote remotest civ).

My simplest approach would be to say that civilizations are uniformly distributed in a spherical volume corresponding to the milky way (of radius $R$) with Earth in the center (yes, this is wrong but not entirely wrong). Then their distance CDF will be $F(x) = (x/R)^3$ up to $x=R$, and 1 beyond. So I get a CDF for the remotest that is $(x/R)^{3N}$ and a median distance $x=R \cdot 2^{-1/3N}$. This behaves right: as you get more and more civs, the outermost will be almost exactly at the edge $x=R$.

A better model is to assume the Milky Way is a cylinder, and that the sun is in an offset position from the center. Unfortunately I don't know enough stochastic geometry to get $F(x)$ in a closed form. Basically, $F(x)=$[galactic volume inside x]/[total galactic volume]. This can be solved numerically. But if you are solving things numerically you can in principle go full hog and use realistic star densities or even galactic habitable zones.

Addendum: I couldn't resist actually doing it. I took an approximate stellar density model (from Carrol & Ostlie) that I assumed is equivalent to a civilization probability density, did a numerical integration in Matlab and calculated the approximate distance. 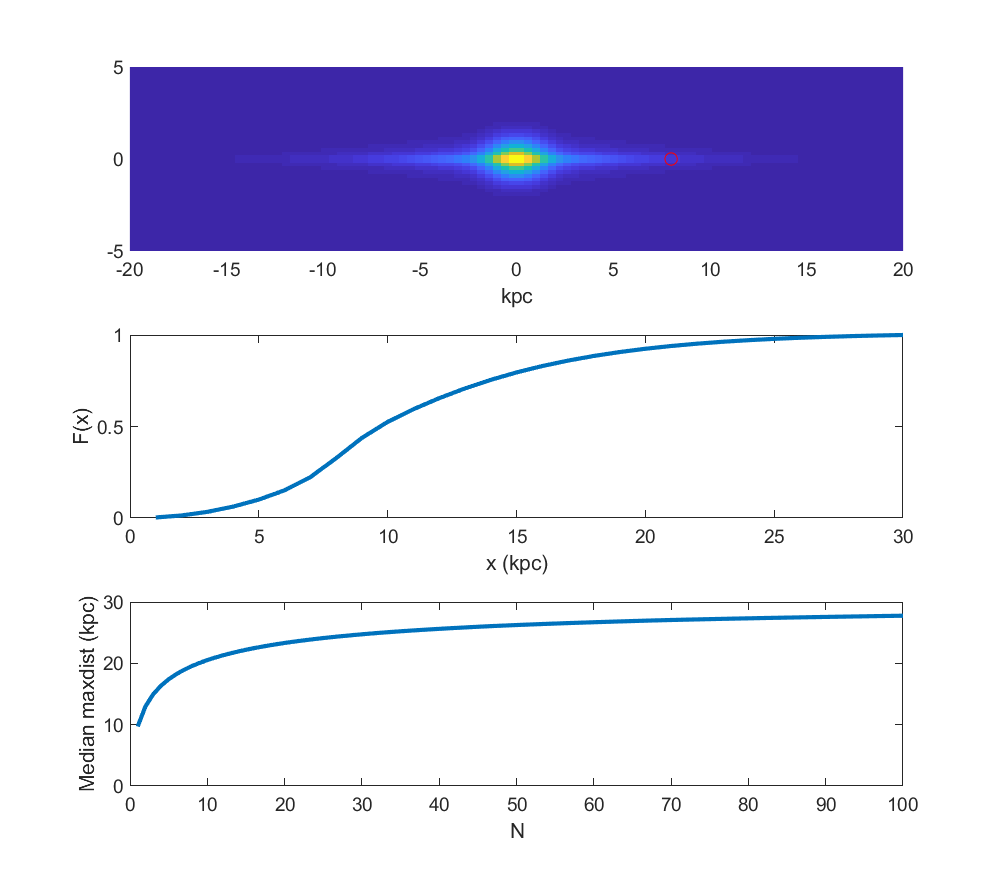 This doesn't give an explicit formula, but shows the overall behavior. $F(x)$ is basically a sigmoid with a turning point near the distance to the galactic center. The furthest distance grows slowly since there are rare stars far away from the galactic plane.

Adding a ring-shaped galactic habitable zone (not shown) makes it more of a linear rise, producing a much flatter distance distribution (furthest civilization will be at the far end of the ring).

Not the answer you're looking for? Browse other questions tagged galaxy life extra-terrestrial astrobiology .

5
Is the discovery of Alien or Extra Terrestrial Life a function of the science of Astronomy?
15
Statistically, what would the average distance of the closest black hole be?
8
How should one rationally deal with the issue of space travelling alien civilizations?
8
What astronomical observations would give conclusive proof of alien life?
3
Could the KIC 8462852 (Alien megastructure star) be explained by orbiting gas clouds?
3
Consequences of strong wind on an alien Planet on the possibility of life
2
When calculating absolute magnitudes of distant objects, do you use the light-travel distance or the comoving distance?
3
Would we be able to discover a Voyager-style probe from a stellar civilization?