What determines the speed of a star's solar wind?

I'm wondering if different stars produce wind at different speeds, and if so, what factors determine that speed.

Per this answer, our star produces wind with a speed between ~250–820 km/s. It seems safe to assume that the wind speed for each star is variable.

This other answer gives the Reimers mass-loss formula, which accounts for loss via radiation and wind, but states that one term must be measured empirically. (And, in any case, I'm interested in wind speed, not mass carried away.)

Wikipedia says we don't have a very good understanding of how the solar wind is accelerated, which suggests it may not be possible to answer this question.

Still, as a layman, it seems like it should be possible to make general predictions about a star's wind, given a few facts about that star, namely: mass, angular velocity, and age.

All stars, and also planets, lose mass because of atoms escaping from the atmosphere that are faster than the gravitational escape velocity. This suggests already that gravity i.e. the mass of stars is the crucial factor here. The gravitational potential energy of an atom with mass m near the surface of a star with mass M and radius R is of the order

where $G$ is the gravitational constant.

and according to the virial theorem, the associated kinetic energy is

which corresponds to a temperature

where $k$ is the Boltzmann constant.

If you evaluate this for the Sun, you get

which corresponds to a thermal speed of hydrogen of

This is essentially the solar wind speed we observe.

Given the fact that the radius $R$ in the denominator in the first equation increases with mass as well (depending on the mass-radius relationship) and the square root in the last equation, the dependence of the stellar wind speed on the mass of the star should be fairly weak though.

Of course this would only be an average speed. The fact that we are dealing with charged particles here introduces all kinds of electromagnetic effects that can change the observed speed quite drastically in certain situations.

For low-mass main sequence stars, there are no observations to make an empirical relationship and there are major theoretical uncertainties in estimating a wind velocity. This is discussed by Johnstone et al. (2015a) who find the wind velocity is (at 1 au) $$v = 73.39 + 221.14T_0 - 11.28T_0^2 +0.28T_0^3\ , $$ where $T_0$ is the base temperature of the wind. The main uncertainty is whether the base temperature of the wind is determined by the magnetic fields present (since the corona is ultimately heated by magnetic fields), or whether it is directly connected to the stellar escape velocity. If the former, then the wind speed will be connected with the rotation rate of the star and its spectral type in a very non-linear way. Some plots are presented by Johnstone et al. (2015b) and I reproduce one of these below. The rotation dependence is manifested as an age dependence since these stars spin down as a result of their magnetised winds. This in turn reduces the dynamo-induced magnetic activity and reduces their coronal temperatures. 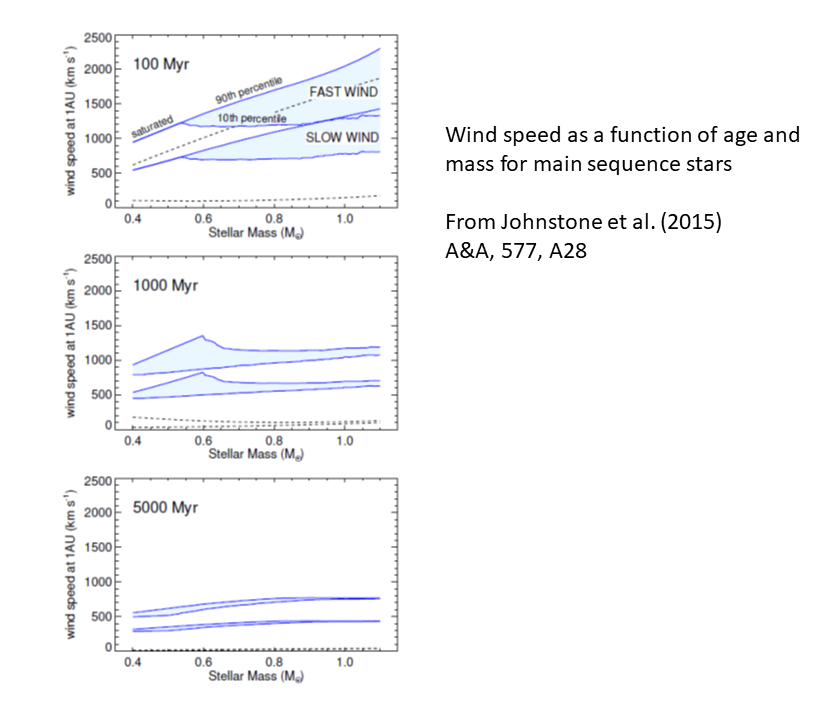 Hot, early-type O and B stars have winds driven by radiation pressure. The theory of "line-driven" winds is complex and cannot be simply summarised in a SE answer. The terminal wind velocity is usually 2-3 times the escape speed at the star's photosphere. But there is a complex detailed dependence of this factor on spectral type and hence luminosity (or mass). The terminal wind speeds are in the range 1000-3000 km/s for B $\rightarrow$ O-stars. This relationship of a few times the escape velocity works reasonably well for Wolf-Rayet and other hot, evolved stars too.

The winds from cool giants are radiatively driven, but this time the opacity source is dust. For these stars, the terminal wind velocity is given approximately by $$ v_{\infty} \simeq \frac{v_{\rm esc}^2}{1000\ {\rm km/s}}\ , $$ which is lower than the escape velocity. Roughly 10 km/s for M-type supergiants, up to 70 km/s for K-type giants. Higher velocities are not found because the dust disintegrates by sputtering once accelerated to these speeds.

Not the answer you're looking for? Browse other questions tagged solar-wind .

4
Energy carried by solar wind
2
Does a red giant star produce more stellar wind than a yellow star?
1
Stars as nozzles; how important is thermodynamics and the de Laval nozzle equation for understanding the speed of the solar wind vs distance?