Does the observed Perihelion precession of Mercury still deviate from prediction?

In Wikipedia section about the Perihelion precession of Mercury, we have the follwing table titled "Sources of the precession of perihelion for Mercury":

Two things caught my eyes which I failed (maybe I was misunderstanding/reading the text) to find explanation for in the text:

As far as I understand, resolution of 0.5arcs can be easily distinguishable today (say even 0.05 arcsec in 10 years) - so there appear to be a gap between the prediction and observation - a theory gap? Or does it stems from the the uncertainty of accuracy of the Mercury-Sun distance which is to such an extent to cause 0.5arcs sec movement in aphelion in 100 years? or something else?

(*) A more detailed reference to the prediction (from which the figure was taken from Wikipedia) with uncertainties can be found at Park, Ryan S.; et al. (2017). "Precession of Mercury's Perihelion from Ranging to the MESSENGER Spacecraft". The Astronomical Journal. 153 (3): 121. 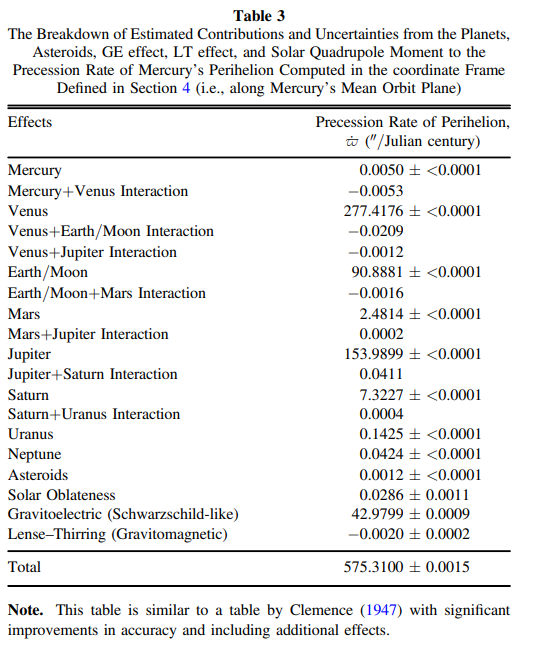 Though Wikipedia writes: "The total observed precession of Mercury is 574.10″±0.65 per century[12] relative to the inertial ICRF", its source is from Clemence, G. M. (1947). "The Relativity Effect in Planetary Motions". Reviews of Modern Physics. Which is quite old article.

The figure of 575.31, on the other hand, is from much recent article (Park, Ryan S.; et al. (2017). "Precession of Mercury's Perihelion from Ranging to the MESSENGER Spacecraft". The Astronomical Journal. 153 (3): 121.). This paper, to the extent I understand, basically shows a match between the prediction (with improved breakdown of the causes) and the observation (emph. mine):

Conclusion: We have processed the MESSENGER ranging data as a part of JPL’s planetary ephemeris development process... . We also estimate the total precession rate of Mercury’s perihelion of (575.3100 ± .0015)″/century that corresponds to our solution and provide estimated contributions and uncertainties due to various perturbing effects.

Moreover, Older version of this Wikipedia article shows this table instead:

In this table there is match between predication and observation, as - if I understand - appears in Clemence, G. M. (1947).

So with the recent 2017 data, an edit was made on Wikipedia page, but it only modified the causes and not the observed figure and thus causing this mismatch (though, as Allure points out in a comment, is only about 2 sigmas; and hence still works; but again the sentence from Wikipedia above is somewhat misleading because it gives the impression that 574.10″±0.65 is a much recent value - hence I was somewhat surprised by this ±0.65 to be high for modern value and did not fully understood what it means. Now it is clear.) . For what I was able to gather from other sources the observed figure of the precession is indeed 575 arcsec per century.

Not the answer you're looking for? Browse other questions tagged solar-system mercury .

11
Motion of the sun as observed from mercury
6
What are the exact physical parameters used to calculate Mercury precession with Einstein theory?
11
Are there ever any simultaneous transits of both Mercury and Venus as seen from the Earth?
1
What does the surface of Mercury look like?
2
Why does in-the-sky.org say that Mercury is not visible from Taipei these days?
5
Does the axial tilt of Mercury and Venus vary?
2
What effects does the motion of the Sun have on the perihelion precession of Mercury?
1
Is it still the case that the transit of Mercury can't be measured with sufficient accuracy to determine the Sun's distance?
20
Does anything orbit the Sun faster than Mercury?
3
How the "precession of the ecliptic" can be distinguished from the "precession of the equator"?