Why haven’t we observed supernova events of the hypothetical population III stars?

It’s said that we haven’t observed any population III stars because these stars are too far away, which makes them too dim to observe via small diameter space telescopes. Their light is also extremely redshifted (within the infrared spectrum) and unable to penetrate the atmosphere. However, these two reasons do not apply to supernovae. Because a supernova is extremely bright (even brighter than the Milky Way galaxy) they are easily observed even at cosmological distances. Second, supernovae also emit powerful radiation at short wavelengths (such as gamma rays emitted from nickel-56), which should fall within the detection limit of our equipments despite extreme redshift. Since population III stars are hypothesized to be extremely massive (hundreds of solar masses) and extremely metal poor, they should be able to give rise to spectacular pair-instability supernovae (between 150 and 260 solar masses). Although stars of even higher masses are speculated to collapse into black holes directly, they are unlikely to represent all population III stars because the black hole should consume virtually all heavy elements created in the core, leaving little available for stars of newer generations.

The problem is really the distance here. I believe the most distant supernova ever observed is SN 1000+0216 at redshift 3.9. This observation was possible only because of the extremely high and unusual luminosity of the supernova, that is in fact believed to originate from some pair instability mechanism, but it is not confirmed to be a Pair Instability SuperNova (PISN).

But even if SN 1000+0216 were indeed a PISN, it would probably not be coming from a Pop III star, because redshift 3.9 is too low. Most models find that Pop III stars should become rare below redshift 10. They may still be found in some metal poor dwarf galaxy down to redshift 6. But by the end of reionization (redshift 6) they should be completely extinct.

Unfortunately, observing a supernova at z>6 is presently largely out of the reach of our telescopes (unless we are extremely lucky with a gravitational lens such as in this case).

Regarding the wavelength, the best spectral range to observe PISN would arguably be the infrared, because, as you noted, the peak emission that in the rest frame occurs in the visible/UV, would be redshifted to the IR. Regarding X and gamma rays, I am not an expert, but I can imagine that most of the emission would happen (in the rest frame) at energies of the order of the KeV or above, so that no sane amount of redshift would be sufficient to shift it to the visible/UV. Please, correct me if you think this is wrong.

For observation in the IR band, things will change with the next generation of space telescope (JWST, Euclid, Roman..). Look for example at these two papers that try to estimate the number of PISN that will be seen by Euclid during its 6 years of observations.

Euclid is not built with the aim of observing distant supernovae, but thanks to its large field of view (its deep fields are 10 and 20 deg$^2$), there is a chance that it will capture some PISN while looking at other things.

Nonetheless, according to the authors, Euclid will not be sufficient to detect PISN from Pop III stars. Look at this figure from the first paper: 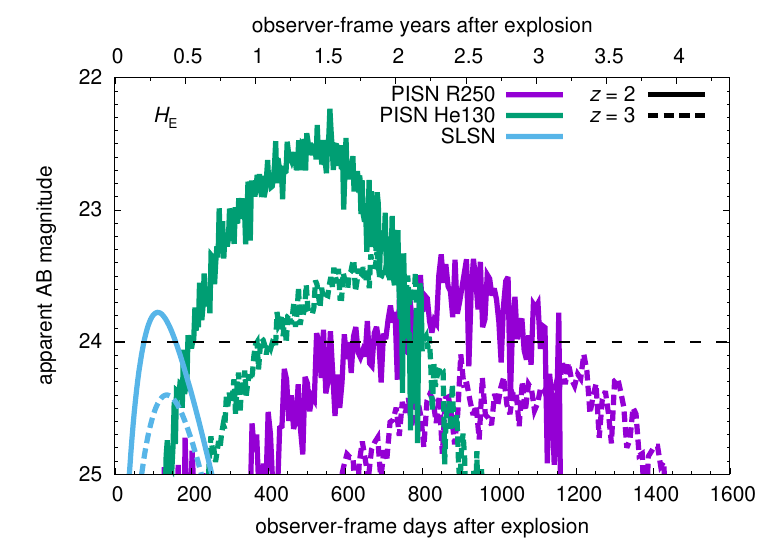 These are theoretical PISN light curves, as expected to be seen by Euclid. The violet template comes from a red supergiant, the green template is a helium star, and the cyan template is a Super Luminous Supernova (not a PISN). The solid lines are at redshift 2, the dashed lines are at redshift 3. The horizontal black dashed line is Euclid's estimated magnitude limit. Anything below that line cannot be seen by Euclid. You see that a PISN at z=3 is already near the detection limit of Euclid. In fact, the authors conclude that Euclid will probably see some PISN, but they will be at redshift < 3.5 and thus not come from Pop III stars.

Summing up, the problem is that, even though Pop III stars explode in extremely bright supernovae, they are too far away to be reliably detected with present and maybe even with next generation telescopes.

Massive Population III stars are thought to predominantly exist for a short period of time during the initial stages of galaxy formation and prior to the epoch of reionisation at $z \sim 6-20$ (though much rarer examples may exist at lower redshift). Indeed, they are thought to be one of the primary drivers of reionisation of the universe's neutral hydrogen.

These massive stars have very short lives ($\sim$ a million years) and many should explode as pair instability supernovae (PISN) that could be $\sim 100$ times as luminous as the usual type II core-collapse supernovae.

The problems with detecting them are: (a) They are distant, so even though very luminous, will still be extremely faint. (b) The lives of the progenitors are so short they may well be shrouded by an obscuring envelope. (c) Any rest-frame flux that is shortward of the Lyman limit at 121 nm will be absorbed. Translating this into the observer frame for $z>6$, means that any observed flux must be search for in the near-infrared or even the mid-infrared. (d) They take place on much longer timescales than type II supernovae. Their rise and fall is expected to be about 1 year in the rest-frame and therefore dilated to >7 years in the observer frame.

The above problems explain why no Pop III supernovae have been found. What you need is an instrument capable of: surveying at near- or even mid-infrared wavelengths, over a large area (so that you stand a chance of observing a supernova going off); with sufficient spatial resolution to separate point sources of emission in the distant universe; over a long period of time (years) so that you can establish that the source is transient.

None of these things are possible with the current, or even next-generation of ground-based telescopes, but there are possibilities for detection with JWST and perhaps the Nancy Grace Roman telescope. But even here it likely depends on sufficient number of massive Pop III stars existing at the bottom end of the redshift distribution mentioned above (e.g. Hartwig et al. 2018).

Not the answer you're looking for? Browse other questions tagged star supernova .

0
Average rate of supernova x number of stars
7
What's the bleeding-edge model for how Population III stars are born and evolve?
5
Have I just observed a supernova?
2
Relationship between metallicity and color? Should Pop. I stars be blue?
6
How do isolated binary compact systems survive their formational supernovae?
2
Could population III stars develop directly into population I stars?
5
When Betelgeuse goes supernova, will the explosion hit any neighboring stars?
31
Why don’t supergiants at least start to fuse nickel into even heavier elements before going supernova?
2
How can a very old star be formed among Population III stars?
1
Why is the carbon/oxygen ratio at low metallicities important to study?