Have astronomers taken into account the fact that red-shifted light from far-away stars is also very old when studying the expansion of the universe?

I am aware that Hubble discovered that the further away a galaxy is the greater its redshift. What I don't understand is how astronomers can be sure that distant objects are still moving at greater velocities than nearer objects, as the redshifts light is also much older than the light from the nearer object. In other words, the galaxies billions of light years away may be moving fast away from us billions of years ago (when the light was emitted), but how do we know they haven't slowed down or even sped up more since?

I'm aware that this question may have been asked before, but I could not understand the answers given to them.

The bottom line is that "Hubble's law" is a relationship between the (apparent) recession velocity we deduce from an observed spectrum, defined as the speed of light multiplied by the redshift, and the proper distance to a galaxy, which is the distance to the galaxy now; at this epoch of cosmological time - the distance you would get if you could stretch a ruler from here to the galaxy.

Hubble's law is approximately a straight-line relationship between apparent recession velocity and light-travel distance only in the relatively local universe where the effects you rightly point out in your question can be safely ignored.

In terms of how we know that a galaxy is "still moving" at the same rate - we don't and we have no way of measuring the proper distance (no extra long rulers!). However, that doesn't stop us testing physical laws and making predictions about what we should be seeing now, given a Hubble's law defined in terms of proper distance and a cosmological model of how the universe's expansion varies with cosmic time.

The current best model and observations suggest indeed that the expansion of the universe slowed down for about 8 billion years after the big bang and has begun to accelerate again since then. This means that rather than a straight line, a graph of velocity/redshift versus light-travel distance is a curve, whose exact shape is defined by the parameters of this model (age of the universe, how much energy and matter of various sorts, the current Hubble constant etc.).

The graph below shows how the "Hubble law" departs from a straight line at redshift $>0.2$ (or light-travel distances greater than about 3 billion light years) (graphs from Goswami et al. 2014). 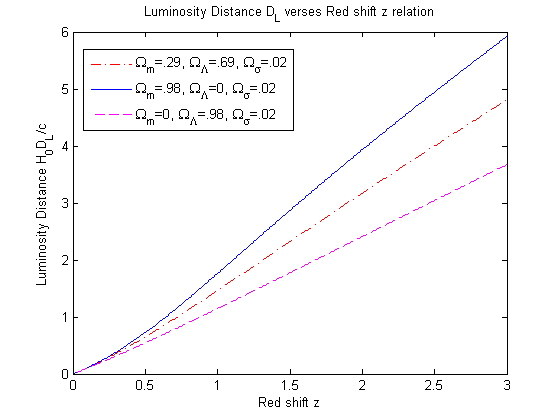 Not the answer you're looking for? Browse other questions tagged cosmological-inflation .

9
Is the Universe really expanding at an increasing rate?
1
Looking back in time by looking further away
1
Time-frame regarding cosmic expansion and the bound state of the Virgo Cluster
8
How distant were the furthest currently-observable cosmic events when their currently-observed radiation was emitted?