In 1978, Donald Kessler proposed that space pollution in orbit around the Earth could enter a collisional cascading state. This means debris would collide with satellites, generating more debris, causing more collisions, until the whole orbital regime was peppered with debris. This syndrome is referred to as Kessler Syndrome.

Kessler was inspired by modeling the evolution of our asteroid belt.

Question: Given the highly energetic and chaotic nature of our early Solar System, why weren't all the protoplanets torn apart in collisions? Are there other star systems surrounded by a debris field rather than planets due to the syndrome?

I'll get to your question shortly, but first let's talk about the asteroids. 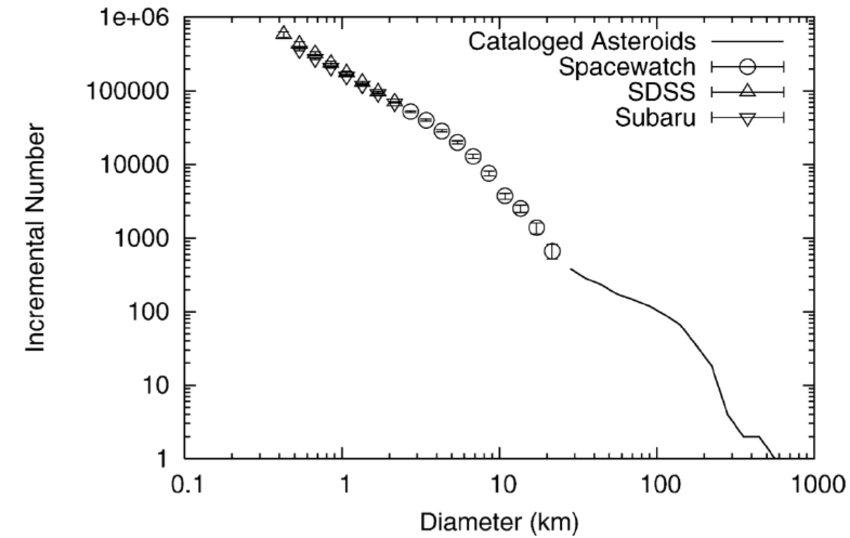 The size distribution of Main Belt asteroids, with the cumulative number larger than a given diameter plotted against diameter (km). Many different determinations of this relationship are shown, each drawing data from different sources. The larger trend emerges with two bumps, around ~5 km and ~100 km.

That curve doesn't deviate very much from the line of best fit, over the 6 orders of magnitude shown. For smaller sizes, the slope drops slightly simply because the small asteroids are harder to observe.

The power law can be explained as the equilibrium resulting from two primary processes. Firstly, when two asteroids of similar size bump into each other, they tend to either bounce off each other or both asteroids shatter into smaller pieces. Secondly, when an asteroid hits a much larger asteroid, the small one tends to accrete onto the large one. There's a brief derivation of this process, with diagrams, on Reddit.

This equilibrium calculation assumes that the self-gravity of the asteroids is negligible. It also ignores the heat generated by collisions. For large asteroids / planetesimals, the gravity is not negligible, and the conversion of kinetic energy to heat can be substantial. These factors modify how the "Kessler syndrome" process affects large bodies.

The effects of heat are complicated. It can drive off volatiles, and it can cause the body to melt, which permits the components to be sorted gravitationally, that is, the heavier elements can sink towards the centre of the planetesimal, giving it a denser core. So when a planetesimal is large enough, it literally forges itself into a tougher body, more likely to survive disruption.

I should mention that most meteorites that we've examined don't show evidence of the effects of substantial heat during their formation.

Eventually, we ended up with a bunch of planets that were able to withstand the disruptive effects of the smaller bodies. Thus when the (hypothesised) collision between the proto-Earth and Theia occured, they didn't just shatter into numerous pieces like two small rocks would. Instead, the proto-Earth partly melted (and it already had substantial internal heat of formation), and we ended up with the Earth and the Moon (and probably a relatively small amount of loose material).

Still, the modern Solar system contains a lot of small material. We have a handful of planets, a couple of dozen moons, a few hundred large asteroids, and billions (or trillions) of small rocks and pebbles. And vast numbers of dust particles.

Incidentally, not all of the Solar system dust is primordial, or created locally by the above processes. The Solar system is currently travelling through a dusty patch of the Milky Way: an interstellar dust cloud. Brian May found evidence of this in the 1970s, which he mentions in A Survey of Radial Velocities in the Zodiacal Dust Cloud. It took him a couple of decades to publish this info because he was busy being a rock star. ;) According to Dr May, at a distance of 20 AU or so (the orbital radius of Uranus), the zodiacal dust is dominated by interstellar dust, IIRC.

6
How much cosmic dust is there in the asteroid belt?
0
Could the James Webb Space Telescope be protected from meteorites?
2
Besides Luna, are there any models of how moons become spherical and round?

4
Star System Formation questions
5
Ejected planets during the early stages of the formation of the Solar System
11
What's the distinction between "planetary formation mechanisms" and "gravitational collapse"?
0
What other “planetary formation mechanisms” exist beyond “gravitational collapse”?
5
Formation of "hot Jupiters" before star ignition
3
Kuiper belt planet formation
3
What is the nature of "rock vapor" in this description of the formation of the Moon?
9
What's the expected distribution of planet masses in a given system?
0
Comet Bernardinelli-Bernstein; could it be a "planet-killer" and what could prevent it from getting close to us?