Has the small meteorite that hit Webb done a lot of damage?

I read on the web about Webb:

A tiny meteoroid struck the newly deployed James Webb Space Telescope in May, knocking one of its gold-plated mirrors out of alignment but not changing the orbiting observatory's schedule to become fully operational shortly, NASA said on Wednesday

How seriously must we take this?

Has the small meteorite that hit Webb done a lot of damage?

The TL;DR answer is an emphatic no. Details follow.

How seriously must we take this?

The TL;DR answer is an emphatic not at all, at least not for now. Details follow.

The four detected micrometeoroid impacts have done negligible damage. The article to which you linked answers the question. Quoting and commenting on quotes from the article,

Between May 23 and 25, NASA’s James Webb Space Telescope sustained an impact to one of its primary mirror segments. After initial assessments, the team found the telescope is still performing at a level that exceeds all mission requirements despite a marginally detectable effect in the data. Thorough analysis and measurements are ongoing.

A "marginally detectable effect in the data" does not amount to "lots of damage". The quote in the question that the impact knocked "one of its gold-plated mirrors out of alignment" does not appear in the NASA statement. That appears to be an interpretation of the NASA statement by Reuters.

That the telescope "is still performing at a level that exceeds all mission requirements" also does not amount to "lots of damage". The damage was minimal, and if all that it did was to knock a mirror segment out of alignment, that is completely recoverable.

Every spacecraft suffers glitches, most of which are minor but some of which are major. "Lots of damage" would correspond to a major glitch. This was not. This micrometeoroid impact was a minor glitch, and most likely a rather minor and fully recoverable glitch.

That "thorough analysis and measurements are ongoing" is not a cause for alarm. It's what spacecraft operators do when confronted with any glitch in the spacecraft, even rather minor ones.

Micrometeoroid strikes are an unavoidable aspect of operating any spacecraft, which routinely sustain many impacts over the course of long and productive science missions in space.

Below is an image showing micrometeoroid / orbital debris (MMOD) damage to the Hubble during the second Hubble repair mission in 1997. The micrometeoroid or orbital debris that caused that damage passed completely through the mirror. The primary mirror was never replaced during subsequent Hubble repair missions. Despite this damage, the Hubble has continued to deliver very high quality in the 25 years (and probably more) that followed this impact. One MMOD impact is not something to worry about. 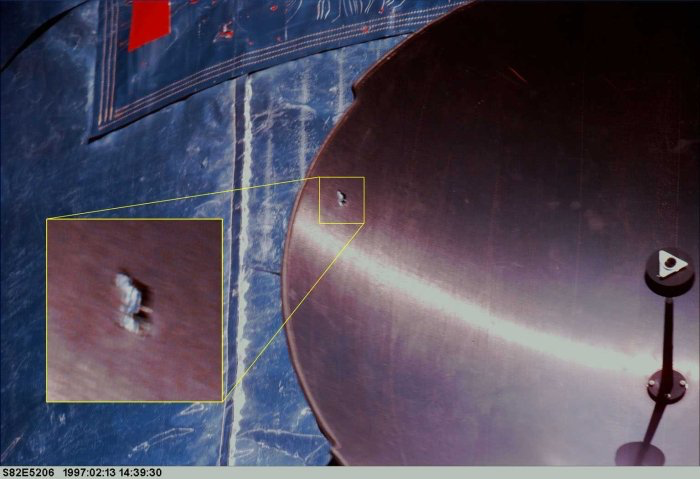 Portrayed below is an image of the radiator on the Hubble telescope's Wide Field and Planetary Camera 2 (WFPC2).

The Hubble telescope's Wide Field and Planetary Camera 2 (WFPC2) was installed in 1993 during the first Hubble repair mission. This was the camera that saved the Hubble. The WFPC2 was replaced with the Wide Field and Planetary Camera 3 (WFPC3) during the fourth Hubble repair mission because camera technology had improved immensely during the intervening 15.5 years. The WFPC2 was brought back to Earth for studies. What is shown in the photo below is the WFPC2 radiator after the numerous MMOD impacts were drilled out for study. The size of the holes greatly magnifies the magnitude of the impacts. It's the number of holes that is relevant in the image. 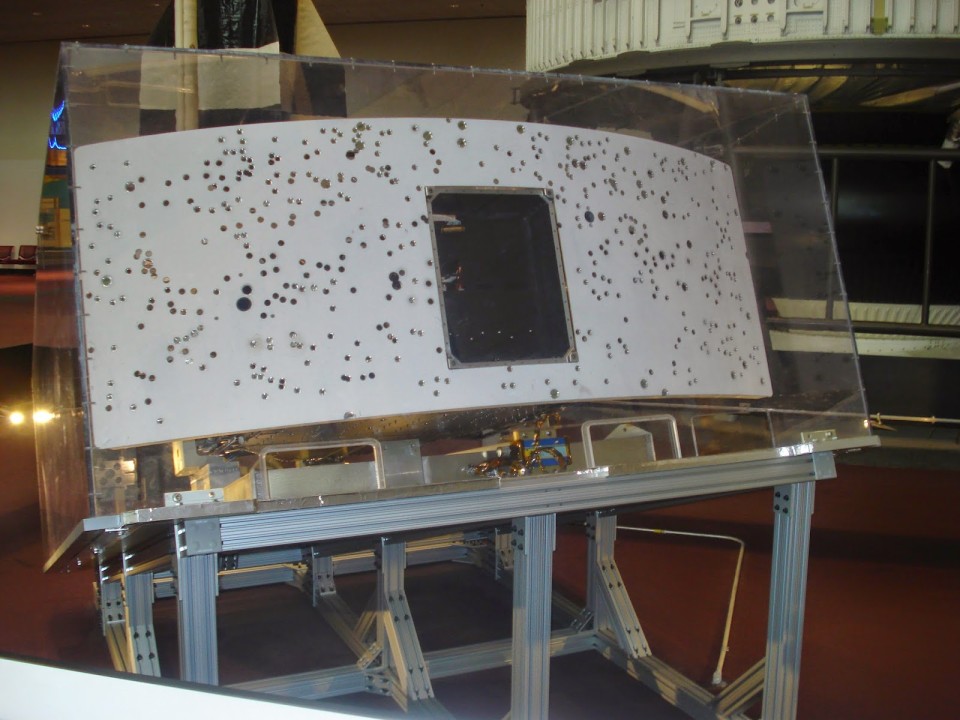 Impacts will continue to occur throughout the entirety of Webb’s lifetime in space; such events were anticipated when building and testing the mirror on the ground.

Fortunately, the JWST designers did address the MMOD problem, throughout the design, build, and test processes.

“With Webb’s mirrors exposed to space, we expected that occasional micrometeoroid impacts would gracefully degrade telescope performance over time,” said Lee Feinberg, Webb optical telescope element manager at NASA Goddard. “Since launch, we have had four smaller measurable micrometeoroid strikes that were consistent with expectations and this one more recently that is larger than our degradation predictions assumed. We will use this flight data to update our analysis of performance over time and also develop operational approaches to assure we maximize the imaging performance of Webb to the best extent possible for many years to come.”

This recent impact caused no change to Webb’s operations schedule, as the team continues to check out the science instruments’ observing modes and prepares for the release of Webb’s first images and the start of science operations.

The cumulative damage from MMOD will eventually and inevitably result in severe degradation of the telescope. This is unlikely to happen for a decade or two. Space is not easy. However, the vehicle was designed well and these first impacts caused very little damage.

Regarding the last quote, a commenter thought that this means the team is continuing to assess the impact of the micrometeoroid. That is not the case. Reiterating from the block quote, "This recent impact caused no change to Webb’s operations schedule." The JWST is not quite ready for prime time.

The image below shows very precisely what checkout procedures still needed to be done as of 8 June 2022. Each of the four instruments on the JWST has multiple modes of operation. Each of those operational modes must be checked out and signed off before the instrument is deemed to be operational. As of 8 June 2022, only 2 of the 17 instrument modes had been fully confirmed and signed off. The final commissioning checkout procedures of those remaining 15 modes is what the article was referring to. The goal is to have all of this commissioning work (and signed off) completed by 12 July 2022. This checkout has absolutely nothing to do with the micrometeoroid impacts. 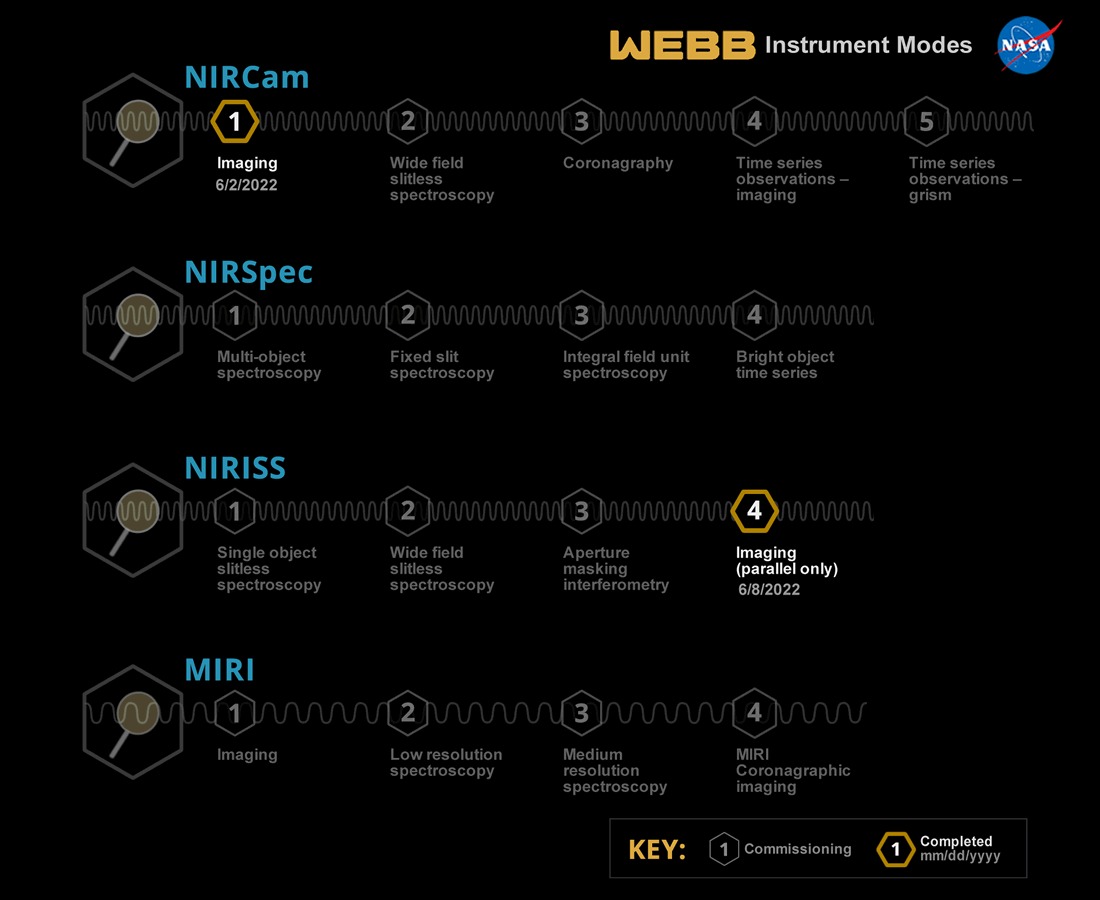 tl;dr: They really didn't expect a hit like this so soon, and according to JWST folks it

caused significant uncorrectable change in the overall figure of that segmexnt

Now imagine one of these every few months for 20 years!

Figure 3: Wavefront Sensing Measurements showing the quality of achieved mirror alignment on orbit. The telescope wavefront error achieved in flight, shown in the right panel, closely tracks the as-polished surface figures of the individual segments, as measured during ground testing years ago, shown in the left panel. JWST’s wavefront sensing and mirror control systems are working as intended, achieving optimal alignments within the ~10 nm resolution of the sensing and control system and correcting as necessary to maintain that alignment. Data from PID 1163.

Despite the "emphatic no" and "emphatic not at all, at least not for now." in @DavidHammen's answer, I think there is room to argue that there is some important significance to the event and its result, and I have a hunch that they'll likely make some prudent modifications to the observing schedule.

...Of the six micrometeoroid strikes detected thus far through wavefront sensing, five had negligible effects, contributing a combined total of < 1 nm to the overall wavefront error.

By contrast, the micrometeoroid which hit segment C3 in the period 22—24 May 2022 UT caused significant uncorrectable change in the overall figure of that segment. However, the effect was small at the full telescope level because only a small portion of the telescope area was affected. After two subsequent realignment steps, the telescope was aligned to a minimum of 59 nm rms, which is about 5-10 nm rms above the previous best wavefront error rms values7. It should be noted that the drifts and stability levels of the telescope mean that science observations will typically see telescope contribution between 60 nm rms (minimum) and 80 nm rms (where WF control will typically be performed). Further, the telescope WFE combines with the science instrument WFE to yield total observatory levels in the range 70-130 nm (see Table 2), so the slight increase to telescope WFE from this strike has a relatively smaller effect on total observatory WFE.

7The impact raised the wavefront error of segment C3 from 56 to 280 nm rms. Mirror commanding to adjust segment position and curvature reduced this error to 178 nm rms. This, after dividing by area and adding in quadrature to the other sources of WFE in the telescope, results in ~9 nm rms increase to the total telescope wavefront error.

In other words, the initial event had a significant impact on the contribution from one of the 18 mirrors. Some of that was reduced by two subsequent realignments of (at least) that segment, and the overall WFE or wavefront error for the whole mirror (all 18 segments together) only increased a little bit.

There's a heck of a lot more to telescope performance than a single number like RMS wavefront error. Some errors can be far more pathological than others, especially when they are at high spatial frequencies. This report doesn't yet touch on that.

However, having a high spatial frequency deviation in WFE can also produce specific artifacts, like changes to the pattern of the MTF (modulation transfer function) or background level of scattered light.

Imaging of the primary using the NIRCam pupil imaging lens is sensitive to changes from smaller impacts, below the threshold to be detectable by wavefront sensing. Comparison of pupil images taken 23 Feb and 26 May 2022 show evidence for 19 such minor strikes over that 92 day period. Regular monitoring of the pupil may help constrain the micrometeoroid hit rate and power spectrum.

It is not yet clear whether the May 2022 hit to segment C3 was a rare event (i.e. an unlucky early strike by a high kinetic energy micrometeoroid that statistically might occur only once in several years), or whether the telescope may be more susceptible to damage by micrometeoroids than pre-launch modeling predicted. The project team is conducting additional investigations into the micrometeoroid population, how impacts affect beryllium mirrors, and the efficacy and efficiency tradeoffs of potential mitigations such as pointing restrictions that would minimize time spent looking in the direction of orbital motion, which statistically has higher micrometeoroid rates and energies.

So the JWST folks are actually quite concerned about this. Certainly a once-in-a-century event is just as likely to happen in the first few months as it is in any few month period of the century, so this doesn't prove anything about the expected rate of these events.

But this is the first real measurement of this risk!

Until now the estimated rates and risks have been based on models and theories and some anecdotal information of impacts on other spacecraft in Sun-Earth halo orbits; these measured impacts are the first hard data for characterizing the combination of speed, direction and mass of mirror-impacting meteorites.

They really might make some changes to observing schedules at least for a while in order to keep the telescope pointed away from directions likely to be favorable for these kinds of impacts.

Not the answer you're looking for? Browse other questions tagged meteorite james-webb-space-telescope .

7
How are the occurrence and nature of micrometeoroid impacts on JWST optics identified?
0
Could the James Webb Space Telescope be protected from meteorites?

22
What is the name of meteoroids which hit Moon, Mars, or pretty much anything that isn’t the Earth?