When exactly was the last time that Earth's aphelion coincided (within 24 hours) with the northern winter (December) solstice?

I would like to know in what year precisely did Earth's aphelion coincide (within 24 hours) with the northern winter (December) solstice? From what I understand, the day (on any tropical calendar) on which Earth is at aphelion in its orbit changes over time due to axial precession. Is there a reference like an almanac where this is calculated? If not, how do we calculate this ourselves and how precise and accurate can we be?

Edit 1: I just read that maybe the calculation is more complicated because of apsidal precession but I don't really understand now...

Edit 2: My guess is that the date I'm seeking was roughly 13-14 thousand years ago since northern winter solstice was at perihelion in 1246 AD and the period of axial precession is roughly 26 thousand years (so, something kind of like (1246 AD) - (25,772/2 years) = 11641 BC. Wolfram Alpha says this is wrong though because the winter solstice would have been December 14th while the aphelion would have been November 9th. That would be quite a bit off.

Edit 3: I think I brute forced it using Wolfram Alpha although I don't know how accurate this is. It seems that the aphelion and winter solstice could have coincided on December 16th, 9510 BC (11532 BP.)

Using JPL Horizons, I found that Earth's aphelion last occurred near the northern winter solstice some time around 9540 BC.

There might be a clever way to get this info from Horizons, but I just used crude estimates and trial & error. This task is a bit tricky. To get accurate results, you need to use the Terrestrial Time (TT) scale; in that epoch, the uncertainty in the difference between Universal Time and TT is rather large.

As I mentioned here, the exact time of Earth's perihelion and aphelion is a little wobbly, mostly because of the influence of the Moon. However, the perihelion and aphelion of the Earth-Moon barycentre (EMB) are more stable, although they do get affected slightly by perturbations from the other planets (I assume Jupiter & maybe Venus are the main culprits). Fortunately, in 9542 BC, the aphelion of the EMB and of the Earth itself are fairly closely aligned. 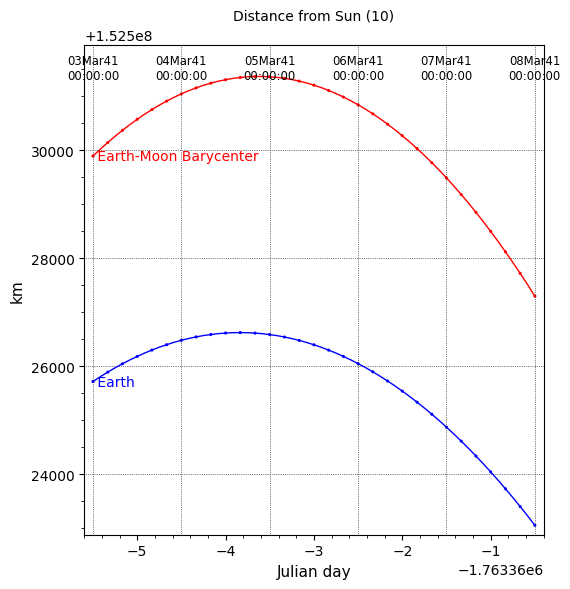 And here's the corresponding graph of the Sun's declination. 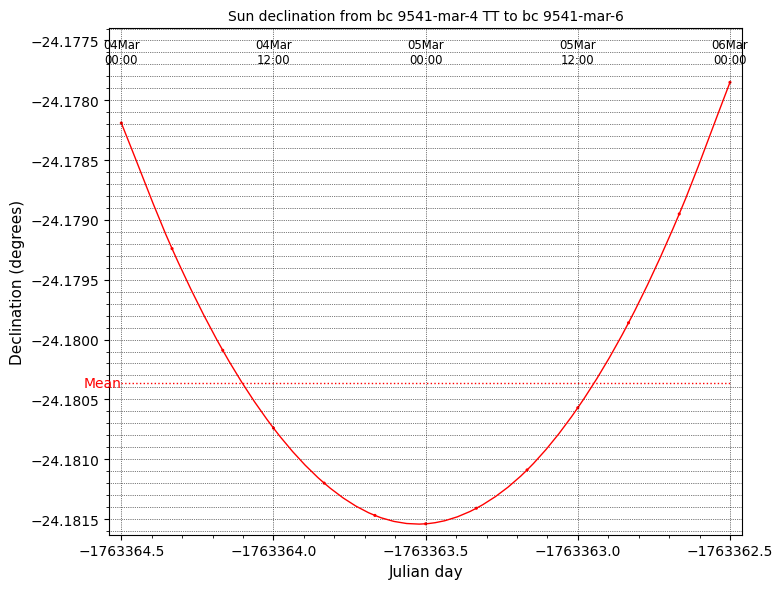 Those graphs say that aphelion and solstice occur around midnight on the 5th of March, 9541 BC, or Julian day -1763363.5. Horizons uses the Julian calendar for dates prior to 1582-Oct-15. The equivalent (proleptic) Gregorian calendar date is the 22nd of December, 9542 BC.

I just want to say a little more about the variation in the time of perihelion / aphelion. Here's a plot for the year 2000 of the distance from the Sun to the Earth and to the EMB. At this scale, the graphs overlap almost perfectly. That ±~5000 km monthly variation due to the Earth's orbit around the EMB (which you can see in a graph in my linked answer) is pretty small compared to the 5 million km difference between perihelion & aphelion. But as the top graph in this answer shows, we can see the difference if we zoom in close enough.

The year doesn't contain a whole number of synodic months, so the effect of the Earth-EMB orbit on the exact time of Earth's perihelion varies from year to year.

Here's an anim covering the years 2000 to 2019 for 30 days around perihelion. The dots are 1 day apart, but the curves were calculated using 6 hour steps. The frame step is a Julian year of 365.25 days, rather than a calendar year, to (mostly) eliminate the shift due to the leapyear cycle.

The previous version of this anim is https://i.stack.imgur.com/F86um.gif

The aphelion plot was done using a slightly updated version of the script in this answer: https://space.stackexchange.com/a/58339/38535

The perihelion plot was done using a hacked version of that script. Sorry, but it's a bit too ugly to post. ;)

Not the answer you're looking for? Browse other questions tagged orbit precession solstice .

6
How accurate is the "Equation of time" (mean time to actual solar time)? And how much can it vary from the average?
2
Orbital modelling - best choice for initial JPL Horizons data?

3
Relationship between precession and dating ancient alignments
2
Is Earth's true anomaly roughly 1 degree currently?
2
How would one figure out the rate of axial precession of a planet?
4
Is Earth's climate significantly different when the one solstice occurs at aphelion rather than the other?
6
When was the last time a great conjunction coincided with a solstice?
4
How to calculate the nodal precession range of the Moon with respect to the celestial equator?
5
Does precession flip the seasons?