Why were only 4 days of data used in the M87 EHT observation?

I wonder why only 4 days of data were used in the M87 Event Horizon Telescope (EHT) observation. What is preventing you from obtaining a more detailed and clearer image over a longer period of time?

This is a really good question in that there are good answers to it.

Alas I'm no expert, but I will get the ball rolling.

About the "only four days", this is almost certainly only the period for the data that ended up in the final image. There is probably a much larger body of observing time spent in technology development. The EHT really pushed VLBI radio Astronomy to new limits, one of which is processing the recorded data offline to discover the exact distances and orientations of each telescope dish with respect to the other to sub-millimeter accuracy. For more on that see Physics SE's Precise Event Horizon Telescope locations?

The "light" (radio waves) in the image comes from swirling, changing hot gas in the accretion disk

Now for the data contributing to the image, I can't state with certainty that this is the exact and complete answer, but it is certainly a limiting factor for exposure time.

The goal is to produce a static image, not a movie. To use interferometry to build up a clear "snapshot" requires the exposure time to be fast enough that the object doesn't blur.

The algorithms they used at the time to generate that image from that pretty sparsely populated array of telescopes, for which at any given moment a significant fraction can't see the target, assumed that the the target was static, that it didn't change. See 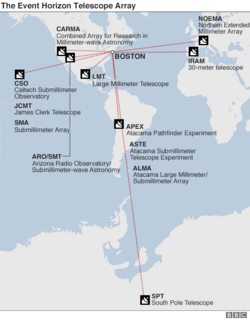 It's the same way we assume, or at least hope that our targets don't move much during our photograph exposure times of a fraction of a second, but for the EHT's image of M87* that shutter time was four days.

To my understanding that's why it was chosen as the EHT's first target, rather than SrgA*. For more on that see answers to:

Illustration of what photographing a spinning object might look like where the exposure time (shutter speed) is too long and the motion too fast: 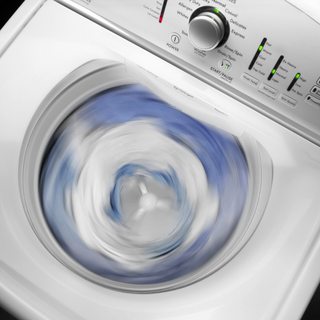 Not the answer you're looking for? Browse other questions tagged observational-astronomy supermassive-black-hole m87 .

3
Is this the best non-radio image of whatever's at the center of M87? How was it taken?
5
Event Horizon Telescope Data Cleanup
1
Why is the ring of light around the M87 black hole bigger than the photon sphere?
3
What is the actual resolution of Event Horizon Telescope?
4
Will the first Event Horizon Telescope image of the Milky Way's black hole Sgr A* just be another lumpy orange donut?
3
Have interference effects (in space) ever been observed by a single instrument, as opposed to interferometry?
4
Examples of the oldest "precoveries"; objects that were first discovered in recent data but then looking back are confirmed in much older data