In this image taken by Voyager 1, which is closer: the earth or the moon? 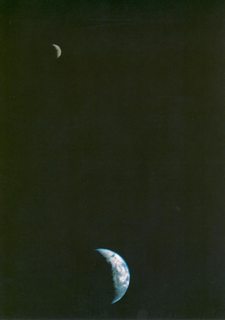 It doesn't strike me as obvious how to determine which celestial body is closer to Voyager 1 as the photo was taken. My (not very scientific) guess is that the Earth is closer, since the moon seems more out of focus. It also seems more probable, since it was launched from earth.

Question: In this image taken by Voyager 1, which is closer: the earth or the moon?

I used JPL Horizons to get the position vectors of each relative to the SSB on Sep 19, 1977.

So, the Earth is closer.

Another way to look at it is by linear measurements. Using Photoshop, and averaging three measures each of the Moon and the Earth (with the “Ruler” tool), I get 12.56 pixels for the Moon and 54.67 pixels from the Earth (both measured from “horn” to “horn”). This means the Moon’s angular size is 22.9% of the Earth’s angular size on that image.

note: this confirms @GregMiller's answer I started typing it last night and fell asleep; woke up and finished it and clicked "post" then to discovered a bunch of new answers.

For those who haven't used Horizons before perhaps this will help get you started; it's fun!

In the photo the Moon's apparent distance from the center of the Earth, projected into the plane of the photo is only about 4 Earth diameters or about 51,000 km. This is only a small fraction of their actual distance of about 360,000 to 390,000 km, so one of them is a lot closer to Voyager than the other to be seen so closely together.

In this image taken by Voyager 1, which is closer: the earth or the moon?

A: Earth is closer.

Here is how I set up Horizons to calculate:

and here part of the output from Horizons for each body:

Voyager 1 from the geocenter (Earth):

and Voyager 1 from the lunacenter (the Moon):

The Earth was closer.

I can't find the time when that picture was taken. That NASA press release is dated Sep 19, 1977, but the consensus seems to be that the photo was taken around the 18th of September. 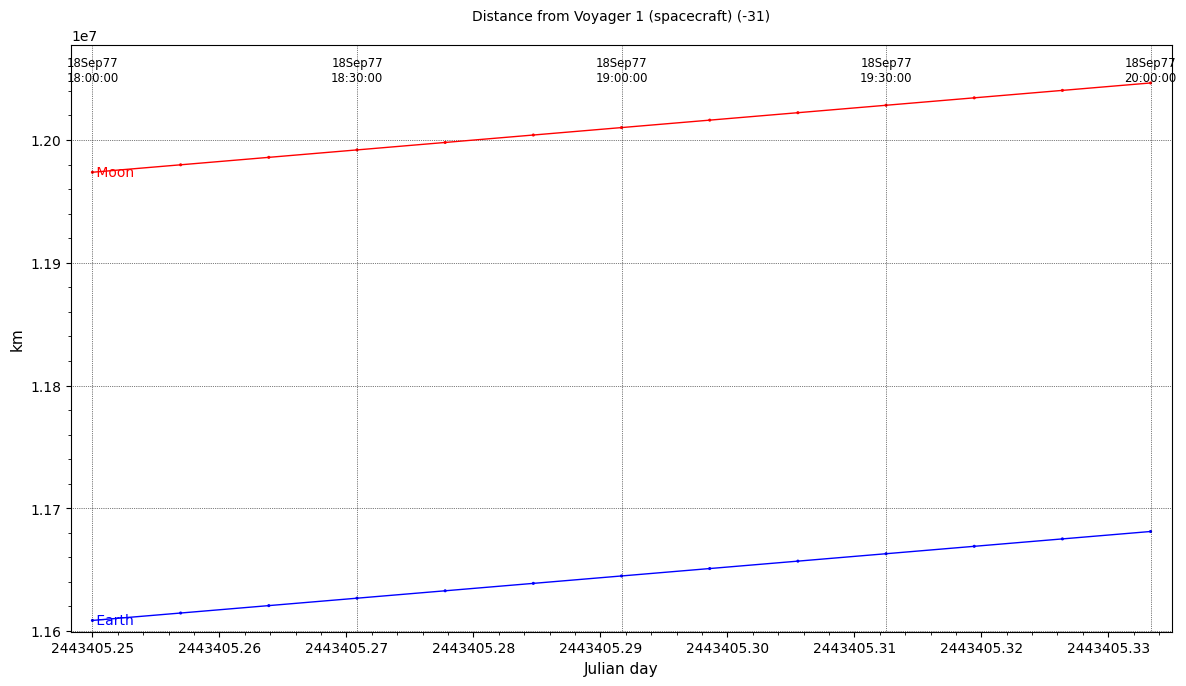 FWIW, here's a plot for September, starting about 10 hours after launch. 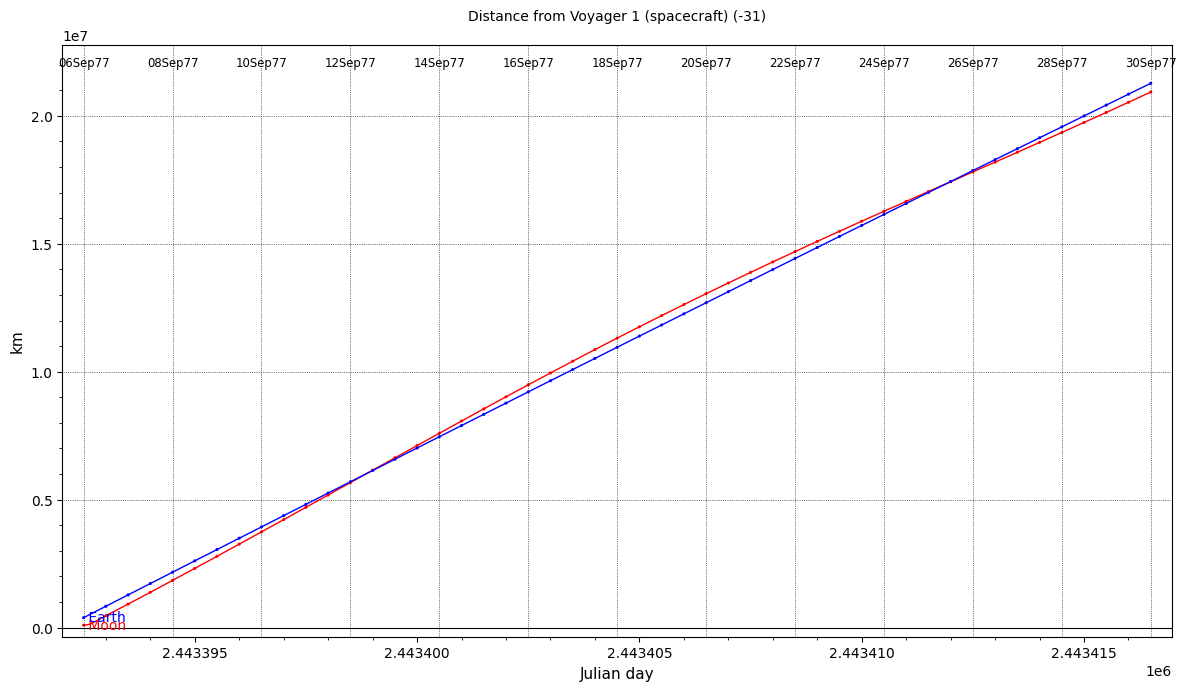 So Voyager 1 was equidistant from the Earth & Moon some time around the 12th and the 26th.

Here's a plot of the trajectories of the Moon (orange) and Voyager 1 (green) relative to the Earth (blue) over that time interval, with a time step of 1 day. Hopefully, this plot makes it clear that Voyager was closer to the Earth than to the Moon during that interval.

The frame is the ICRF, essentially the J2000.0 frame. The XY plane is (parallel to) the J2000 ecliptic, and the grey line emanating from the Earth is parallel to the ICRF X axis, and points towards the J2000 First Point of Aries (the March equinox point). We're looking "down" from north of the ecliptic. The Moon is moving anticlockwise. Voyager is moving at quite a speed, so in one day it traverses a distance equal to the diameter of the Moon's orbit. It's above the ecliptic, moving north.

You can see an interactive 3D view in this orbit plotting script.

That script can be used to create trajectory plots of any number of bodies that Horizons knows about. Any major body can be the center, and some minor bodies can be too. Use the SSD Small-Body Database Lookup tool to get the official name or SPKID for small bodies. Major body SPKIDs can be found here. Please see the Horizons manual for further info, including info on specifying dates and time steps.

Separate body names / ids and palette colours with commas. You can give more colours than bodies, if you don't supply a colour for a body it will not be plotted.

To disable the plotting of labels, set label_step to 0.

If you select the perspective plotting mode you may need to increase the dot size value considerably.

The program maintains a cache of its last 20 queries of Horizons data, so if you only change "cosmetic" options the plot can be generated without re-fetching the data from Horizons.

Here are the 3D interface controls.

Here's an enhanced version of that script, which allows you to select the orientation of the XY plane. The default is Ecliptic, the other options are Frame for the J2000 Earth equatorial plane, or Body Equator, for the equatorial plane of the central body. In all cases, the actual plane plotted is the plane parallel to the selected plane which passes through the center body.

I set the defaults to show Uranus and a few of its moons, since the Uranus equatorial plane is quite tilted relative to the ecliptic and to Earth's equator.

Here is my answer, which I think involes the easiest possible method of getting a rough answer.

So the Earth appears to have about 5 times the apparent diameter as the Moon.

So the Earth is closer than the Moon in the photo.

The quesiton doesn't ask for how much closer, and I won't botther calculating. No doubt a better image of the photo would enable a more accurate ratio between the apparent diameters of the Earth and the Moon to be measured, thus makng a more accurate calculation possible.

The Earth is a bit closer than the Moon in this picture. From the illumination pattern on the Earth and Moon, we can see that the Sun is off to the right. And the Moon’s orbit around the Earth is tilted only slightly (about 5 degrees) compared to the Earth’s orbit around the Sun. Thus, the Moon must be on the farther side of its orbit (farther from Voyager 1 than Earth is) to give the observed perspective.

16
How does the earth cast straight and reversed shadows on the moon?
6
Is this scaling of JWST halo reasonably correct
5
How can you usefully determine the dimensions of the perseides meteor shower band earth passes through?
1
orbit viewer for any date for moon

3
Conundrum involving distance to object, universal expansion, age of universe, etc
7
Are there stars in the first photo from space?
0
How accurately can you tell the time using a photo of the stars?
3
Is this the best non-radio image of whatever's at the center of M87? How was it taken?
4
Distance to Proxima Centauri (Gaia VS New Horizons parallax program)
2
How to calculate local position, knowing the RA and Dec of the center of an image, RPY of the camera, and precise time?
1
Before the 1761 transit, what was our best estimate of the distance to the Sun?
0
What is the actual center of galaxy in this image
1
How far above the galactic plane would a telescope array need to be in order to image the whole galaxy?