It is often stated that, "Planetary aberration is a combined result of the observer's motion and the time taken for light to travel from a body in the Solar System to the observer". I am not aware of any authoritative reference to the origin of this statement; does anybody know?

Also, does this statement imply that the observed planetary aberration will be proportional to some power of the distance between the observer and the planet? However, (as we know) as the planet is further away from the sun, the orbital velocity of the planet decreases. Are there any reported measurements on aberration for any planets?

I have posted this question in Physics Stackexchange as well, as this post is about an inter-disciplinary topic.

(1) in 'ESAE', the "Explanatory Supplement to The Astronomical Ephemeris and the American Ephemeris and Nautical Almanac" (HMSO, 1961, with reprints to 1977),

(2) in 'ESAA', the "Explanatory Supplement to The Astronomical Almanac" (ed. P K Seidelmann), and also

ABERRATION : Because the velocity of light is finite, the apparent direction of a moving celestial object from a moving observer is not the same as the geometric direction of the object from the observer at the same instant. This displacement of the apparent position from the geometric position may be attributed in part to the motion of the object, and in part to the motion of the observer, these motions being referred to an inertial frame of reference. The former part, independent of the motion of the observer, may be considered to be a correction for light-time; the latter part, independent of the motion or distance of the object, is referred to as stellar aberration, since for the stars the correction for light-time is, of necessity, ignored. The sum of the two parts is called planetary aberration since it is applicable to planets and other members of the solar system.

This passage contains essentially the same content as the summary quoted in the question, and provides the authoritative source requested.

The same page (ESAE p.46) goes on to give the details below. (The original diagram had handwritten markings, clarified in the attached version and with direction arrows in the following text, also with a few explanatory words in curly brackets {}.) 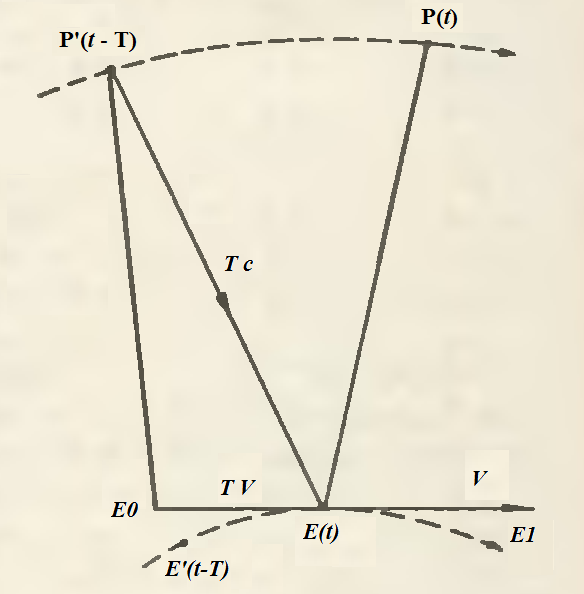 Planetary motions relative to the earth show stationary points and retrogradations. Thus there is no direct relation between planetary geocentric distance and the aberration, nor between planetary heliocentric motion or distance and the aberration. The more distant solar-system objects are indeed generally slower in motion, tending towards smaller aberrations, but their greater distances from the earth also mean longer light-time intervals, tending to counter that effect, and again that is further complicated by the motions of retrogradation.

IV. Computations for the aberration are given in ESAE (sec. 2D, p.46 onwards) and (with updated constants) in ESAA (sec. 3.25-.257, p.127 onwards). The 'stellar' component of the aberration is more descriptively called the annual aberration, and there is also a small diurnal aberration due to the eastwards rotational motion of any (non-polar) observer on the earth's surface. The scale factor $V/c$ for the aberrational displacement angle that emerges from the description above is a first-order approximation: higher powers of $V/c$ are also present (as briefly explained in ESAE p.46-7, and ESAA p.128-9). The second order term in the classical account of the aberration has an amplitude of about 0".001. The classical physics account and the relativistic account agree at the first power of $V/c$ but differ at higher powers, the relativistic second-order term is half the size of its classical counterpart, i.e. less than 0".001.

V. The question also asks "Are there any reported measurements on aberration for any planets?" I have not found any recent direct experimental measurement work on the aberration. The reality of the phenomenon of aberration, and the fundamentals of its theory, have been confirmed and accepted for nearly 300 years since demonstration in the work of Bradley (1728) already cited. Jean-Baptist Joseph Delambre (1749-1822), astronomer and historian, wrote enthusiastically in his History of 18th-century astronomy (publ.1827) at p.420 (translation from French):

"It is to these two discoveries by Bradley {i.e.aberration and later the nutation} that we owe the exactness of modern astronomy." {Without their help it would have been impossible to reconcile various star observations to better than about a minute of arc.} "This double service assures for its author the most distinguished place among astronomers, after Hipparchus and Kepler but above all the other greatest astronomers of all ages and all countries."

In practice, the main remaining subjects for investigation or refinement have been the constant of the aberration, and the theories of the earth's motion and velocity (as well as the planetary theories) which enter into the calculation of aberrations for particular objects, dates and times.

Nowadays, the highest accuracy in the relevant astronomical measurements comes from modern determinations of the speed of light and of the astronomical unit, from ranging observations to spacecraft, from laser- and radar-ranging to some of the celestial bodies, and from their least-squares compilation into integrated solar-system ephemerides and the associated constants also fitted with them to the data. Among the resulting sources are notably the DE series of planetary and lunar ephemerides from the Jet Propulsion Laboratory (used since 1984 in the Astronomical Almanac, references given in section L of each year's issue), and the more recent INPOP series of integrated ephemerides from the Paris Observatory. ESAA sec.3-253 gives a derivation for $\kappa$, the constant of aberration that comes ultimately from these integrated ephemeris sources.

In the centuries before the 1960s, when optical techniques were still the source of highest-precision astronomical observations, the constant of aberration was investigated as a separate natural constant.

19th-c. methods of doing that are described for example in F Brunnow's 'Spherical Astronomy' (1865). It gives (p.231 onwards) some then-current methods of determining constants such as the constant of aberration. (The main problem was in choosing observations from which the desired small angular quantity would be given in as large a measure as could be arrranged. The text explains how observations of the Pole Star at the prime vertical were chosen as most promising from that point of view.)

The next main essential for the aberration is the earth's velocity vector, and an example of attempts to make this accurately accessible using techniques and data other than those from integrated ephemerides is given in Ron & Vondrak (1986) paper on the trigonometric series expansion of the annual component of the aberration based on recent theory-data about the earth's motion from P Bretagnon and others.

These items show how the aberration is nowadays recognized to depend on ingredient quantities that have wider and independent significances, so that it is no longer really a subject of independent investigation.

As far as an authoritative source, as PM 2Ring pointed out in his comment, it is on Wikipedia, but no reference is cited. The definition itself seems to be incomplete, as it does little to actually help the reader understand the components involved, it seems to be an extract from a larger discussion on the topic. A very similar definition does appear on the Oxford Reference but has quite a bit more to it than just what's in the original post.

The apparent angular displacement of the observed position of a solar system body from its instantaneous geometric direction as would be seen by an observer at the geocenter. This displacement is produced by the combination of aberration of light and light-time displacement.

In other words, it is the combined effects to two distinctly different effects:

Light Time Displacement: This is due to the fact that light from an object takes time to reach the observer. So, when a photon reaches the observer, they see it in the position it was in when that photon left the object in question. This is corrected for by computing the distance between the observer and the target, then recomputing the position of the target based on where it was based on how long it takes light to travel from the target to the observer. This process is iterated until the desired accuracy is reached. (e.g. The NOVAS library iterates up to 10 times, or until the difference between iterrations is less than 1e-9AU).

Aberration of Light: This is also usually divided into two components called annual aberation, caused by the Earth's motion around the Sun, and diurnal aberration, caused by the observer's motion around the Geocenter. The process is divided into two components because it is common to ignore diurnal aberration since it accounts for at most about .3 arcseconds. When computing both, the velocity of the observer's topocentric position is simply added to the Earth's velocity around the solar system barycenter, and the computation continues the same either way.

Here is an example implementation of annual aberration of light from VSOP87-Multilang. The equations are given in the cited paper which is publicly available at the given URL.

5
Is remote measurement of isotope ratios possible, or must a sample be aquired
0
Frequency of transit in planar and non-planar planetary systems
2
Stellar parallax
2
How to calculate the stellar visibility?
4
Precision in the measurement of the distance to the Sun
5
Stellar Aberration and Lorentz Transformation
19
Why can space telescopes see through a planetary nebula?
1
Do relativistically measured rotation speeds (Special Relativity) change planetary mass slightly through Lorentz transformation?
1
Can I use an achromatic focal reducer to reduce chromatic aberration?