What is this object visible in the Chandra image of the Cartwheel galaxy that isn't visible in JWST image?

I guess what we are seeing is something which is emitting a lot of X-rays, but not a lot of infrared? Does this tell us anything interesting in particular? 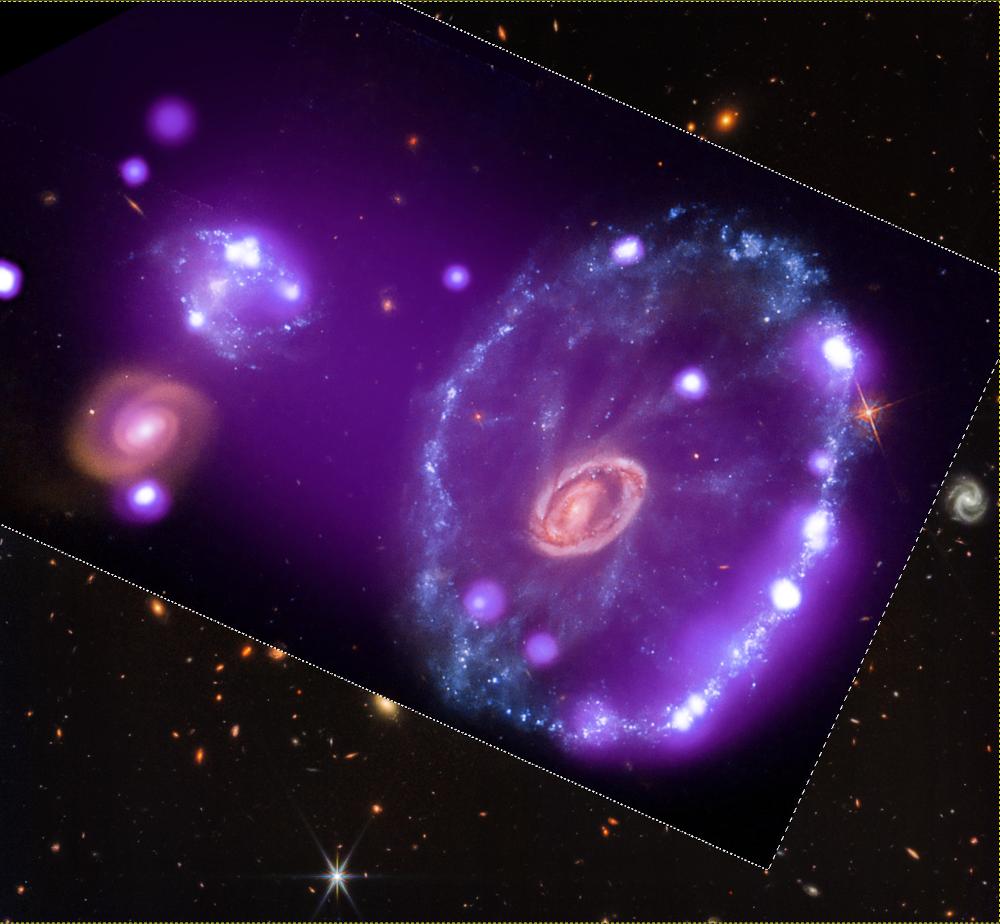 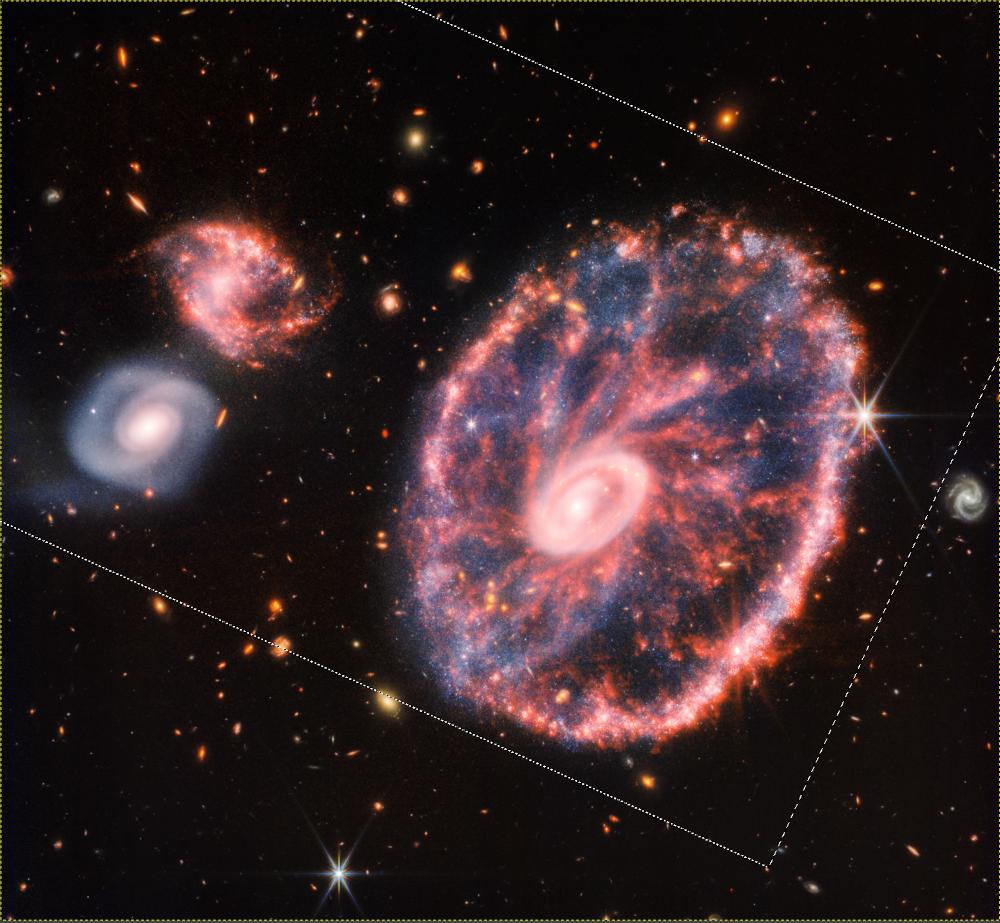 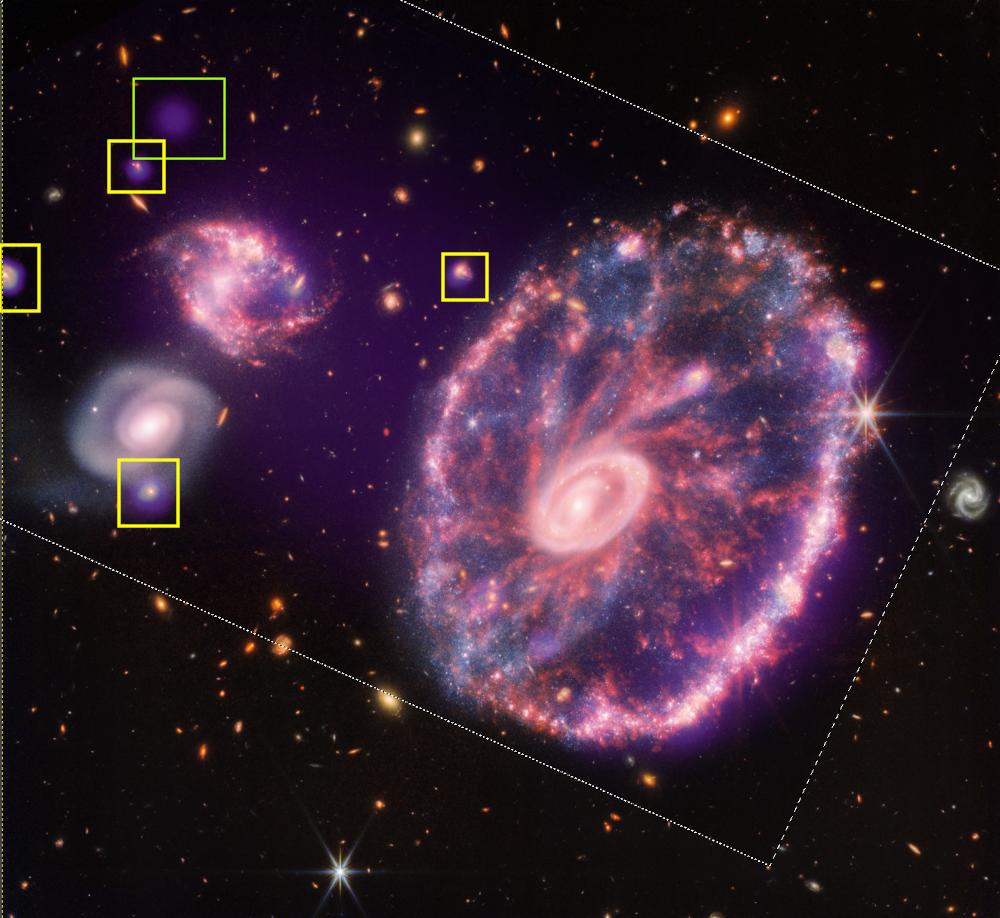 I did a SIMBAD search around the coordinates of the Cartwheel Galaxy and found multiple X-ray sources, reported in Gao et al. (2003) and Wolter & Trinchieri (2004):

The ones you've boxed are likely background active galactic nuclei (AGN); supermassive black holes accreting gas which is then heated to $\sim 10^6\,\mathrm{K}$, thereby emitting X-rays. The one in the green box indeed doesn't have any optical/infrared counterpart; it is listed in both references as "J003743.1-334142/3" (referring to the coordinates), but not discussed. With an X-ray count rate of 0.23 ± 0.07 per kilosecond, it's not very bright. It could perhaps be a particular dusty AGN, but I don't know.

But you also see several X-ray sources along the "rim" of the Cartwheel. Those might be X-ray binaries: Binary stellar systems where one companion is a compact stellar remnant — a neutron star or a black hole — accreting mass from the other companion. A large fraction of the mass energy of the accreted gas is released as X-rays.

The Cartwheel Galaxy has its peculiar shape from a relatively recent drive-by of a galaxy 3 arcminutes northeast of this field of view (usually called "G3"). This event has initiated star formation which has lit up the rim and spawned massive stars, consistent with the presence of several X-ray binaries.

Not the answer you're looking for? Browse other questions tagged observational-astronomy galaxy james-webb-space-telescope chandra .

16
What is the object in this photo?
4
What is the farthest blueshifted object to our galaxy?
3
What is the fraction of the time that the JWST could view a short transient event on-demand as a function of position on the celestial sphere?
3
What exactly is the risk to any JWST instrumentation when looking at objects that are "too bright"?
2
What is the maximum magnitude that the JWST can safely observe?
11
How exactly did JWST take a "selfie" of its own primary mirror, and what is the real purpose of this capability?
34
Why does the alignment evaluation image from JWST look like this?
10
What are the black spots/blobs in JWST Jupiter's images?
0
What percentage of visible stars will JWST be able to survey over the next 10 years?