Counting from the 21st century forward, what place on Earth will be last to experience a total solar eclipse?

All coordinates on Earth are equally likely to experience a solar eclipse, so it's just a matter of luck where the Moon's shadow happens to fall. But some place has to draw the short straw and be the last in line to experience a total solar eclipse. My question is: where is that place exactly?

The Five Millennium Canon of Solar Eclipses lists all solar eclipses (of any kind) occuring from the years -1999 to +3000. Yes, there's bound to be some inaccuracies, but this is NASA data and you're not particularly gonna get better than that.

Using that data, I'm sure someone smarter than me could gradually highlight all the total eclipses' umbral shadow paths until all but one spot on Earth's surface is covered. Maybe there's a better way to reach the result, but I think I got my point across.

P.S: There is the possibility that even after all the total eclipses from 2000 to 3000, multiple random places would still be uncovered. In which case I think starting from an earlier point would be wise.

Edit: I feel the need to clarify my question a bit. I am not asking about the last solar eclipse that will happen due to the Moon receding from the Earth.

Imagine you had a world map in front of you, and you accurately highlighted the path of totality of every total solar eclipse one by one starting from a certain date. Gradually, almost all the map would be filled as more and more eclipses cover more ground until only a few spots remain. My question is, where are these few unlucky spots that don't get to experience a total solar eclipse?

The starting point doesn't necessarily have to be the beginning of the 21st century. The data I linked covers all eclipses from the years -1999 to +3000. That is 5 millennia worth of eclipses.

After all these millennia have passed, which spots, if any, will remain uncovered on the world map and never experience a total solar eclipse during that time frame?

Here is a combination of the maps available from NASA SEAtlas. They cover time span from year 2001 to 3000. Made with a custom Python script and some editing in GIMP. 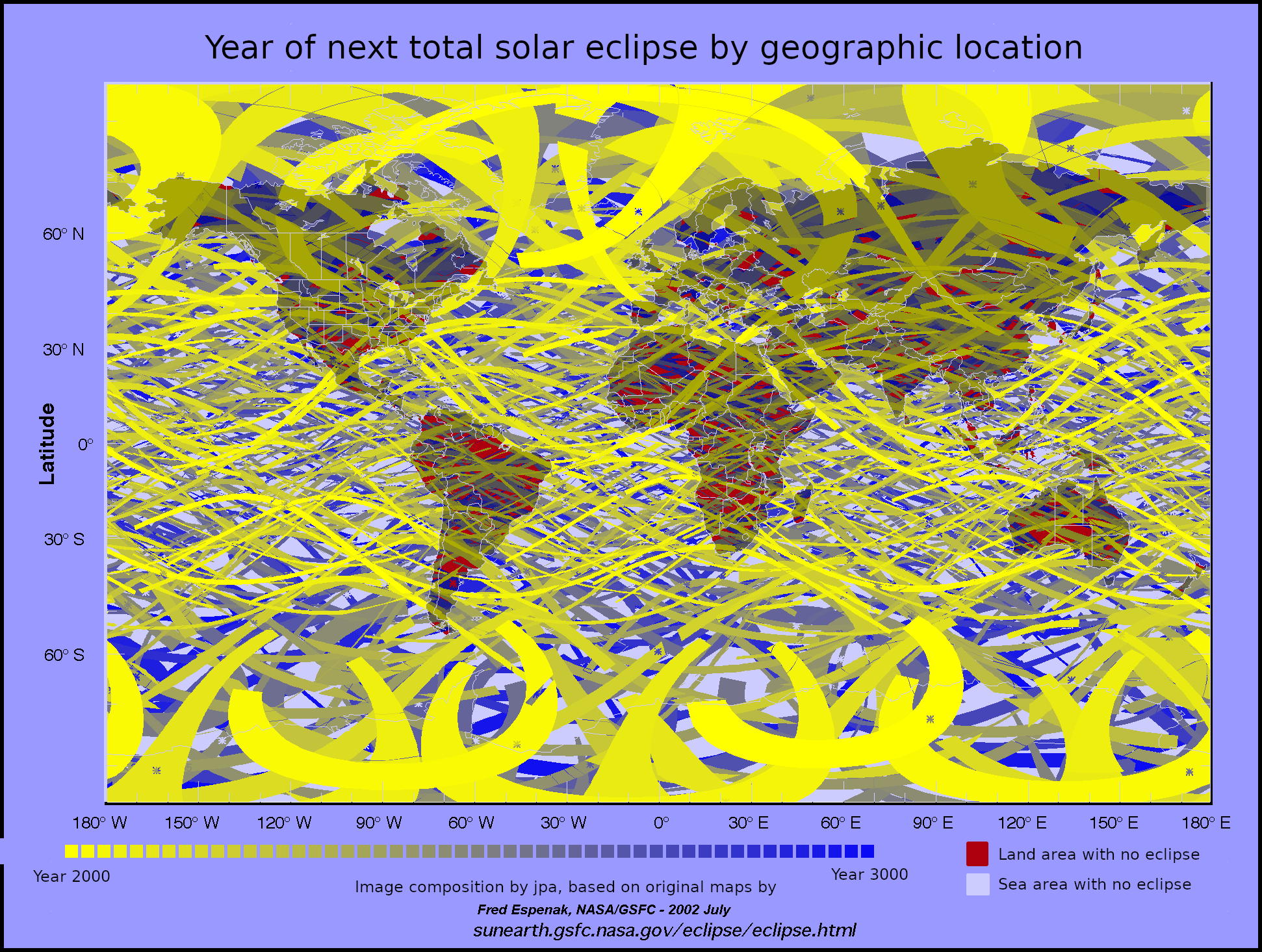 The yellow to blue colors mark the time of the next total solar eclipse by location. A red or light blue color marks the areas that do not experience a total eclipse by year 3000.

There are many such areas without eclipse, so based on this data it is not possible to say which will be the last one. There is no clear pattern so it is likely that computational accuracy and the definition of total vs. annular vs. 99% eclipse would affect the answer also.

Here is a map on the number of total eclipses per area in the whole 5000 year dataset: 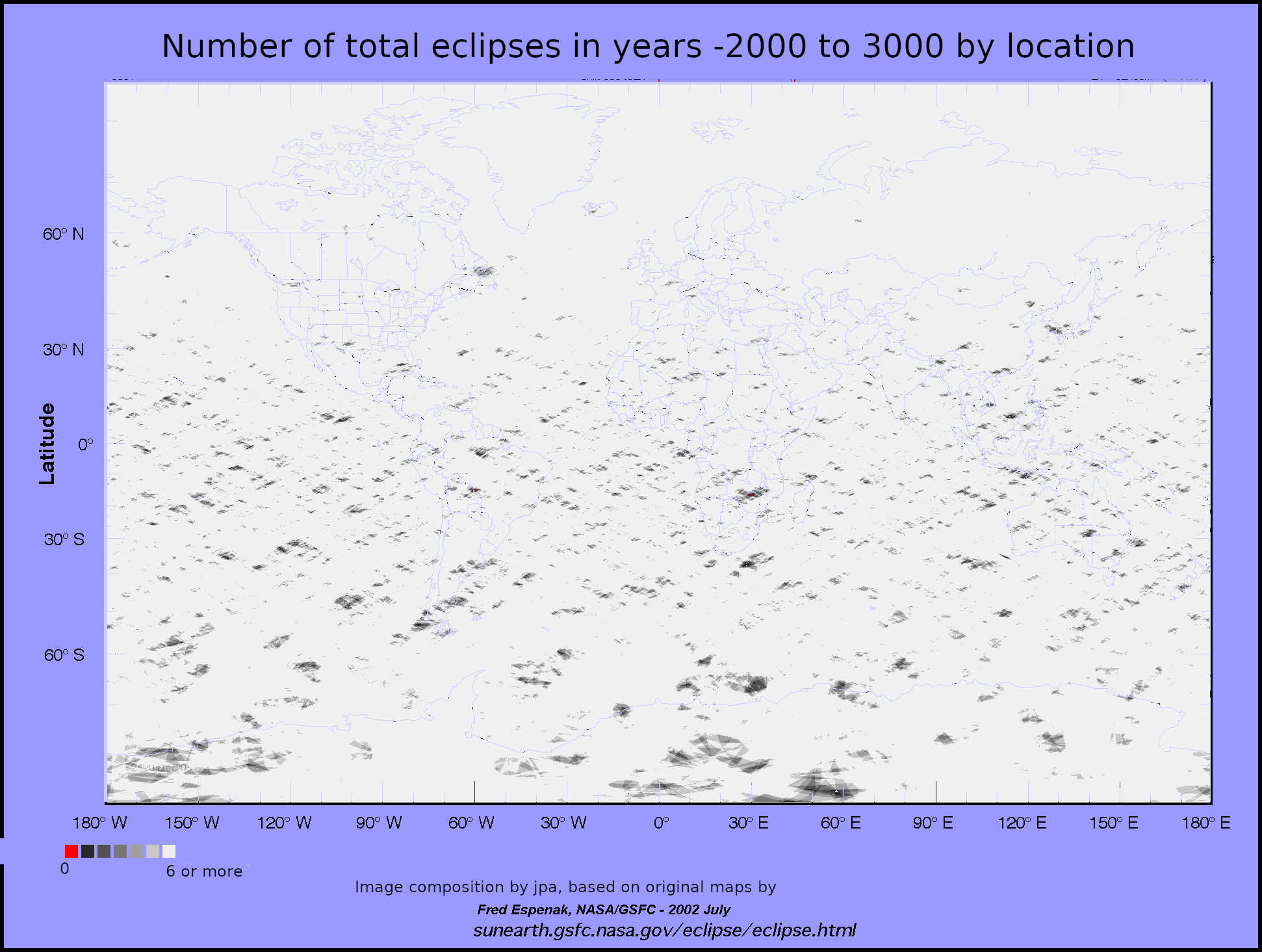 There are three tiny areas with no eclipses. One is near the border of Brazil and Bolivia, one in north Zimbabwe and one in south Kongo. I have hilighted them in red.

For some reason the southern hemisphere seems to have less total eclipses on average. An explanation may be in this answer.

Short answer is that no one knows, there's too much margin for error.

There is too much margin for error, just in the Earth's rotation. The Earth does not rotate at a constant rate, partly due to the Moon's affects on Earth. These variations are quite unpredictable and even the Five Millennium Canon of Solar Eclipses has a link to challenges with delta T.

Just in the past 50 years, there have been 27 Leap Seconds added, and at unpredictable intervals. Since the Earth's orientation can't be predicted accurately, instead, the IERS publishes daily bulletins of the Earth Orientation Parameters based on actual observations, and predicts leap seconds just 6 months in advance.

This article cites Jean Meeus' (one of the FMCSE authors) book where he states the last solar eclipse will be in about 1.2 billion years. But, reading the book, he uses a lot of averages and even he states it's doubtful the recession rate he used for the Moon would stay constant. So the error margin, just in when the last solar eclipse will happen, is likely hundreds of millions of years off.

The length of a day is 86,400 seconds. We currently can't predict the Earth's rotation to better than 1 second even a few years in advance, but if we were to assume we could do it out to infinity with an error margin of just on in every 10 years, the error margin would be one full rotation of the Earth in just 864,000 years.

So, not knowing when the last Solar Eclipse will be to within just 1M years would make it a total crap shoot. And the reality is we don't know even within 100M years, nor can we predict changes in Earth's rotation even a few years in advance.

Meeus also has a book on Solar Eclipses (currently unavailable, but should be available within the next month at shopatsky). If you look at the data page of an eclipse in the FMCSE, you'll see he provides a $ \Delta T$ estimate that was used to produce the catalog. In the book he shows how to apply an updated $\Delta T$ to produce more accurate results as it gets closer to eclipse time.