The reason for Earth's tilt is still not yet really proven, but scientists at Princeton stated on August 25, 2006 that planet Earth may have 'tilted' to keep its balance. Quote:

By analyzing the magnetic composition of ancient sediments found in the remote Norwegian archipelago of Svalbard, Princeton University's Adam Maloof has lent credence to a 140-year-old theory regarding the way the Earth might restore its own balance if an unequal distribution of weight ever developed in its interior or on its surface.

The theory, known as true polar wander, postulates that if an object of sufficient weight -- such as a supersized volcano -- ever formed far from the equator, the force of the planet's rotation would gradually pull the heavy object away from the axis the Earth spins around. If the volcanoes, land and other masses that exist within the spinning Earth ever became sufficiently imbalanced, the planet would tilt and rotate itself until this extra weight was relocated to a point along the equator.

Same goes for the lack of proof about the exact consequences on the planet or if it'll happen again. All that is still being researched and debated, but those Princeton scientists have thrown in some interesting perspectives which you'll discover when you visit the link I provided and completely read what they wrote.

And - last but not least - as for your question how they know where 0 degrees would be, you just have to look at the Earth's rotation around the sun. Take a 90° angle of the planet's orbit and you know where 0° would be. But I guess a picture explains more than a thousand words, so I quickly created the following graphic: 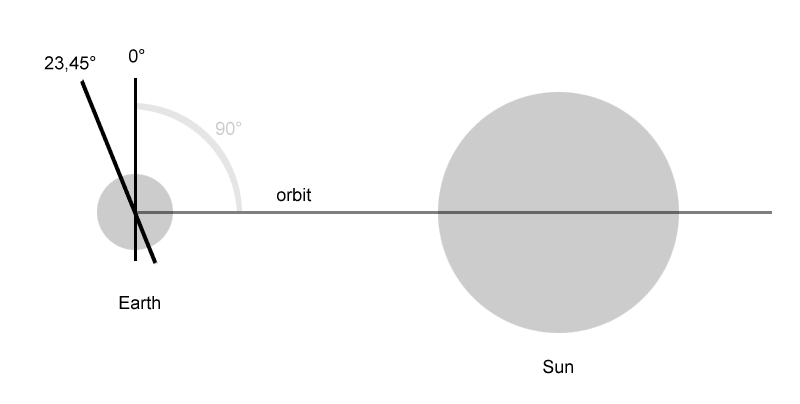 The tilt of the rotation axis of the Earth is probably twofold. First, it is probably due to Earth formation history. Even though, by angular momentum conservation, planets should have a rotation axis aligned with that of the Sun, their formation history, characterized by accretion and collision of planetisimals, should have perturbated the initial axis. Second, it is due to gravitational perturbations. And actually, regarding this effects, Earth axis should be much more tilted; hopefully, the Moon is there to help.

Not the answer you're looking for? Browse other questions tagged earth rotation .

20
Why does the Moon stablize Earth's axis?

14
Would an exoplanet without axial tilt have no seasons?
19
Is Earth's orbital eccentricity enough to cause even minor seasons, without axial tilt?
6
Is axial tilt critical for life?
6
Ambiguity in Earth's "Tilt"
2
What would happen if the Sun, Moon and Earth were isolated?