How many planets are there in this solar system?

So, in school (that's a long time age) they have been teaching us there are 9 planets in our solar system.

But every now and then I keep reading stories about another "dwarf planet" (Eris, discovered in 2005) that - depending on what source tells the story - is another planet according to the astronomical definition, while other sources say that it isn't a planet. Some even say Pluto isn't a planet anymore either.

The result: I'm confused due to the contradicting stories. Even Wikipedia isn't clear about Eris and only writes (emphasis mine):

NASA initially described it as the Solar System's tenth planet.

Trying to get a definite, official, and astronomically correct answer I can actually rely on, I'm therefore asking: How many planets are there in this solar system?

The "Definition of planet" at Wikipedia doesn't really help either, as it states:

Many astronomers, claiming that the definition of planet was of little scientific importance, preferred to recognize Pluto's historical identity as a planet by "grandfathering" it into the planet list.*

* Dr. Bonnie Buratti (2005), "Topic — First Mission to Pluto and the Kuiper Belt; "From Darkness to Light: The Exploration of the Planet Pluto"", Jet Propulsion Laboratory. Retrieved 2007-02-22.

So, if you link somewhere to provide proof, it would be great if you could point me to a more trusted source than Wikipedia. Ideally, an astronomical trusted source and/or paper.

Since we're talking about terminology, we need to remember that none of this really matters, outside of clarity when communicating. Still, some people tend to have rather strong opinions on it, thus confusion about how many planets are really in the solar system arises.

The most trusted source in Astronomy would have to be the people that set the generally accepted rules. The IAU (International Astronomical Union) has been in existence since 1919 and is comprised of 10814 Individual Members in 93 different countries worldwide. Of those countries, 73 are National Members.

The key activity of the IAU is the organization of scientific meetings. Every year the IAU sponsors nine international IAU Symposia. The IAU Symposium Proceedings series is the flagship of the IAU publications. Every three years the IAU holds a General Assembly, which offers six IAU Symposia, some 25 Joint Discussions and Special Sessions, and individual business and scientific meetings of Divisions, Commissions, and Working Groups. The proceedings of Joint Discussions and Special Sessions are published in the Highlights of Astronomy series. The reports of the GA business meetings are published in the Transactions of the IAU - B series.

With this in mind, the group decided on Pluto's fate. From page 2 of this official resolution document:

Pluto is a "dwarf planet" by the above definition and is recognized as the prototype of a new category of Trans-Neptunian Objects.

The reason given in the FAQ on this page:

Q: Why is Pluto now called a dwarf planet?

A: Pluto now falls into the dwarf planet category on account of its size and the fact that it resides within a zone of other similarly-sized objects known as the transneptunian region.

Basically, they decided that it isn't officially a planet anymore because it didn't match criteria (c): has cleared the neighbourhood around its orbit. It hasn't done this, because it 'resides within a zone of other similarly-sized objects'. Therefore, it hasn't cleared its neighborhood.

Soo... what about the number of planets?

Q: Based on this new definition, how many planets are there in our Solar System?

But that's if you don't count Dwarf planets - if you do count them, you end up with five more:

So there are 8 planets in the solar system if you don't count Dwarfs, 13 if you do.

In addition to Undo's fine answer, I would like to explain a bit about the motivation behind the definition.

When Eris was discovered, it turned out to be really, really similar to Pluto. This posed a bit of a quandary: should Eris be accepted as a new planet? Should it not? If not, then why keep Pluto? Most importantly, this pushed to the foreground the question

what, exactly, is a planet, anyway?

This had been ignored until then because everyone "knew" which bodies were planets and which ones were not. However, with the discovery of Eris, and the newly-realized potential of more such bodies turning up, this was no longer really an option, and some sort of hard definition had to be agreed upon.

The problem with coming up with a hard definition that decides what does make it to planethood and what doesn't is that nature very rarely presents us with clear, definite lines. Size, for example, is not a good discriminant, because solar system bodies come in a continuum of sizes from Jupiter down to meter-long asteroids. Where does one draw the line there? Any such size would be completely arbitrary.

There is, however, one characteristic that has a sharp distinction between some "planets" and some "non-planets", and it is the amount of other stuff in roughly the same orbit. This is still slightly arbitrary, because it's hard to put in numbers exactly what "roughly" means in this context, but it's more or less unambiguous.

Consider, then a quantity called the "planetary discriminant" µ, equal to the ratio of the planet's mass to the total mass of other bodies that cross its orbital radius and have non-resonant periods (so e.g. Neptune doesn't count as sharing Pluto's orbit) up to a factor of 10 longer or shorter (to rule out comets, which has little effect in practice). This is still a bit arbitrary (why 10?) but it's otherwise quite an objective quantity.

Now take this quantity and calculate it for the different bodies you might call planets, comparing it to both the objects' mass, 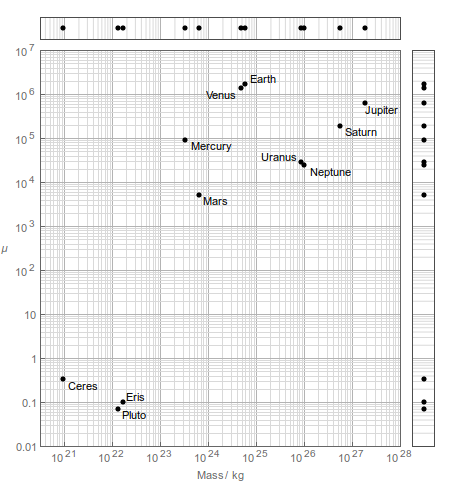 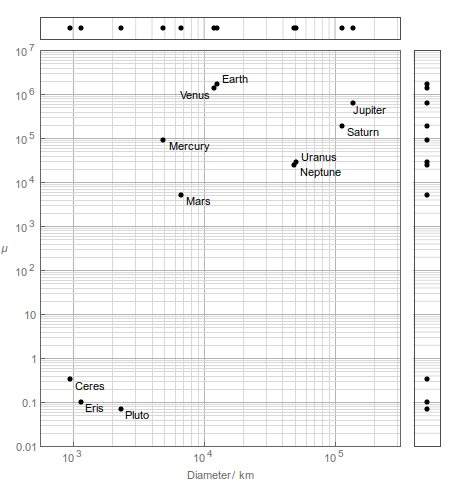 or with an arbitrary horizontal axis, in order of decreasing discriminant, 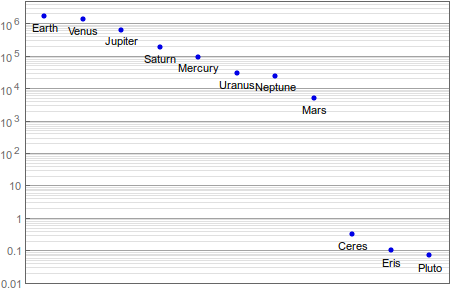 Suddenly, a natural hard line emerges. If you look only at the mass and the diameter of the objects (shown in the insets above the plots), then there is a pretty continuous spread of values, with bigger gaps between the gas giants and the terrestrial planets than between Mercury and Eris/Pluto. However, if you look at the planetary discriminant, on the vertical axis, you get a very clear grouping into two distinct populations, separated by over four orders of magnitude. There's a finite set of bodies that have "cleared their orbits", and some other bodies which are well, well behind in that respect.

This is the main reason that "clearing its orbital zone" was chosen as a criterion for planethood. It relies on a distinction that is actually there in the solar system, and very little on arbitrary human decisions. It's important to note that this criterion need not have worked: this parameter might also have come out as a continuum, with some bodies having emptier orbits and some others having slightly fuller ones, and no natural place to draw the line, in which case the definition would have been different. As it happens, this is indeed a good discriminant.

For further reading, I recommend the Wikipedia article on 'Clearing the neighbourhood', as well as the original paper where this criterion was proposed,

which is in general very readable (though there are some technical bits in the middle which are easy to spot and harmless to skip), and from which I took the discriminant data for the plots above.

Edit: I must apologize for having included, in previous versions of this post, an incorrect plot, caused by taking data from Wikipedia without verifying it. In particular, the planetary discriminant for Mars was wrong (1.8×105 instead of 5.1×103), which now puts it below Neptune's instead of just below Saturn's, but the overall conclusions are not affected. The Mathematica code for the graphics is available at Import["http://goo.gl/NaH6rM"]["http://i.stack.imgur.com/CQA4T.png"].

... and, as a final aside: Pluto is awesome. It was visited in July 2015 by the New Horizons probe, which found a world that was much more rich, dynamic, and active than anyone expected, including what appear to be churning lakes of solid nitrogen ringed by mountains of water ice, among other marvels. 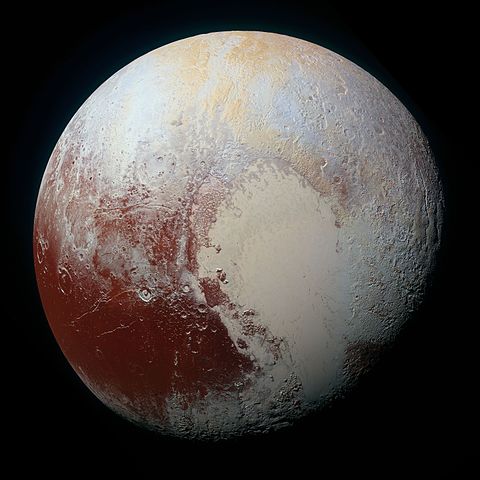 (Note the image has been colour-enhanced to bring out the variety of surface materials; the true-colour version of this image is here.) I, personally, don't feel it's at all necessary to 'grandfather' Pluto into the list of planets to really feel the awe at the amazing place it is - it's perfectly OK for it to be a cool place with cool science, that is also not a planet.

Well, it depends on how you define a planet.

According to IAU (InternationalAstronomical Union), an object should satisfy three conditions for it to be called a planet

Pluto was demoted as a planet because it failed the third criteria. Currently, there are only Eight planets that satisfy the three conditions

There are five dwarf planets officially recognised by IAU

Definitions don't change facts. The fact is that there are 10 known planets in our system. From closest to farthest from the Sun they are:

In 2016 an eleventh planet was postulated from the orbits of smaller Kuiper belt objects. However, since then alternative theories explaining the orbits have been proposed so that planet Eleven doesn't have to exist. In 2019 it was proposed that planet Eleven, if it exists, may actually be a primordial black hole, having a diameter of about 2 inches (5 cm). As such it could have own planets, but these belong to the black hole, not directly to the Sun.

If you want to know why the 2006 definition of planets and so-called dwarf planets, which was selected by ~4% of IAU astronomers, has no scientific hold, google something like "Alan Stern Pluto planet". Dr Stern explains very well how unscientific the definition is and more.

Not the answer you're looking for? Browse other questions tagged solar-system planet dwarf-planets or ask your own question.

8
Is Jupiter a dwarf planet?
6
Is the point of this paper to say that Pluto's status as a planet should have been handled scientifically, rather than by a vote?
8
What exactly is a “moon”?
12
Can there be an object with planetary discriminant between Ceres and Neptune?
5
Up to 384 minor planets (including Pluto) qualify as planets?
1
What are the requirements to become a planet?