How many stars can stay close to each other without collapsing?

Is it possible for two stars to exist close to each other?

"Close" is relative; let's assume that two stars are close to each other if they are at the center of the same solar system.

It's possible for this to happen with 3 stars. But what about more? How many stars can be the center of exactly one solar system without collapsing because of gravity?

Well, if they have an angular momentum with respect to their center of mass, or in other words , if they are in orbit, gravitational collapse is not the issue.

This is what happens when three bodies are in orbit around each other. Don't get disappointed so soon. There is indeed a way to avoid this. If the three bodies are of comparable mass, and one of the bodies is situated at L4 or L5, tuning the orbital parameters may work just fine, but then you gotta worry about tidal forces. 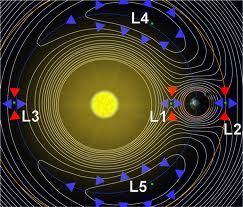 So, if the size of our third star exceeds the area given to it at L4/L5, it will experience tidal forces and will start ejecting mass to either of the two other stars, or both.

But as Zolan commented above, astronomy with an infinite universe has a possibility for everything. What are listed above are the most common problems which arise, that is the reasons which are mainly responsible for making such systems highly unlikely of existence.

But here's a system which works the way you described :

So, the answer to your question, YES and NO

We currently know of two star systems with 7 stars: Nu Scorpii and AR Cassiopeiae. The two have different structures, both of which are complicated but appear to be stable on stellar timescales.

Nu Scorpii AB and Nu Scorpii CD have a long orbital period (compared to the days-long period of Nu Scorpii Aa and Ab), likely in the hundreds of thousands of years.

As with Nu Scorpii CD, AR Cassiopeia CD and FG orbit AR Cassiopeiae AB on a timescale of hundreds of thousands of years.

The key thing to note about these high-multiplicity multiple-star systems is that their components are often binary systems themselves. In other words, you don't have a case where there's one or two central stars, with the rest independently orbiting them, or where you have a bunch of stars independently orbiting the same point. It's much stabler to create a few tight binaries and then set them in motion - much like a normal triple-star system, except each component is actually two stars.

So, why haven't we found star systems with more than 7 stars in them? There are a few possible reasons:

Not the answer you're looking for? Browse other questions tagged star binary-star or ask your own question.

9
How can the life time of a multiple star system, such as for example the trinary system PSR J0337+1715 be derived?
6
How do the orbits of Nu Scorpii and AR Cassiopeiae work?
1
State vectors of "interesting" multiple stars

29
How many stars and galaxies can be seen by the naked eye?
12
Do stars of a galaxy change their positions relatively to each other?
3
What happens if two or three stars collide with each other?
9
How many actual stars are Polaris?
2
Complex life in binary black hole - Sun(s) system
2
Could there be a planet at the barycenter between two or more stars revolving around each other?
4
Is a double quasi-binary system valid?