Can solar luminosity & activity be predicted?

Can a star's luminosity and its activity, solar flares and sunspots, be predicted?

If so, with what accuracy & precision?

All of these effects are related to the 11 year solar cycle. And while we know there are times when the sun is "active" versus "inactive" we aren't necessarily predicting exactly where sunspots or solar flares will occur, but how many we see in total. 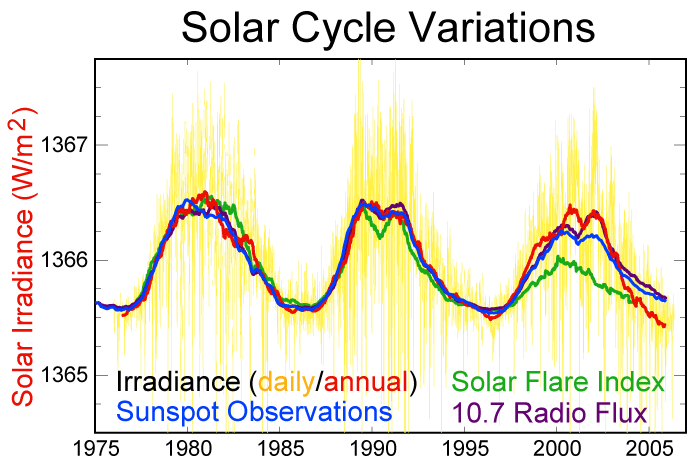 I will be specific to answering the part regarding the prediction of solar flares.

Solar flares are very volatile and dynamic phenomena associated to the breaking and reconnecting of magnetic field lines in the Sun's photosphere.

There is a phenomena associated with solar flares, called quasi-periodic pulsations, which sometimes precede a solar flaring event. As such, monitoring of such pulsations may give rise to a plausible prediction method. However, the accuracy and reliability is still to be debated.

A few good papers on QPPs:

Time delays in quasi-periodic pulsations observed during the X2.2 solar flare on 2011 February 15

2
Solar luminosity proportional to $G^7$?
0
Calculate Luminosity of Vega
7
Difference in creation of solar flares and CME?
13
Do other G-type stars follow an 11-year cycle of activity?
5
How to calculate luminosity in g-band from absolute AB magnitude and luminosity distance?
5
What could be the cause of solar "campfires"?
2
Is it fair to describe a solar flare as a big lightning strike on the sun?
4
What would be the effect of a large solar flare on motor vehicles?