You can tell a lot about Galactic structure by just looking and indeed the distribution of bright stars is non-spherical and non uniform.

The ~5000 stars that can be seen with the naked eye have a roughly "lognormal" distribution of distance. I show plots below which were generated from the most recent version of the Hipparcos parallax catalogue. Fig.1 shows results for all stars with $5.5<V<6.5$ (i.e. very faint naked eye stars). The Hipparcos catalogue is almost complete for these stars, though some stars are so far away that the distance is highly uncertain - nevertheless, the general picture should be ok.

This is just small enough that if we look at the demographics of stars in two Galactic latitude regions we do see a difference. Fig. 2 below shows the distance distribution of stars with $5.5<V<6.5$ at low Galactic latitudes (within 15 degrees of the plane in green) and more than 45 degrees from the plane (in blue). There is a clear and significant difference. More stars can be seen at greater distances towards the plane, despite the greater dust extinction in those directions,betraying the non spherically-symmetric nature of stars in our Galaxy. 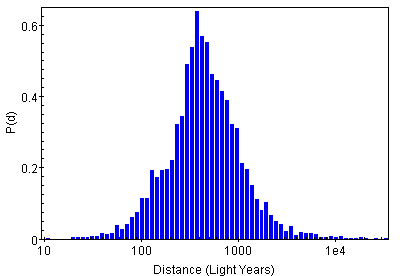 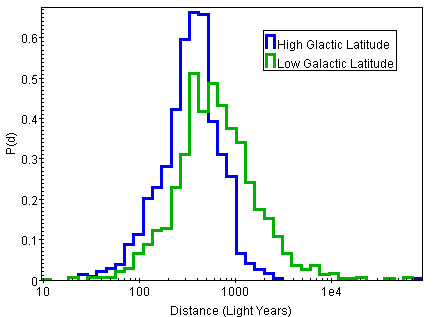 I then split the Hipparcos sample into bright ($V<6$, 5000 stars) and very bright ($V<3$, 173 stars) and looked at the distribution of stars per unit area on the sky as a function of Galactic latitude (Fig. 3). The results are shown below and more obviously make the point. It turns out that the asymmetry between in an out of the plane is clearly seen, even in the brighter sample. The reason is that the very bright stars are not all that much closer than the bright stars. Perhaps a median of 200 light years vs 350 light years. Thus the scale height of the Galactic disc must be small enough that the difference from spherical symmetry is already apparent at these kinds of distances. 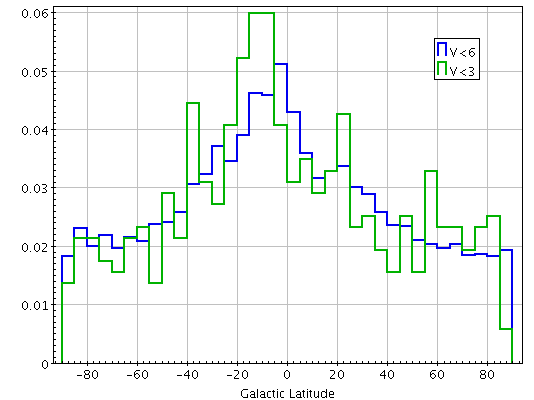 You can even see from the plot above that there is also a slight concentration towards negative latitudes; the peak density is around -5 to -10 degrees in both cases. This is likely because the Sun is above the Galactic plane at present (though I also wonder if dust plays a role). The Sun is currently 60 light years above the plane and heading upwards (see How far is the Earth/Sun above/below the galactic plane, and is it heading toward/away from it? ). The combination of the results I have shown may be sufficient to conclude that the Galactic disc has a "characteristic thickness* not more than a few hundred light years, but more than 60 light years!

When we look at the Milky Way we are seeing millions of unresolved stars that are in general more distant still. The effects of the disk-like nature of the Galaxy become more apparent as one goes to greater distances. In particular, at high Galactic latitudes one simply runs out of stars and hence there is no uniformly illuminated sky - leading to Olber's paradox, as correctly stated in another answer. But at low latitudes, there are sufficient stars that in general, within the resolution of our eyes there are many stars whose light sums to provide a visual stimulus. This picture is interrupted by dust. Dust in the Galaxy is even more concentrated towards the plane than the stars. It is for this reason that beyond a few thousand light years, dust plays a major role in shaping the Milky Way structures that we can see, effectively blocking light at very low Galactic latitudes beyond a few thousand light years.

Not the answer you're looking for? Browse other questions tagged star-gazing naked-eye .

19
Are the stars distributed in uniform distribution, on the celestial dome, with respect to brightness?
28
How far is the Earth/Sun above/below the galactic plane, and is it heading toward/away from it?
7
Stars in the sky
5
What would the night sky look like if the interstellar medium didn't exist to absorb or block light?
2
How much of the Milky Way is visible to the naked eye from earth?
-3
Is the solar system the only survivor of cosmic evolution?
0
Parts of the Universe Shows Fewer Named Stars