The following image is a map of the area surrounding the Local Bubble. One side of the image is 1700 lightyears. From the Sun to the Hyades (immediately below the sun) it is 150 lightyears.

The local bubble, with the sun in its center, has three immediate neighboring bubbles, numbered in roman numerals, Loop I, II, and III. At the lower right edge we can see a section of the Orion-Eridanus-Superbubble.

What is the name of the area marked in green?

Image source: Henbest/Couper, The Guide to the Galaxy. Found online at http://www.astronomy.ohio-state.edu/~pogge/TeachRes/Ast162/ISM/Local500pcAnn.gif

In the color image quoted in my question, the galactic core lies beyond the top center. This would be 0° galactic longitude. Going counterclockwise, 238° is somewhere around Beteigeuze.

Here is a "[p]rojection of the Local Cavity onto the Galactic plane":

But if you try to superimpose this image on the other one (I matched the positions of the Sun, the Ophiuchus clouds and the Pleiades bubble, the Lupus cloud is a bit off), it seems as if the area marked in green was actually part of our Local Bubble! And GSH 238+00+09 then appears to be identical to the Orion-Eridanus-Superbubble:

I'm sure I didn't match this correctly. Especially Loop III would be in totally the wrong place. But I found an article that used the same black and white image to illustrate possible locations of Loop III, and the second alternative to the one shown here was in the upper right hand corner, where it would then overlap with "Loop II" of the color image. But probably we should not worry too much over Loops II and III. The creator of the 3D Galaxy Map writes: "I haven't added Loop II, III or IV because I couldn't find any accurate information about their size and location." I'm sure he has been looking more thoroughly than I have, so I feel the mismatch of Loop III is not a problem.

But then the color image is from 1994, and understanding and cartography of our Galactic neighborhood has advanced quite a bit in the ten years between the two publications, so maybe the placement of the Local Bubble in the color map is only a rough equivalent and the mismatch between the two images is not my fault but a result of scientific progress.

Here is another image (rotated 180° in relation to the color image from my question) of local loops, bubbles, and superbubbles, where it becomes clear that GSH 238+00+09 (termed "New Superbubble" (NSB) in this image) is not identical to the Orion-Eridanus-Superbubble: 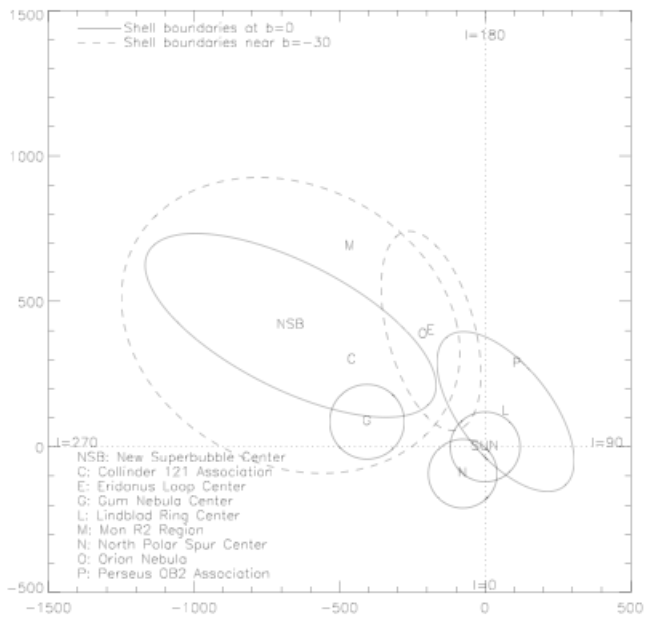 If you compare the scales of this last and my first color image, you will note that the color image falls completely inside the circle denoting the Local Bubble, supporting the thought that the green area lies within it (and not within GSH 238+00+09 or the Orion-Eridanus-Bubble). But this second image also supports the insight that the color image might not be that accurate, and that maybe the area whose name I am looking for does not exist in that shape at all.

In the following image (which shows Loop I as the Scorpius-Centraurus Shells and the Orion-Eridanus-Loop as the Orion Shell) the red blot immediately rimward (lower right) of the sun is the Taurus Dark Cloud. This is not from a scientific but a popular publication (just as my color image), so we should not expect it to be totally accurate, but it still suports the notion that the green area might be part of the Local Bubble.

Here is a final image, apparently a different rendering of the image from Lallement et al. (2003), the first image given in this answer. In this image the location of some important stars is marked. Most notably ε CM, which is the scientific name for the Arab name Adhara, with which the same star is marked in the color image from my question and there lies far out in the green area, **lies still within the Local Bubble in this image, close to the edge. 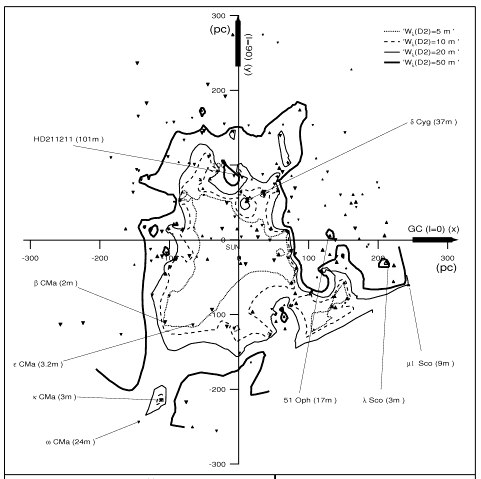 Here I overlayed the previous image and the image from my question. I matched the sun an Adhara. Other objects are still a bit off, but not much, and we get a good idea of where the Local Bubble ends.

So it seems the local bubble extends to a bit beyond the star Adhara, halfway from the Sun to the right edge of the image in my question and does indeed include the closer part of the green area.

I'll leave my first thoughts and the badly matched image in this answer, to document how I came to the final conclusion.

I'd welcome any thoughts and corrections of this attempt at an answer.

13
What is the name of that which exists beyond the Universe?
5
Terminology: Is there a name for the points on the surfaces of tidally locked parent/satellite bodies that always face each other?
7
What's the name for [the other kind of planet] in a binary star system?
1
What does the filter name I+z' mean
21
What is the name of meteoroids which hit Moon, Mars, or pretty much anything that isn’t the Earth?
2
How does one go about submitting a name for a newly-discovered lunar crater?