Why do (most of) the planets rotate counterclockwise, i.e. the same way the Sun does?

Referring to the mechanisms explaining the solar system formation and to the initial rotation of the gaseous cloud that collapsed, I understand easily why the planets orbit the Sun the same way this one rotate (say counterclockwise) but I can't figure out why this apply to planets rotation too. Thinking about that from Kepler's laws and angular momentum conservation point of view, I might conclude that the planets should rotate clockwise because the velocity of the particles that aggregated during the planets formation was higher closer to the Sun...

Apart from a short explanation, I would like to have a good reference from the literature if possible.

Edit, to make my reasoning more explicit: following Kepler's laws, the particles that aggregate on the "day side" of the proto-planets in the east-west direction relative to the ground are faster than the ones hitting on the "night side" in the west-east direction. If we add all of these contributions, the planets should rotate in the opposite direction relative to the initial cloud (i.e. relative to the actual Sun rotation). I guess something is wrong or missing there (to counterbalance the phenomenon I just described) but I can't see what it is...

New edit: References I found some published articles dealing with this kind of question but I don't have the time right now to read them carefully. If someone is motivated to do so, do not hesitate ;-) If I find the answer to my question amongst these papers, I will post it there later. Of course, you may need to use the network of an institution with a subscription to these editors to access them:

Even though I'm a professional astronomer (but not an expert on this field), I don't have a good answer. AFAIK, this question is still open. Actually, the fact that most planets in the Solar system rotate in the same sense as they orbit the Sun is an important constraint on possible planet formation scenarios (of which still several are presently discussed by scientists).

For example, the idea that planets form out of dust collected at the centre of vortices in the proto-planetary disc can be almost ruled out, because retrograde vortices are much more stable and long-lived than prograde ones (Jupiter's red spot is a retrograde vortex), and hence planets should be retrograde, but aren't.

The reason Venus and Uranus have a spin opposite to most other planets is most likely because they were hit by another large object some time during their formation, causing their spin to change directions. This also explains why Uranus' axis is tilted to such a severe extent.

The early gas cloud in a circumstellar accretion disk rotates the star at a sub-Keplerian velocity. According to Semenov and Teague: "The departure from the perfect Keplerian rotation is due to the thermal gradient, which makes gas orbital velocities to be slightly sub-Keplerian."

Astronomers disagree about just how much slower the gas travels for various models, but we can get a good idea at least for one system from Hayworth et. al in their paper: "Radiation-pressure-driven sub-Keplerian rotation of the disc around the AGB star L-2 Puppis." 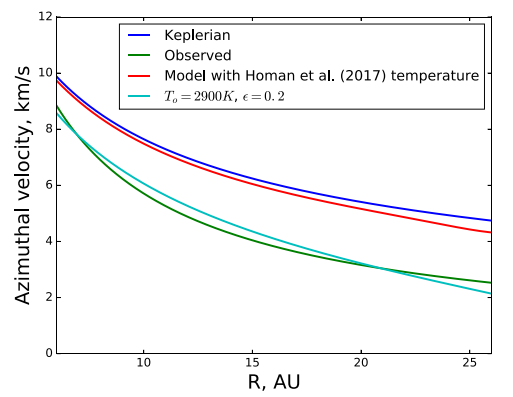 In this case, the gas is moving much more slowly than a Keplerian satellite would.

In the circumstellar disk, solids in the form of tiny particles move at nearly the same slow rate as the gas due to drag. As the solids coalesce into clumps of solids, their ballistic coefficient $C_b$ goes up as expected from: $$C_b= \frac{m}{C_da}$$ where $m$ is the mass of the object, $a$ is the cross-sectional area, and $C_d$ is the drag coefficient. This is a natural result of a shape's mass to cross-sectional area ratio ($m/a$) increasing with size (consider a sphere).

A bigger solid will then have a higher terminal velocity in the same orbit as a smaller solid. As it orbits the star, it will collide with and pull in slower, smaller, solid matter pieces. The combination of gaseous drag and collisions with slower moving solids will cause the angular momentum of the big piece around the star to decrease. As the angular momentum of the piece decreases, it's orbit will migrate inward. Each orbital pass will have more solid debris inside the orbit of the big piece than outside of the orbit, since the big piece will have already "swept out" debris from its previous passes. The slower moving solids closer to the star will hit the big piece from underneath, causing it to spin in a prograde motion, consistent with the motion of the whole disk.

As the planets lose angular momentum, they create a bow-wave which pushes the gas. This bow-wave adds turbulence and also forces pebbles to land at prograde angles. Johansen and Lacerda performed hydrodynamical simulations in their paper: "Prograde rotation of protoplanets by accretion of pebbles in a gaseous environment". Here is one of their figures. 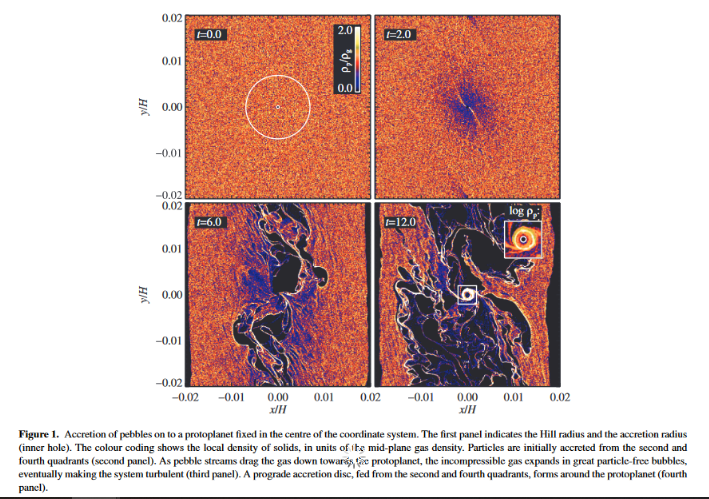 In the above graph, the x-axis points away from the star, and the y-axis is oriented in the direction of the travel of the disk.

Note: This is just one theory of how most of the planets and big asteroids ended up with prograde rotation. It certainly isn't all decided science. One could imagine another mechanism in which matter was much denser closer to the center of the disk. So as protoplanets revolved around the star much faster than the rest of the disk, the gaseous drag on the inner side of the star delivered much more prograde torque, even though it was moving slightly slower than the gas on the outer side.

I can't give you an explicit ant mathematical explanation but maybe this simulations give you a hint.

If you look at the bottom one with beta=0.01 (faster initial rotation speed) you will see how possibly a binary or even ternary system is formed. I guess this could be picked as an example for planetary formation.

The outer planets of our Solar system are not only moving the same way but have almost equal angular momenta. This includes the Sun spinning on its axis. Why it is so is not clear.