What is the exact position of the Large Magellanic Cloud?

I am not able to visualize the position of the LMC and have not found a satisfactory explanation... Can someone please answer it this way?

Note: Please consider the direction of the ray(Earth->Center) as the axis of a compass that points towards the north. E.g://Answer format that i was hoping for: To the South-West of the Segment, and below its plane.

First of all: your coordinate system (as I understand it) is not "well defined". You only provide a line (Earth --> Milky way centre) and define that as the North-South axis. You don't give a reference for the east-west axis or the up-down axis. So, I'll assume that the East-West axis lies along the plane of the Milky way and up is where the Boötes Dwarf system is. This way, our coordinate system is equal to this image from the LMC Wikipedia site. 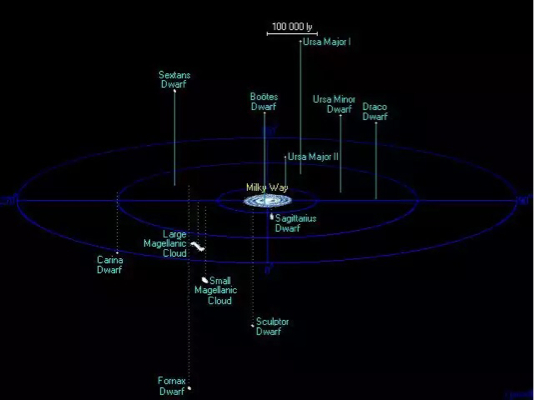 The problem with this picture is that the position of the Earth is only implicitly given. It is "behind" the center of the Milky Way. So from that position, the LMC is almost to our right (east) and a bit below the plane of the Milky way; about 30 to 40 degrees down.

This is also nicely validated by this image, acquired here (note that the grid is in 30 degree angles).

So, finally we can answer your question in the way you wanted: in the north-east to east segment, and below its plane.

Not the answer you're looking for? Browse other questions tagged galaxy milky-way magellanic-cloud or ask your own question.