On the net I could find only tables or diagrams, as this: 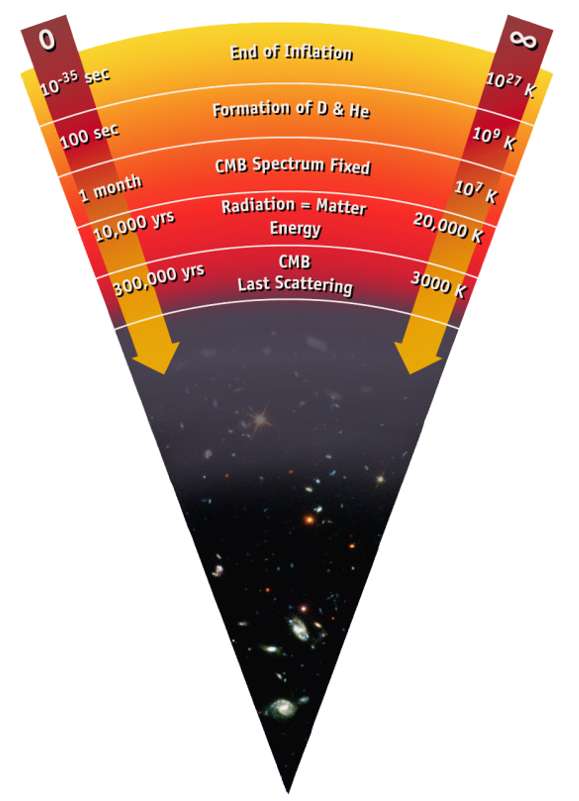 (Here is a link to the page it accompanies: http://www.astro.ucla.edu/~wright/BBhistory)

I am practically interested in the interval between the first seconds and the first some ten millions of years.

Is it possible? Some simple formula were also enough (although I think, there are different formulas for the different eras after the Big Bang).

Both the temperature and the density of a toy universe can, in a way, be linked to the age of the universe ($t$). Certain properties of the universe are dependent upon a scale factor $a(t)$ that is a function of time. The expansion of such a universe can be written in the Friedmann-Lemaitre-Robertson-Walker (FLRW) metric, generally written as $$ds^2 = dt^2 - a(t)^2(d\Sigma^2)$$ where, in spherical coordinates, $d\Sigma$ is given by $$d\Sigma^2 = \frac{dr^2}{1-kr^2} + r^2d\theta^2 + r^2\sin^2\theta d\phi^2$$ where $k$ is a constant. This shows that, in a toy universe, $r$ and $dr$ is proportional to $a(t)$, and so in a perfectly spherical toy universe, you could relate the volume to $t$. We know that, for a sphere, $$V=\frac{4}{3}\pi r^3$$ and because $d\Sigma^2$ (and by extension $r^2$) is related to $a(t)^2$, we can relate volume to time. If you knew the mass-energy of the universe, you could then relate the change in density to $t$. Unfortunately, our universe does not appear to be perfectly spherical, and so this may not apply.

Not the answer you're looking for? Browse other questions tagged early-universe or ask your own question.

18
How do we know the big bang didn't happen in an existing universe?
1
The reason behind Big Bang
0
What was the entity/particle/state at the time of the Big bang?
30
Why didn't the Big Bang produce heavier elements?
6
Could the big bang have created super massive black holes?
2
What was the size of the universe around 400 million years after the Big Bang?