Is there matter forming in the inflationary space?

Following the answers and the line of thinking from here Is there enough hydrogen left after a star dies so another star will have enough to light up?

I was wondering if is there any possibility to know if, where new space is created between the galaxies, is there also created any kind of new matter ( i.e. hydrogen, or subatomic particles that could eventually form atoms, which will lead to forming new stars and galaxies ) ?

A note: don't talk about inflation for the current expansion. Inflation is the brief period immediately after the BB when the universe expanded at an outlandish rate.

Matter was formed when the universe was so compact that its temperature was billions and even trillions of Kelvin hot. The energy of the vacuum in any given volume was so high that matter-antimatter pairs were created, which usually quickly annihilated. Sometimes, however those short-lived particles collided, releasing large amounts of energy. For instance, to create an electron you need an energy of 0.5 MeV. The graph below shows that at a temperature of $10^{16}$ K collision energy could be as high as 1 TeV.

Because of its expansion the universe has cooled so much that its temperature is less than 3 K, which isn't nearly enough to create any new particles. 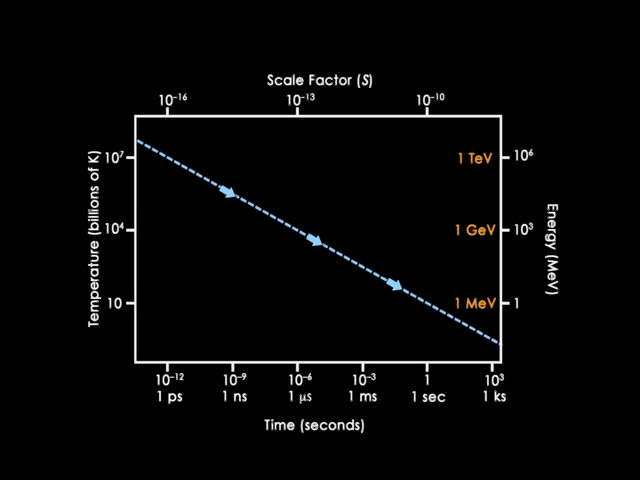 The graph shows how temperature and energy drop as the universe expands in the first seconds after the BB. Note that at 1000 seconds (about 20 minutes) the energy is too low to create electrons (0.5 MeV), let alone heavier elements.

What is created in the expansion, though, is dark energy. Its density is constant, so when the universe expands to double its size the amount of dark energy will also be doubled. (That's the reason why the expansion goes ever faster and faster, with nothing to stop it.)

Not the answer you're looking for? Browse other questions tagged cosmological-inflation dark-matter star-formation .

12
Is there enough hydrogen left after a star dies so another star will have enough to light up?

7
Mechanism for Brown Dwarf Fusion
6
Is there Dark Matter inside the Earth?
8
Can dark matter decrease the Jeans length?
2
Could dark matter assist with star formation?
3
How can ionized emission line flux decrease as a function of increasing metallicity or abundance?
1
Why does star formation cease?
3
The contribution of components like dark matter, stars and gas to the mass of a galaxy
42
Are new stars less pure as generations go by?
1
Is a black hole found in the centre of the low-surface-brightness and dark-matter-free galaxy AGC 114905