In slow-roll inflation models, the early inflation of the universe is driven by the flat non-zero part of the inflaton potential, and it ends as the ball rolls down the cliff and the potential energy released leads then to the formation of matter. 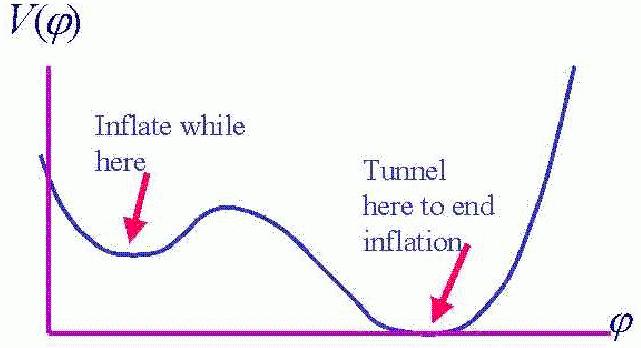 Why (from a physical point of view) are slow-roll inflation models no longer considered to be realistic, what are their disadvantages? What can models that explain (the end of) the early inflation by a tunneling transition between to vacua explain or describe, that slow roll models can not do?

I...think you've got it backwards? Slow-roll inflation is alive and well, unlike models which involve tunneling between two vacua. The model of inflation first proposed by Alan Guth back in 1980 was a tunneling model. But it had a serious problem: it didn't reheat. Tunneling from a false vacuum to a true one (or a lower-energy false one) wouldn't release any radiation. And we need that radiation, because we are that radiation, cooled down and condensed after nearly 14 billion years of expansion. The solution was slow-roll inflation: as you mentioned in your question, rolling down the potential well releases a great deal of energy, which in turn leads to the wide variety of matter and radiation in the universe today. Slow-roll inflation also does a nice job of predicting the tiny density fluctuations in the early universe that seeded the formation of all the structures in the universe. Wikipedia has more on all of this.

A small disclaimer: there's a lot of inflationary models out there in the literature (there's a hilarious partial list in footnote 3 of this excellent paper by Yadav and Wandelt), and for all I know, one or more of them involve vacuum decay. But the dominant paradigm for inflation today is definitely slow-roll.

Not the answer you're looking for? Browse other questions tagged cosmology cosmological-inflation early-universe .

9
Is the Universe really expanding at an increasing rate?
5
Were parts of the Universe deflating during Inflation?
3
Are there expanding-universe cosmological models that do not include inflation?
5
Has a “white hole” theory been advanced to explain anomalous star formation in Sagittarius A?
1
Can eternal inflation and gravity explain dark energy?
2
Neutrino Modelling in Friedmann Equation
3
Scalar field displacement from the minimum of the potential gives rise to particles/dark matter, why?