Newly born stars often have bilateral jets of gas ejected from them at high speeds (hundreds of km per seconds), often ending in Herbig-Haro objects. As I understand it those jets would have something to do with the star's magnetic field.

How does this work? How can a magnetic field cause the high-energy ejection of matter?

Did you get this from Wikipedia? If you did, I sympathize; all the entries related to this give no explanation for the phenomenon. If you didn't go there . . . Well, it won't answer your question.

But I think I've found the answer somewhere else. I'll go over some background stuff for anyone out there who doesn't know much about this, to make it a bit clearer (although you should be able to skip all this). Protostars are small pre-pre-main-sequence objects. At first, they aren't more than small clumps of gas and dust in a stellar nursery (a special nebula, perhaps). Soon, though, more matter begins to come towards a clump, and gradually the clump builds up enough matter that it begins a slight gravitational collapse into a definite object. Temperatures build, and eventually the object becomes a pre-main-sequence star.

These pre-main-sequence stars begin to accrete matter (here's where you should stop dozing off) into a circumstellar disk. At the moment, it doesn't matter if the disk will become a protoplanetary disk or something completely different; for now, we can treat it as a circumstellar accretion disk. Matter "falls" into the disk and towards the star; the star absorbs most of it. However, something else comes into play, and that's the star's magnetic field.

A lot of objects in the universe have magnetic fields, and a young pre-main-sequence star is no exception. It's field may be stronger than that of the Earth - so strong, in fact, that some of the matter in the circumstellar accretion disk follows slightly different paths than it normally would - paths along the field lines of the star's magnetic field. While there isn't enough evidence (scarcely any at all, really) to support or, more importantly, disprove this idea, it is though that the magnetic field lines lead the matter towards a point on the star, perhaps at its poles, and then compress it together into an astrophysical jet (or bipolar outflow) that shoots out into space. Such jets are often associated with other cool phenomena, such as Herbig-Haro objects.

So for everyone who considers this post a "Too long; didn't read" answer, here's a summary:

The truth is that nobody really knows. The current explanations for this phenomenon are that they are caused by matter from accretion disks being concentrated by magnetic field lines onto a single (well, double, one on either end of an axis) point, which then becomes an astrophysical jet.

Note: This paper, specifically the second page, was extremely helpful. Other pages that might interest you (or provide more information for those who are curious about this and related topics) are:

A protostar star in the class I phase is surrounded by an optically thick envelope, but accretes matter through a disk. The protostar will have some magnetic field - it may be mostly primordial at this stage, or could be generated by an internal dynamo. Material accreting from the disk is thought to be locked onto the field lines - a well known phenomenon caused by charged particles spiralling around the field lines.

What happens net to drive the jets/outflows is still very actively debated. A very popular baseline model is the so-called Uchida-Shibata theory. Imagine an initially radial magnetic field. As the material locks onto the field is must pull it into a spiral pattern because the accreting material has angular momentum and cannot fall directly into the stellar surface. This action will twist the field lines into a helical shape, with an axis similar to that of the accretion disk of the protostar.

The helix will be tighter closer to the stellar rotation pole and will open out further away from the protostar. This gradient in magnetic field strength provides a pressure gradient (because a force acts on charged particles perpendicularly to the field lines) which accelerates material along the polar axis. At the same time, the accelerating material is collimated by punching its way out through the envelope - once some material has opened up a path, it becomes easier for subsequent material to follow.

Below is an extract from a paper (unfortunately behind a paywall) by Matsumoto (2009) which has a picture that gives you the general idea. 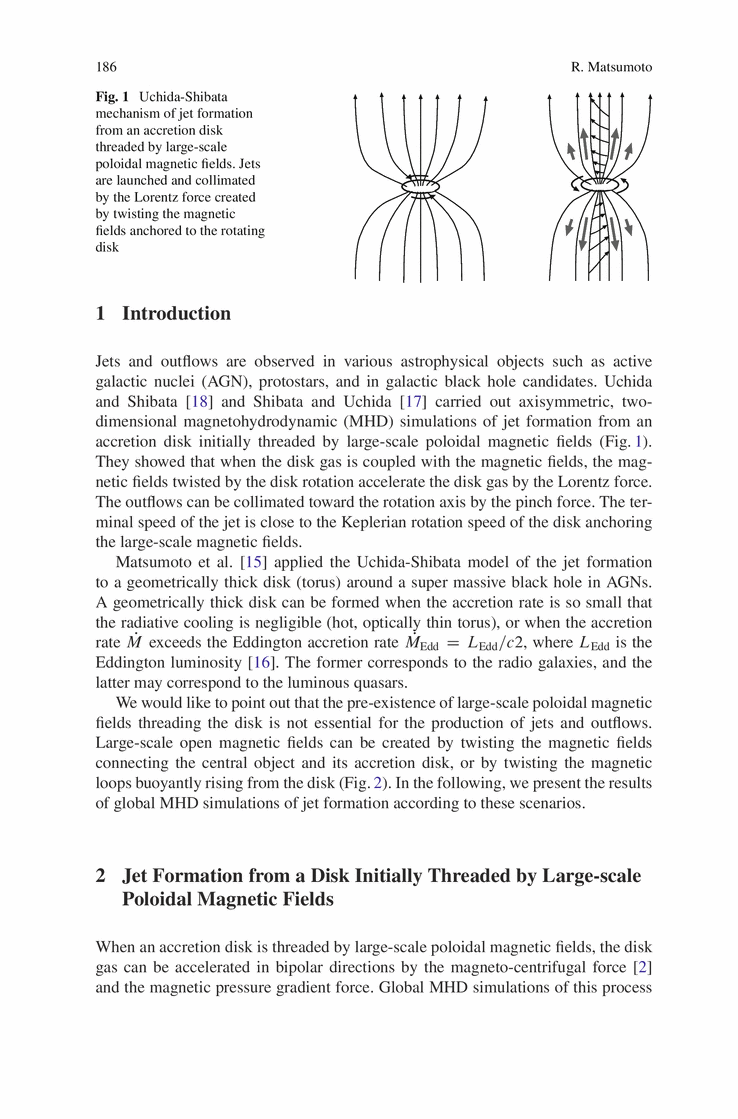 Not the answer you're looking for? Browse other questions tagged star-formation or ask your own question.

13
Can protoplanetary disks form main-sequence stars?
3
What are possible methods of discerning a starburst AGN composite galaxy?
3
Why do pre-main sequence stars show lithium in absorption?
3
What are infall signatures in stars?
0
Is there any definitive proof of stars being “born” in nebula formations?
12
What will future populations of stars be like?