What was the greatest spatial extent of the Asteroid Belt prior to the Late Heavy Bombardment?

Reading the article On the asteroid belt’s orbital and size distribution (Gladman et al. 2009), there is an interest point made:

asteroids a few kilometers and smaller in size are recent collisional shards of larger objects since their lifetime against collisional destruction is much less than the age of the Solar System. As such, these bodies preserve information about collisional breakup, the dominant physical process that has shaped the present asteroid belt.

This suggests that there would have been a lot more asteroids etc in the main belt at the time prior to the Late Heavy Bombardment (~4 billion years ago) - which is after the major planets had formed.

My question is what was the greatest spatial extent of the Asteroid Belt in the period just before the Late Heavy Bombardment?

(I am after peer reviewed resources).

There have been some studies based on observations on the best preserved impact craters of that time in the inner solar system, namely those on Mercury and the Moon. In the paper, Impact-induced compositional variations on Mercury (Edgard et al. 2014), state that based on the nature of Mercury's craters, they have developed a

New dynamical simulations of the early evolution of the asteroid belt hint at the presence of additional asteroids in a region interior to the present-day belt, known as the “E-belt”.

Through their modelling and simulations, they have determined that the 'E-belt' 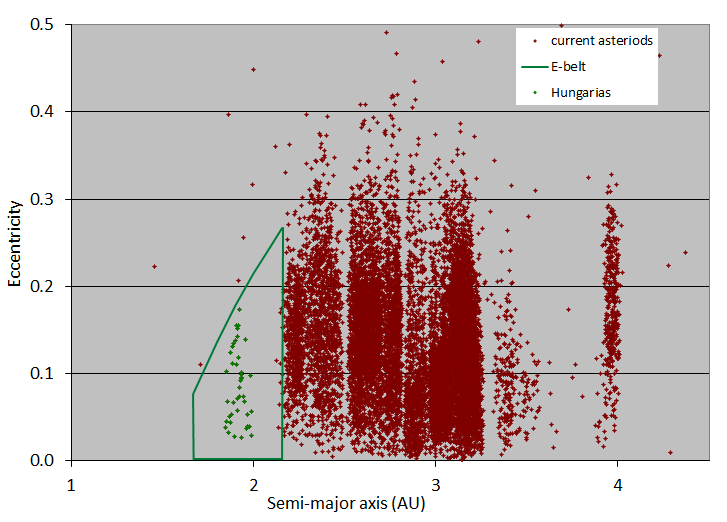 Image attribution: By Agmartin (Own work) [CC-BY-3.0], via Wikimedia Commons