Where does the Solar System end?

The Sun is roughly 4 light-years away from the closest star system, the Alpha Centauri system. The planets in our Solar System, however, aren't even close to that far away from the Sun. Where does our Solar System end? Is the edge considered to be the orbit of Neptune, the Kuiper Belt, the Oort Cloud, or something else?

Note: this question on Physics SE is similar, but the answers posted here go in different directions.

The whole concept of an "edge" is somewhat inaccurate as far as the solar system is concerned, for there is no physical boundary to it - there is no wall past which there's a sign that says, "Solar System Ends Here." There are, however, specific regions of space that include outlying members of our solar system, and a region beyond-which the Sun can no longer hold any influence.

The last part of that definition appears to be a viable definition of the edge of the solar system. Specifically,

valid boundary region for the "edge" of the solar system is the heliopause. This is the region of space where the sun's solar wind meets that of other stars. It is a fluctuating boundary that is estimated to be approximately 17.6 billion miles (120 A.U.) away. Note that this is within the Oort Cloud.

Though the article above is a bit dated, the notion of the heliopause has been still of interest to scientists, particularly how far away it is - hence, the interest in the continuing Voyager missions, which states on the website, that it has 3 phases:

the spacecraft has been operating in the heliosheath environment which is still dominated by the Sun's magnetic field and particles contained in the solar wind.

The thickness of the heliosheath is uncertain and could be tens of AU thick taking several years to traverse.

Passage through the heliopause begins the interstellar exploration phase with the spacecraft operating in an interstellar wind dominated environment. 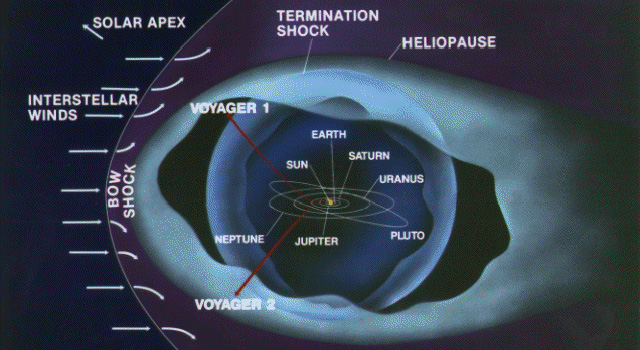 It is a bit complicated as we do not know the full extent of what the dynamics are like out there, a recent observation reported in the article A big surprise from the edge of the Solar System, reveal that the edge may be blurred by

Which is suggested in the article could be a mixing of solar and interstellar winds and magnetic fields, stating:

On one hand, the bubbles would seem to be a very porous shield, allowing many cosmic rays through the gaps. On the other hand, cosmic rays could get trapped inside the bubbles, which would make the froth a very good shield indeed.

Here's my answer. I'll try to make it as comprehensive as possible.

It's pretty hard to define the edge of the Solar System. Most people would probably define it as where objects are no longer gravitationally bound to the Sun. That just shifts the question a little, though: Where is that dividing line? To try to answer this, I'll go over the regions of the Solar System.

The first region is the domain of the inner planets - basically everything from the asteroid belt inwards. It is comprised of Mars, Earth, Venus, Mercury, their moons, and all the smaller objects that surround them. The inner Solar System is very rocky, as one can imagine. The terrestrial planets are primarily made of rock, as are the asteroids and the inner planets' moons.

The second region is the domain of the gas giants. It consists of Jupiter, Saturn, Uranus, Neptune, their moons, ring systems, and assorted smaller bodies, such as Trojan asteroids. The gas giants had a big influence on the Solar System when it was first formed, pulling in chunks of rocks, grabbing moons, and possibly stabilizing or de-stabilizing orbits. Some may have migrated outwards (as per the Nice model), but their orbits are currently stable. The gas giants are made largely of gases, but it is thought they have solid or molten cores. The composition of their moons is familiar - more like objects in the inner Solar System.

Next up is the Kuiper Belt. It's sometimes introduced as a cousin of the asteroid belt, but that's not accurate. The bodies that make up the Kuiper Belt are chunks of rock and ice. Notable examples of Kuiper Belt bodies and/or trans-Neptunian objects are the dwarf planets Pluto, Sedna, Makemake and Haumea. There are also lots of smaller objects, including some short-period comets (although these are more properly part of the lesser-known "scattered disk"). While there have been theories for years about another planet out there, it is not considered likely. The Belt extends from 30 to 50 AU.

Further out still is the Oort Cloud, named after Jan Oort. Observations of objects in the Oort Cloud are extremely difficult, if not impossible, so its existence has not yet been verified. It is populated by long-period comets and smaller objects. These are also composed of rock and ice. The Oort Cloud is thought to extend up to an incredible 50,000 AU. While the other regions so far mentioned are roughly in planes, the Oort Cloud is spherical.

In summary, while the Solar System is made of many regions, the heliopause is considered to be its outer boundary.

Once again, I welcome any and all input regarding this question and answer.

Whenever I see this question discussed, it seems that the heliopause, or some variation thereof, is given as an answer -- and then it's mentioned that the Oort Cloud extends beyond it.

A more correct answer, therefore, should be that it ends at that distance at which objects are, for all practical purposes, no longer bound to the solar system barycenter. This is usually defined by the Hill Sphere, which approximates the gravitational sphere of influence.

One simple view of the extent of the Solar System is the Hill sphere of the Sun with respect to local stars and the galactic nucleus.(1)

This extends out to two hundred thirty thousand AU, about 3.6 light years. Again, not a wall. According to (1) Cherbatov (1965), the radii of the gravitational spheres of the sun may be subdivided into:

I believe NASA is stating it is not only when solar wind but gravitational pull shifts... That's not to say the sun has no pull or solar wind but that the influence of the sun is now less than the surrounding environment. To put it simply, when the sun is no longer winning the tug of war.

I consider the edge of any solar system the distance beyond which the central star(s) don't provide for enough light to create a reasonable "day" on the star-facing side. In other words, if you're on a celestial body that has night on all sides (e.g. on an Oort cloud object), you may no longer consider being in that solar system, you're just on a body that is gravitationally attracted/influenced by a certain star. That border would be around an apparent magnitude of minus 12 caused by the central star.

As for this system, the edge would be around 1000 a.u. from the Sun, this is where I set its boundary, which is just beyond the outermost planet Sedna's aphelion. Beyond 1000 a.u. it is interstellar space.

17
What reason is there to doubt the existence of the hypothesised planet Tyche in the far distant solar system?
11
What effects do other planets have on the solar system?
6
Why won't the Milky Way colliding with Andromeda affect the Solar System?
5
Ejected planets during the early stages of the formation of the Solar System
3
What is the closest heavenly body to our solar system
4
How far out can the sun keep celestial objects revolving?
42
Closest star system to Alpha Centauri?
1
Are there actual asteroids in the Oort cloud?
7
How and when will Sirius migrating towards the Sun trigger the movement of Kuiper belt objects into the solar system?