Is it possible to see a moonrise or moonset twice in a day?

I've been wondering this for quite some time. Due to the variations in tilt from the earth we know that moonrise/moonset times vary. Is it possible that in any location on the earth one might see more than one moonrise or moonset in a given 24 hour period?

This only works (in the Northern hemisphere) when the Moon increases its declination (the height above the celestial equator) very rapidly. This happen only when the Moon is near the Vernal Equinox (i.e. in Aries or Pisces). And the observer needs to be at a high latitude (i.e. near the North pole such as Thule as mentioned by @barrycarter) 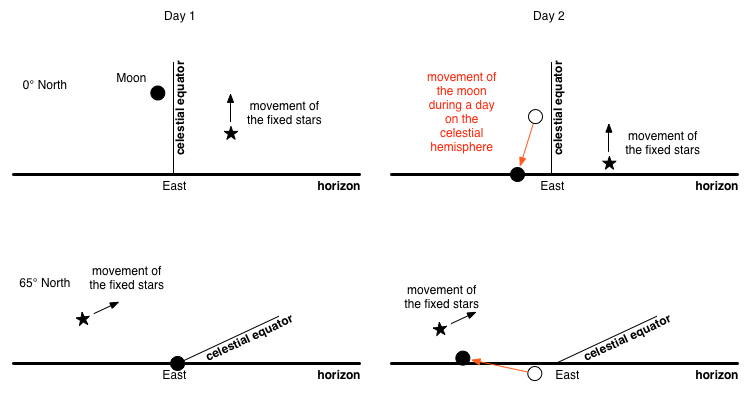 14
How does moonrise/moonset azimuth vary with time?

14
How does moonrise/moonset azimuth vary with time?
6
Is lunar elevation at a given location for a given day unimodal?
1
strange moonset around 10 pm (3.2 2014, NZ) - explanation?
1
Longitude of the Ecliptic
9
Why haven't I seen the Moon?
3
Length of a tidal day or by how much is the Moon late each day?
6
Difference in time between sunset and moonrise on a full moon
2
How many days a month can you see a moonrise during daylight?
10
What orbital period would produce one New Moon (and one Full Moon) each year? What other effects would this produce?
4
What is the duration of the era during which it will be possible to perceive a total solar eclipse?