How can astronomers determine the difference between “hydrostatic equilibrium” and “just happens to be spherical”?

This is relevant for the definition of a dwarf planet.

I presume the answer will be, well, if we can tell the mass of the body and guess the material. I don't find this very satisfactory because (1) may be impossible and (2) will have large error.

Below about 100 km in radius, the answer is in general no. Given some population of randomly lumpy objects (like asteroids), some of them will be close to the shape of a sphere purely on accident. The composition matters too -- an object of this size made of hydrogen gas would assume a spherical shape from hydrostatic equilibrium, but an object made of rock might not (like Mathilde below). We could make better predictions given detailed knowledge of the materials and environment of the object, but this is not always possible, as you mentioned. For small objects, intermolecular and atomic forces dominate gravity. 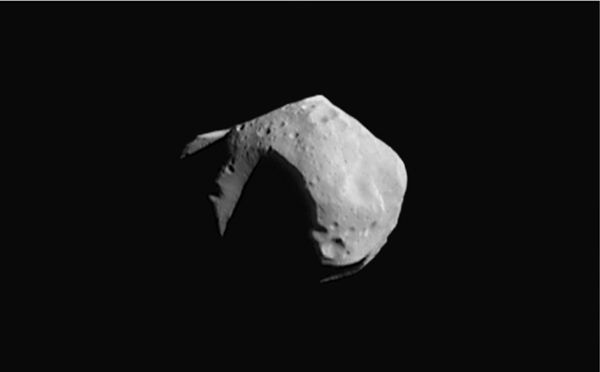 Once you get to a certain size of object, it becomes much easier to make a prediction about hydrostatic equilibrium. This is still very much context-dependent, and you still get complications from material composition, temperature, etc. However, atomic binding forces have some fixed strength, but gravity scales like mass. Given ordinary astrophysical materials, we can be very sure that a body like Jupiter is under hydrostatic equilibrium.

You can make some order of magnitude estimates by assuming that the atomic interaction energy must be at least as large as the thermal energy (Hughes and Cole 1995). If you check out equation 5 of that paper, you'll see an explicit expression for a radius that divides spherical objects and nonspherical ones. At some mass, the binding atomic energy becomes dwarfed by the gravitational potential, and you always get a spherical object.

So Earth and Mars are not in hydrostatic equilibrium. It is spherical for the good reason of being a massive body where its own gravity is enough to avoid big irregularities, but it is not supported by (fluid) pressure, but by (solid) incompressibility and material resistance.

On the other hand, Jupiter and the Sun are in hydrostatic equilibrium since the force that avoids them collapsing is actually (fluid) pressure.

Not the answer you're looking for? Browse other questions tagged gravity asteroids dwarf-planets hydrostatic-equilibrium or ask your own question.

12
What is the minimum mass required so that objects become spherical due to its own gravity?
3
Can objects enter hydrostatic equillibrium through processes other than the influence of gravity?

12
Can there be an object with planetary discriminant between Ceres and Neptune?
3
Why 225088 Gonggong is not a dwarf Planet yet?
9
Is Jupiter a dwarf planet?
8
Do astronomers generally agree that the distinction between comets and asteroids is not so clear?
0
What is the percent flattening in Haumea?
6
Are there any estimates for the combined mass of all near earth objects (NEOs)?
6
Is the Moon not in hydrostatic equilibrium?
4
Using a differential force in the derivation of hydrostatic equilibrium in a star