How Does a Refractor Telescope Work?

As I understand it, the difference between a reflector and a refractor is that a reflector uses mirrors on the back to reflect the light to the secondary mirror then the secondary mirror reflects the light to your eye focusing the image with each reflection. How then does a refractor use a lens to sharpen the image? Does it just sharpen the image and shoot it to the prism at the back, and into your eye?

All telescopes have in common that they gather and focus light from far away objects. They use a primary opical element, such as a concave mirror or a (planar- or bi-)convex lense (or lense system), and they use an eyepiece with another lense system (for viewing) or a camera in their primary focus.

A refractor telescope does not sharpen the image per se. The convex lense concentrates the light rays, not unlike a magnifying glass. To actually focus the enlarged image on your retina, you need an eyepiece, which is another bi-convex lense (in its most simple form). This will re-align the light rays after they passed through the primary focus. See this image for a visual explanation:

The above image also explains why the image of a refracting telescope appears upside down. You don't need (or want!) any prisms in this kind of setup.

On the other hand, a reflector telescope uses a concave mirror plus an eyepiece. There are different configurations, but one of the most simple and most common ones is the Newtonian telescope: 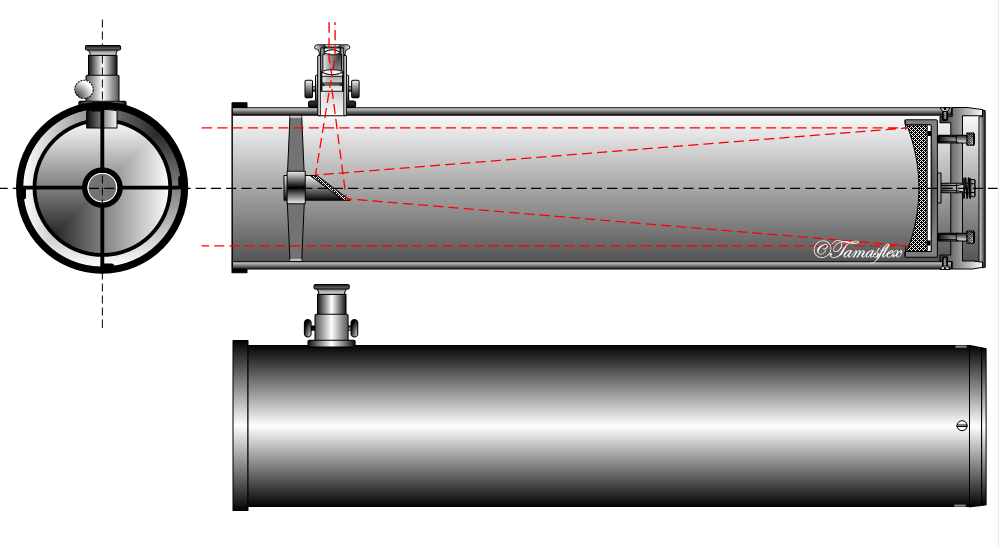 So instead of refraction of light by a lense, we use the reflection of light on a mirror, to enlarge the image. Focusing on the retina is again done by an eyepiece in the same way as with the refracting telescope.

The advantage of refracting telescopes is that there is no obstruction in the optical path inside the telescope. This is not the case with reflector telescopes. They usually have a secondary mirror in the middle of the optical paths, hence reducing light gathering performance.

Also, simple refractor telescopes will produce colourful fringes on object edges, called chromatic abberation, which is due to the glass used in the lenses. This can be compensated by multiple lenses, but this will make the refractor even heavier and more expensive.

Not the answer you're looking for? Browse other questions tagged amateur-observing telescope refractor-telescope .

9
Why are radio telescopes shaped so differently than optical telescopes?
6
Telescope collimation issue
1
What telescope is this, and how does it work?
2
In a reflecting telescope (Cassegrain), is there a difference between using a concave or convex secondary mirror?
0
Reflector vs refractor in terms of magnification, which one wins?
1
Did Edmund Scientific 4¼ inch Newtonians have 90° prisms as secondary mirrors in the 1970's?
0
Does anybody recognize this kind of prism?
1
What exactly is a Hamiltonian telescope? Is this one?